Airbus and Boeing crossed swords during the Singapore air show over their contrasting strategies in the widebody sector, with each questioning the other’s logic for product development.

Airbus’s new-generation widebody products comprise four models: the A380 superjumbo and three variants of the A350 twinjet. Its only in-production widebody twinjet is the A330.

Boeing is developing a multi-product line-up comprising three variants of 787, two 777X models and the 747-8I. It currently has the big twinjet sector to itself with the 777-300ER (and ultra-long-range -200LR), which will eventually be succeeded by the new 777X family.

The rivals each presented slides comparing their product strategies in the widebody sector during briefings at the show. Toulouse argues that its product line offers customers simplicity, while Boeing points to an even spread of aircraft across the 200-400 seat sector. 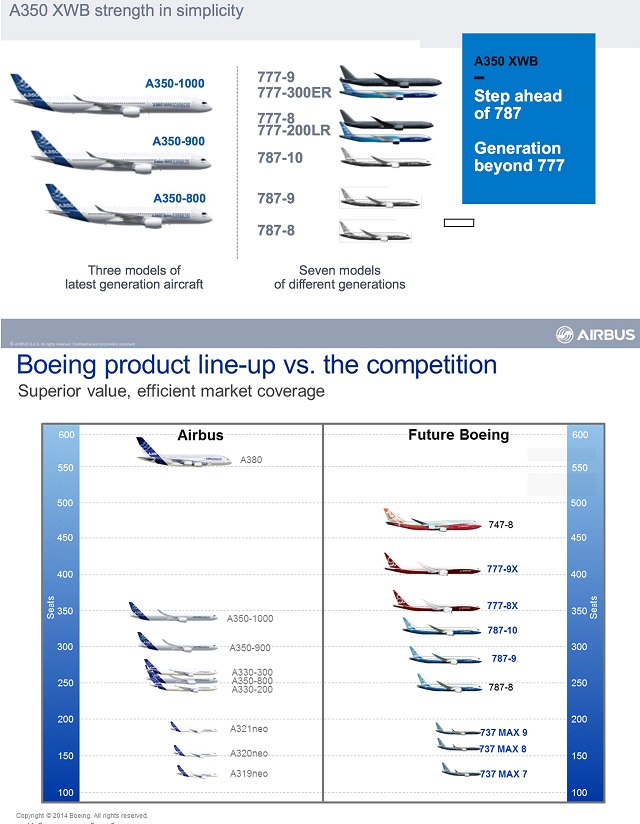 “Boeing has been waxing eloquent about how impressive their widebody product line is. Well actually it looks like a bit of a dog’s breakfast to me. If they’ve got the sweet spot in the market, there are an awful lot of sweet spots,” says Airbus chief operating officer for customers John Leahy.

However, Boeing highlights its sales success in the widebody sector as evidence that it has called the strategy right.

“We’re very pleased with how we’re positioned with our widebody product offering – from 200 to 400 seats we have a complete line of 787s and 777s in the marketplace. From orders, to deliveries, to backlog, we lead the competition,” says Boeing’s marketing vice-president Randy Tinseth.

“When I look at what the competition is doing, they’re clearly frustrated. The A350 looks too little, too late to the marketplace,” he adds.

Scott Fancher, who is Boeing’s general manager of airplane development, took a swipe at the smallest A350 variant, saying that while Airbus has “gained some pretty good traction with the A350-100 and -900, the A350-800 has not had the strongest traction out there”.

The future of the A350-800 has been subject to much speculation amid a shrinking backlog as customers migrate to the larger variants. Airbus is understood to be evaluating whether to address that market segment with a re-engined A330.

There has also been speculation surrounding Airbus’s strategy with product development beyond the 369-seat A350-1000, following Boeing’s launch in Dubai of the larger 777X family backed by 259 commitments.

Airbus chief executive Fabrice Bregier has left the door open to the prospect of an even larger A350 sized to compete with the 777X, but attributed Boeing’s decision to stretch the twinjet to the need for competitive economics.

“However, in the long run we are improving our product. So we have no short-term/mid-term plan to do that [a stretch] and we don’t think we have to do that, but we could well envisage additional members of the A350 family.”