Two years ago, Héroux-Devtek was a distant number three in the civil landing gear market, behind Safran’s Messier-Bugatti-Dowty (MBD) and the former Goodrich business of United Technologies (UTC). In most cases it supplied the big two with components rather than vying with them for prime contracts in its own right. Despite a heritage that included the then-Héroux suppling Grumman with the landing gear for the Apollo 11 lunar module, outside Canada and the landing gear community, few in the wider aerospace world would have even heard of the company.

However, that changed in late 2013 when Héroux-Devtek – based in Longueuil, a suburb of Montreal – snatched the contract to design and manufacture the main and forward landing gear for Boeing’s new 777X, as well as current 777 models, from UTC. It had previously supplied the US company with landing gear pistons for the large widebody. Chief executive Gilles Labbé describes the win as “the most important landing gear contract in Héroux-Devtek’s history”.

The decision took many by surprise, including, possibly, Labbé himself. He told us, when we visited for our Canadian special two years ago, that despite a strong position as a tier one contractor in business, regional and some military aircraft and as a tier two supplier for large commercial jets, Héroux-Devtek knew its limits. “With aircraft of less than 100 seats we think we can compete directly,” he said. “But in the 100-plus seat market, we team with the big boys.”

To mark its accession to the big league, Héroux-Devtek last month inaugurated a 10,000m2 (108,000ft2) factory in Cambridge, Ontario as its new “centre of excellence” for assembly of the 777 landing gear in the company of officials from Boeing and local politicians. Construction on the greenfield plant, near Héroux-Devtek’s existing plant in Kitchener, began in June 2014 and it will become operational in June – most of the industrial tooling is still to be delivered. Between then and January 2017, when the contract formally changes hands, Héroux-Devtek will continue to supply UTC.

Some believe the decision to vault Héroux-Devtek up the supply chain was taken as a warning shot to large contractors such as UTC: that Boeing is prepared to drop you if the price is not right. At the opening, Labbé acknowledged that there had been doubts that such a large arrangement could be undertaken by a relatively small business like Héroux-Devtek – it turned over C$272 million ($215 million) from continuing operations in the last financial year – but that the company was ready to deliver.

Speaking at the ceremony, Boeing’s vice-president and general manager of supplier management, Ken Fisher, acknowledged that switching tier one suppliers on a programme such as the 777 was a “big decision”, adding: “You can’t imagine how much planning has gone into this. I’m counting on you.” With a current backlog of 550 777s and 777Xs, he told the assembled Héroux-Devtek staff: “I hope you like to be busy. We’re going to be very busy over the next few years.”

Héroux-Devtek is investing C$54 million in the new plant, which will manufacture outer cylinders, main truck beams and the nose outer cylinder. The province of Ontario provided C$7 million. That support from the government is essential, acknowledges Labbé, who admits the company looked at alternative sites in Mexico, the US and elsewhere in Canada before settling on Cambridge, part of a cluster of industrial towns, one hour’s drive west of Toronto. 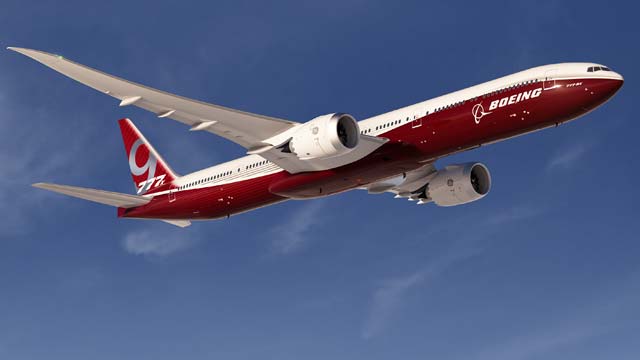 Proximity to its Kitchener site, which employs around 200 staff, was crucial as Héroux-Devtek wants to tap into a pool of trained workers. Cambridge will employ another 40. The plant will assemble the structures from components trucked in from Héroux-Devtek’s newly expanded factory over the border in Cleveland Ohio, and finished products will be shipped to another new plant next to Boeing in Everett, Washington, where Héroux-Devtek will open by the end of this year a further 2,000m2 facility for final assembly of landing gear. By 2017, output is expected to be 100 shipsets a year.

Labbé holds open the prospect of a doubling in size of the Cambridge site on the back of additional work from Boeing or another airframer. The company has secured adjacent land and one of the walls has been built in such a way that it can be moved to accommodate any extension. “We will be pursuing other options,” says Labbé, who led a management buyout of the then-$12 million turnover business in 1986 and is the major shareholder.

Labbé has led a transformation of Héroux-Devtek in recent years. After adding the Devtek business in 2000, the company slimmed by a third in 2012 when it sold its largely build-to-print aerostructures division to US company Precision Castparts. According to Labbé, the move gave the company focus and allowed it to invest in developing its own engineering intellectual property, essential to win tier one contracts to design and deliver to large airframers. The business is highly profitable, recording bottom-line earnings at more than 13% of sales in its 2014 fiscal year just ended.

The company’s sales currently remain slightly skewed towards the military market, where it has original equipment and aftermarket work on the likes of the Boeing CH-47 Chinook, Lockheed Martin C-130J Hercules and Sikorsky CH-53K King Stallion. A year ago, it added to its capabilities in the military fixed-wing and rotorcraft market when it acquired for $124 million from BBA Aviation Runcorn, UK-based APPH, which operates from four sites in the UK and one in Wichita, Kansas and has 400 staff, including 40 engineers. APPH’s contracts include the Saab Gripen, AgustaWestland AW101 and the BAE Systems Hawk and the business’s turnover in the 2013 calendar year was around $77 million.

The 777 contract is not the first time Héroux-Devtek has pulled off the unexpected. When it secured the contract to supply the landing gear on the new Dassault Falcon 5X, which was launched in 2013, it was the first time the French company had opted for a supplier other than MBD. Proving its worth on the 777 will allow Héroux-Devtek to compete on an equal footing with UTC and MBD for further big-ticket landing gear contracts. The builders could soon be busy again extending the new Cambridge factory.