Should Etihad Airways follow up its widely reported interest in buying into Alitalia, it would cap a year in which the Gulf carrier has been the dominant figure in the ever-expanding world of European carriers seeking investment.

Etihad has already this year invested in Air Serbia and Darwin Airline, two of the several European carriers to succeed in attracting new owners over the last 12 months. And there remains no shortage of cash-strapped airlines in the region hoping they may follow suit in 2014.

Speculation has been mounting that Etihad is close to agreeing a €300 million ($410 million) lifeline for Alitalia in exchange for a reported 30-49% stake in the struggling Italian carrier.

Both carriers remain silent over any possible deal, but if completed in the coming days or weeks, it would arguably be the Gulf carrier's most striking European acquisition yet. It would see Europe's 10th-biggest airline group by revenue join the Etihad club. And if not quite as big as Air Berlin in revenue terms, it would be the most established name among Europe's network carriers to be sold directly to owners outside of the EU.

Alitalia would join Etihad’s growing club of European carriers, which includes Aer Lingus, in which it has an almost 3% stake, and Air Berlin, in which it holds 29%. The Abu Dhabi-based carrier acquired a 49% stake in Serbian national airline Jat Airways on 1 August – since rebranding it Air Serbia – and in November took a 33% stake in Switzerland’s Darwin Airline. The latter will operate under the brand Etihad Regional from March 2014. In this role, it will both connect secondary and tertiary cities to Etihad’s network, but also work closely with Air Serbia and Air Berlin.

These acquisitions fit with Etihad’s strategy to connect ever more European and US traffic through its Abu Dhabi hub on the one hand, and traffic from Australia, India and other markets in Asia on the other.

Alongside acquisitions, the carrier has signed up a series of codeshare partners. The most recent addition, Greek carrier Aegean Airlines, appears to fit this model well, given the home market's links to the Greek diaspora in Australia.

One of Etihad's most significant codeshare deals has been with Air France-KLM, with which it is working on routes with Air Berlin as well. Air France-KLM is itself a long-term partner of Alitalia and operates a joint venture on Franco-Italian routes. 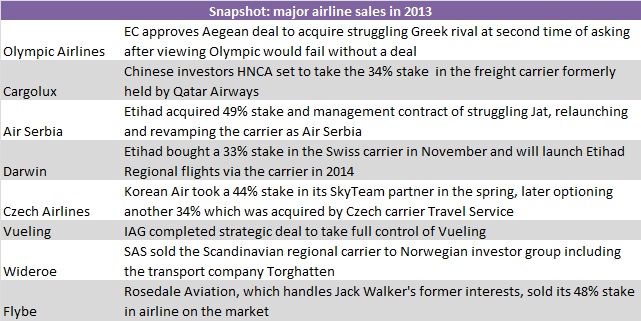 Etihad has not been the only investor in European airlines this year. One of the most notable deals was Korean Air’s acquisition of a a 44% stake in Czech Airlines for the bargain price of €2.64 million in an agreement that committed the Korean national carrier to retain a stake for a minimum of five years.

At the time, Korean stated that it planned to use its ties with Czech to make Prague of its European hubs. Both carriers are SkyTeam members and almost immediately extended their codeshare remit, paving the way for relaunch of long-haul flights through a Seoul service. Perhaps ironically, given the number of carriers adding capacity to Abu Dhabi, Czech Airlines will cancel its services to the UAE city in January in order to focus on its since-expanded Seoul-Prague route.

Other strategic acquisitions in Europe this year include IAG's lifting its stake in fast-growing Spanish low-cost carrier Vueling. The deal has brought the profitable operator fully into the group – and in stark contrast to IAG's restructuring Iberia – Vueling is rapidly growing.

Perhaps one of the most interesting strategic acquisitions this year was Aegean’s takeover of Olympic in October. Having blocked the tie-up on competition grounds in the past, the European Commission performed a volte-face when Olympic warned it would go out of business if the merger did not go ahead.

Several others European carriers have not yet secured investors. The deadline to privatise Romanian state airline Tarom has been extended until the end of 2013 and despite persistent speculation that a sale was imminent at the end of 2012, it seems likely potential investors will await positive financial data before considering a bid. 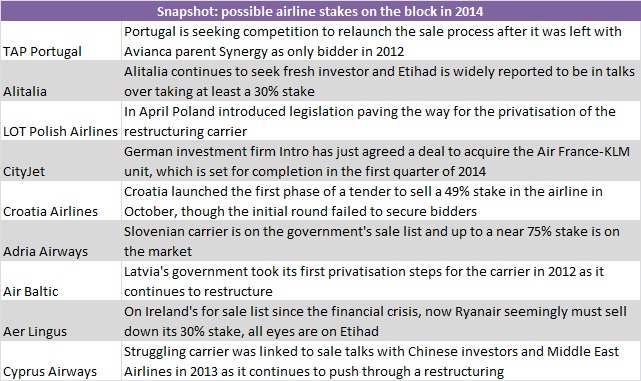 The same could be said of Croatia Airlines. A government-set deadline for bids for a 49% stake in the carrier has lapsed with no publicly acknowledged show of interest. The carrier continues a restructuring process to shave its losses and appear more attractive to investors.

Then there are the airlines which are on sale across Europe as a condition of states receiving billions in bailout packages following the economic downturn.

TAP Portugal is a case in point. A privatisation process was postponed in late 2012 when only Avianca parent Synergy made a bid which was rejected as too low. It seems likely to relaunch the process early in 2014 but is hoping to secure more bidders first.

Aer Lingus also falls into this category although now that Ireland has completed its bailout programme, the sale of the government’s stake in the carrier has been put on the back burner.

Adria Airways, LOT Polish Airlines and Cyprus Airways are among other carriers that will be hoping to secure fresh investor next year.