IAG chief executive Willie Walsh is no doubt celebrating after his predictions that Virgin Atlantic would scrap its Little Red domestic operation came true today – but it is not clear who will benefit most from the venture's demise.

Little Red will terminate flights to Aberdeen and Edinburgh in September 2015, and the nine remedial slots it used to operate them will be returned to IAG under the terms of the 2012 European Commission ruling that allowed British Airways' parent group to take over BMI.

Once returned, the slots will no longer be restricted to Scottish routes as they were for Virgin, says IAG, and can be used for whichever destinations from London Heathrow the UK-based group sees fit. But there is a catch.

Under the 2012 agreement, IAG must at one season's notice give up a set of remedial slots to any airline that comes forward with a request to operate routes to Aberdeen or Edinburgh.

So were BA to use the slots to start new services next year, it would do so at the risk of having to rejig its network again at relatively short notice if a new entrant asked for the slots.

But could another entrant be waiting in the wings?

Low-cost carrier EasyJet already operates services to Edinburgh from London Gatwick, while Ryanair will start a service from London Stansted on 26 October, and it seems unlikely either would want to operate from Heathrow. Then there is regional operator Flybe, which operates services from London City to Edinburgh and Aberdeen. Flights from Heathrow to these destinations might be tempting, given the carrier's emphasis on capturing business traffic, but competing against a carrier such as BA on its home turf could be a challenge Flybe is unwilling to take on. 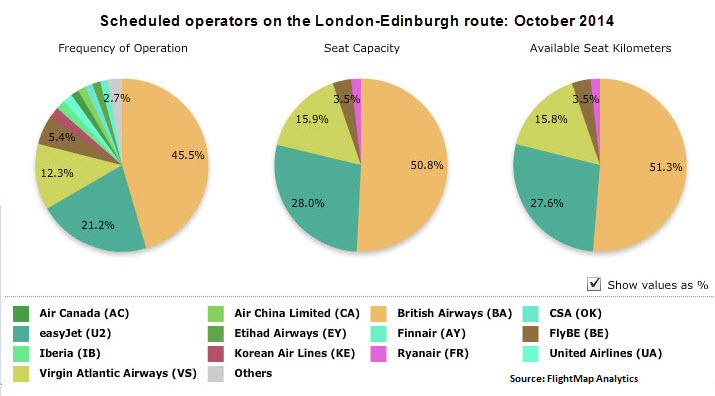 The most likely contender would appear to be Aer Lingus. When the 12 remedial slots from the IAG/BMI merger were made available in 2012, the Irish flag carrier also bid for them, but it lost out to Virgin. It could now try again.

It would make sense for Aer Lingus to apply for the slots given its stated aim of growing its presence at Heathrow, and it is already operating Little Red’s flights with its own metal under a wet-lease agreement with Virgin. If the slots went to Aer Lingus, perhaps Virgin could then codeshare on the Irish carrier's services. But to make it work, Aer Lingus would need to try to find ways to improve on the low average load factors suffered by Little Red.

Beyond the financial losses and punctured pride, Virgin should be able to bring its domestic experiment to an end relatively painlessly. The airline indicates that by continuing its Little Red operations until September 2015, it will honour its three-year wet lease contract with Aer Lingus without incurring penalties.

Virgin says that all of Little Red's staff are guaranteed an offer of a new job with Virgin's London-based operation. Meanwhile, the carrier is considering how it can accommodate connecting passengers coming from Manchester and Scotland.

One possibility could be to try to accommodate passengers on Virgin Trains services. "It could very much be kept very much in the Virgin family, but to be perfectly honest this is not something we have looked at yet," says the airline.

Virgin used its own slots for the Manchester-London leg of its Little Red business, and so the carrier is not under any obligation to give them up. In fact, Virgin says it is already looking at new opportunities once it ends Heathrow-Manchester services in March 2015.

Of course, Virgin may well choose to use the slots to operate additional long-haul services to the USA from Manchester. That would fit with its new emphasis on its joint venture with US carrier Delta Air Lines – and commit further forces to the transatlantic battle with IAG and partners.