First flight of the Pratt & Whitney PW1100G took off on 15 May, exactly as it was planned more than two years ago - and ended only moments ahead of a rain storm that nearly spoiled the inaugural test.

"It was Mother Nature or divine intervention that allowed us to [complete] the first flight before the downpour came in," says Bob Saia, P&W's vice-president of next-generation products.

The maiden sortie of the first of two engines selected by Airbus to power the A320neo kicks-off a year-long certification programme involving a total of eight engines on board the P&W-owned Boeing 747SP flying testbed.

Upon receiving certification for the engine alone, P&W will then ship the PW1100G to Airbus to install on the A320neo for another year-long flight-test campaign, leading to planned entry into service in the third quarter of 2015.

Most of the major design trades for the PW1100G are well in the past, but important tweaks to the configuration are still being made. Indeed, P&W confirms that it will remove a proposed feature for the PW1100G called a variable-area fan nozzle.

P&W's designers once believed such a unique moving nozzle was necessary. The 81in (206cm) diameter of the PW1100G engine exposes the fan blades to unusual vibrations in unstable air flow at low speeds, so closing the nozzle on take-off would smooth the air flow enough to prevent any chance of the fan blades developing a potentially disastrous flutter condition.

But the variable area fan nozzle also created new problems. It is another moving part in an already complex propulsion system, and so is yet another component for operators to maintain. Secondly, P&W faced the challenge of proving to regulators that the engine would still be airworthy if somehow the moving nozzle failed in-flight. The company believes it had solved that problem by designing the nozzle to fail only in the open position, but the US Federal Aviation Administration had not decided whether to accept that proposal.

In the end, P&W discovered the engine's fan blades were at no risk of developing flutter even without the moving nozzles. The manufacturer removed them from the PW1500G engine powering the Bombardier CSeries last December. Likewise, recent tests on the low-pressure system for the PW1100G confirmed the fan blades are strong enough to avoid developing flutter on take-off.

"It's capability at take-off is much greater than what we've seen in the past with a titanium blade," Saia says.

Removing the variable area fan nozzles is a clean decision, with no knock-on effects that require P&W to make tweaks elsewhere in the engine, Saia adds.

It does mean, however, that moving fan nozzles in aircraft engines is a technology that will have to wait. No decision has been made yet on whether to remove the system from PW1400G engine due to power the Irkut MS-21, a powerplant derived from the centre-line of the PW1100G. But it would be unusual for P&W to deploy the nozzles on only one member of the engine family.

The key technologies the manufacturer is introducing in the PW1100G are led by the fan-drive gear system, that de-couples the rotation speeds of the low-pressure turbine and fan, and also the ultra-high-bypass ratio inlet.

While the same technologies have already been tested in flight for the Bombardier CSeries and Mitsubishi Regional Jet (MRJ), both of those programmes pale in comparison to the monster order backlog of the A320neo programme. 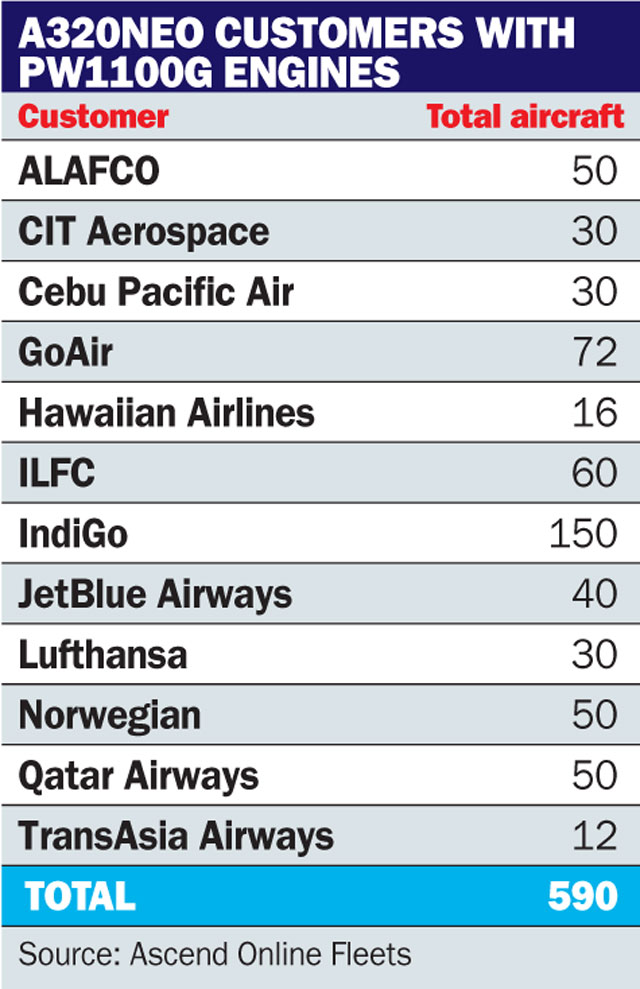 It was precisely the possibility of powering such an aircraft as the A320neo in the lucrative heart of the narrowbody market that drove P&W executives a decade ago to defy the conventional wisdom of a conservative industry and insert a fan-drive gear system into a new engine core.

That gamble represented the proverbial ripple that, with the clarity of hindsight, would spread out so that, within a few years of P&W's decision, nearly everything in the single-aisle sector of the aircraft market changed.

It is difficult now to appreciate how different the comparatively frozen industry dynamics appeared before the PurePower engine appeared on the market. The promise of an instant step-change in fuel efficiency offered by this new technology breakthrough made it possible for new entrants in Canada, China and Russia to seek to challenge the Airbus-Boeing duopoly on fair terms.

The launch of the CSeries, Comac C919 and Irkut MS-21, in turn, prompted Airbus to abandon a more patient strategy to develop an all-new narrowbody aircraft, and instead respond to the new competitive threats by re-engining its existing product.

The flood of orders unleashed by the A320neo then finally ­persuaded Boeing to follow suit and launch the 737 Max, with the CFM International Leap-1B ­engine. Meanwhile, the revived competition in the lower end of the narrowbody sector between the A319neo, 737 Max 7 and CS300 was enough to convince Embraer to wait another decade before upgauging the E-Jet above 130 seats.

All of this industry change occurred before the PW1100G even flew - P&W changed the market based only on projections and analysis of the PurePower engine's performance. Now, the 12 Airbus customers that have ordered 590 aircraft powered by the PW1100G can finally see how the engine actually performs under a wing after take-off.

The flight-test portion of a certification programme usually takes more than a year to complete, but the raw performance of the engine and its fuel efficiency can be loosely understood about one week after the engine's first flight.

The engine that flew aboard the P&W-owned 747SP testbed had already accumulated about 150h of ground testing at the company's facility in a relatively remote area of West Palm Beach, Florida. The ground tests established a baseline performance of the engine at sea-level, allowing P&W to compare the results to its analytically-based projections.

The data generated by the ground tests beat P&W's projections by four- to five-tenths of 1%, says Saia. "That's kind of in the acceptance range," he says. "We'd really like the engine to be in tenths of 1% from the model versus being 2% better than what we predicted, even though that may be a really good result. The bad thing is then that says our forecasting tools that we use don't have the fidelity that we wish that they did."

The same kind of analysis is performed within hours after the engine completes its first flight.

"If the airplane flew mid-afternoon, at our 8 o'clock meeting the next day our first analysis is complete," Saia says. "The fine-tuning of that analysis is about one week later."

The sharpening of the data involves analysing the actual fuel loaded into the 747SP's tanks on the day of the test. P&W bases its fuel efficiency predictions using 43mJ/kg (18,500btu/lb) as a baseline for the energy density of jet fuel, Saia says. But each load of jet fuel can have small variances in energy density that can distort the test results.

So, P&W takes a sample of fuel from the tank before take-off on the same day as the flight to make any adjustments. It takes two or three days to get the results of the analysis of the fuel sample from a laboratory. Meanwhile, P&W engineers are inspecting the test instrumentation installed inside the engine to check for any errors that could alter the performance assessment.

"Within usually a week after that flight the data is completely analysed and understood," Saia says.

Confirming the in-flight fuel efficiency of a new turbofan sold primarily on the strength of this measurement may seem like the most nerve-wracking of all the tests in the certification programme. By this point, however, the fuel efficiency performance should be well understood and an engine developer expects - and nearly always receives - no important surprises.

"We have really tested this engine. And although we haven't flown it we have over 150h on both the CSeries and the MRJ engine, so we know the sea-level to in-flight characteristics with the two little sisters," Saia says. "If there's an uncertainty of how this engine will operate it's within tenths [of a percentage point]. It's not a big deviation or big surprise that we're going to uncover."

If any tests provoke sleepless nights in a certification programme they will be what are known as the blade-out and triple red-line tests, scheduled near the end of the process.

The blade-out test, which confirms whether the fan case can contain a blade that separates at maximum power levels, is scheduled in the first quarter of 2014 - about six months before the scheduled engine certification milestone. The triple red-line test will follow the blade-out trial.