For Boeing, good news about the 787 has become, perhaps, sufficiently ordinary to push away memories of the nightmare years of the Dreamliner’s flight testing and entry-into-service. But the advanced technology twinjet is now arguably turning into a star.

As revealed by Flightglobal’s latest annual airliner census – a breakdown of the world’s commercial aircraft fleet by type and operator – the once-troubled 787 programme is racking up some seriously nice numbers. Over the past year, the type’s in-service fleet has increased by nearly half, to 423 aircraft. And, if output carries on as it has been, the 787 should by next year overtake its stablemate, the venerable 747, as measured by its active fleet.

Other highlights of the census, as detailed on the following pages, include the recent arrival in the figures of the Airbus A320neo, with 10 in service as of July: two with GoAir, five with IndiGo, two with Lufthansa and one with Pegasus.

Swiss opened the book on Bombardier’s CSeries, taking the first example in July. Our figures show that CSeries orders, at 364 units, amount to just 3% of the global narrowbody backlog – but the figures don’t include orders from lessors.

Another notable newcomer is Comac’s ARJ21; two of the much-delayed regional jets are now in service with Chengdu. But while China’s Comac expects to produce 30 ARJ21s annually by 2020, it has yet to receive production certification despite the programme getting type certificated in December 2014. This means it has had to get individual certifications for production of the regional jets.

In other regional aircraft, a notable development is the 9% reduction in the active Embraer ERJ-135/140/145 fleet, to 553 aircraft – pushing the Brazilian family a place below Bombardier’s CRJ100/200, with 560 examples. 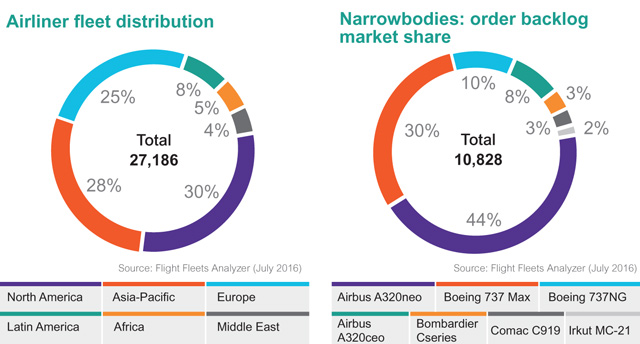 A particularly notable shift in the figures comes with the biggest aircraft of all, the Airbus A380. Year-on-year, the in-service fleet has grown since the 2015 census by a short 16% to 193 aircraft – but the orderbook has shrunk by more than a fifth, to just 93 aircraft. The other jumbo jet – Boeing’s venerable 747 – remains firmly in the global top 10 despite retirements outpacing deliveries of the new -8 variant to whittle the in-service fleet down by nearly 8% to 515 units. The rate of 747 fleet dwindle appears to be accelerating, but the type will almost certainly remain in the top 10 next year despite being overtaken by 787s.

When Airbus A350 deliveries begin in earnest, that type will begin a 787-style climb toward the in-service top 10 – but only then will the 747 drop out of that first division; without a surge of new orders, the A380 will remain a distant second place in the jumbo jet category for years to come. 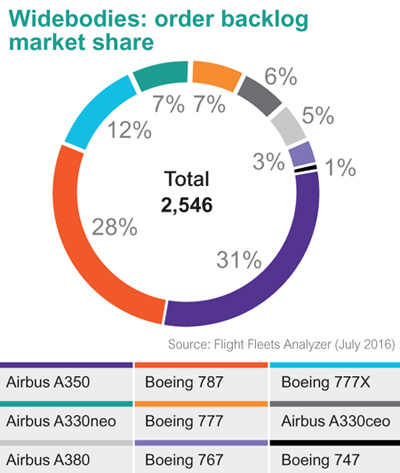 Not that the prospects for either type look attractive. Airbus’s decision, revealed at the recent Farnborough air show, to cut production to one aircraft per month in 2018 is an acknowledgement that the backlog is not being replenished anywhere near fast enough to support a modest delivery rate. Airlines are obviously free to place orders – but aren’t. Emirates is the only carrier that has gone big on the big platform, but Airbus has shown little enthusiasm for its call for an A320- or A330-style re-engining for greater fuel efficiency to create an A380neo. In short, there is some very real prospect of the A380 becoming a legacy type in the near future.

Likewise the 747; Boeing’s recent half-year results saw it rein in its already modest plans for the -8. A previously announced intention to lift output to one aircraft per month in 2019 has been scrapped – and, even then, Boeing says it needs to close more deals to keep production running at its current rate of 0.5 aircraft per month.

Perhaps more alarmingly, those half-year results may augur a turn in fortunes for both leading airframers. Boeing saw a reversal of fortunes to post a second-quarter loss of $419 million. Airbus commercial aircraft earnings were down by 70% to €421 million for the half year, on flat revenues of €21 billion. Some of those financial ripples were caused by production issues – Airbus took a charge of €385 million ($423 million) against the A350 programme over the second quarter, as a result of difficulties in production ramp-up, and Boeing’s $1.5 billion in pre-tax charges included its re-classification of $1.2 billion of 787 flight-test aircraft costs as research and development expenses.

But while both companies are clearly dealing with practical problems that stem from having developed hugely popular products that customers want to buy in large numbers – so-called “first world problems”, perhaps – they are also facing something new, or at least new in recent aerospace history: a slowdown of demand.

In presenting its first half analysis, Boeing made this very clear, taking care to prepare investors for a softening in demand for widebody aircraft. A planned rate increase for 787 is being re-considered, an already-slower rate of 777 output may not be sustainable and, for the 747, outright cancellation has to be taken as a possibility.

Airbus has more on its plate than A380 programme inertia, hitches in the A350 ramp-up and a first-half profit slump attributed to a “back-loaded delivery profile, lower A330 production and transition pricing on the A320 and A330”. For the half year, commercial aircraft order intake dropped by 30% compared with the year-ago period and profit – EBIT – before one-off charges was still down 17%.

At one level, of course, an orders slowdown is on its own little cause for alarm. After a three-year order boom, from 2013 to 2015, Airbus and Boeing have burgeoning backlogs and the principal challenge of building and delivering lots of aircraft. Given the complexity of organising mass production of such complicated products, some difficulties can hardly be unexpected. Deal with them efficiently and all is well. Unfortunately, a profits and orders slump comes against a background of rising geopolitical tensions and economic jitters, notably including slowdowns in the key Asian emerging markets whose voracious demand for airliners did so much to keep the aerospace industry buoyant during the recession following the 2008 financial crisis.

It is often said that the Airbus-Boeing order backlog is so large that even an unprecedentedly large number of cancellations would not materially upset economics of the aerospace industry. Some pressure off the delivery pace could even be a good thing. But the question now is: can aerospace shrug off another 2008-style financial crisis and global downturn? The answer, fortunately, remains to be seen – but even if there is no forthcoming crash, Western economies are overdue for the downside of their economic cycles. 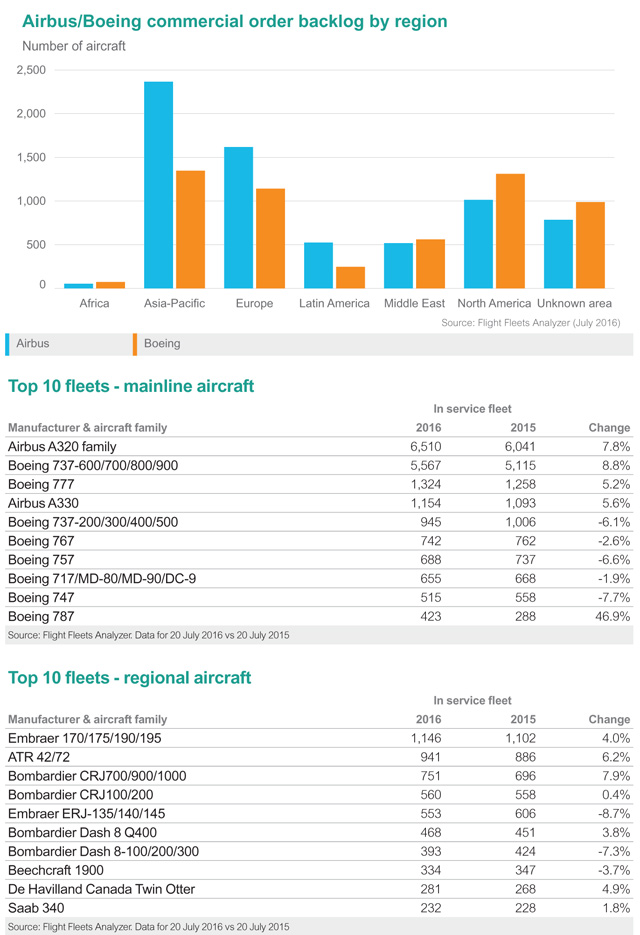 China’s financial condition, meanwhile, has many an expert worried. Any Olympic lift notwithstanding, Brazil is being hammered by both deep recession and an existential political crisis. Russia is suffering during the extended oil price slump. India, and much of Southeast Asia, looks anaemic.

FlightGlobal’s Farnborough air show order tracker suggests that a first-half orders slowdown will be the clear story of 2016. Farnborough 2016 saw 607 orders and commitments, and 135 options – a total of 742 aircraft spoken for. At Paris 2015 the comparable figure was 1,223; two years ago at Farnborough, it was 1,210.

Looking inside the Farnborough numbers – at mainliners – Airbus ruled the narrowbody orderfest, taking 390 commitments to Boeing’s 150. In widebodies, Boeing prevailed – 29 aircraft to Airbus’s 15. In money terms, as measured by FlightGlobal Ascend 2016 full-life base values, Farnborough 2016 accounted for business worth $38.9 billion. Paris 2015 was worth $69.1 billion.

All of these figures, of course, should be taken in context. For many years now, it has been a common refrain among aerospace industry executives – including those long enough in the tooth to have seen more than one downturn – that, simply, it’s never been so good. If the industry is now coming off that boil and faces a few comparatively challenging years, in all likelihood those years will still be classified as good times.