ANALYSIS: How Europe’s LCCs are getting down to business

The lines between low-cost carriers and their network rivals have blurred so much over recent years as to make segmenting operators by type almost academic.

Yet in Europe, while mainline operators have unbundled fares and stripped away services, and low-cost carriers have ended the boarding scrum and packaged up extra frills for a price, there has always been one constant: Ryanair.

Lowest cost, with fares and a service culture to match, the budget giant has come to embody the low-cost model – the heir apparent to Southwest Airlines. So the evolution over the last year, which has seen Ryanair’s various dalliances with customer service evolve into a fully fledged campaign to be liked is on the one hand pretty seismic.

Booking restrictions have been eased, the website and mobile site revamped, its marketing edge softened, customers engaged and a new proposition explicitly developed for business travellers. It has even begun creeping into more mainstream airports.

But the transition should not be overstated. Mainstream airports remain a small part of its network and its recent announcement of a base at Warsaw’s Modlin airport shows it has not lost its appetite for European secondary airports. Similarly, its decision to axe Lisbon-Faro in April, just three days after the route launched, shows its ruthless streak remains.

Neither has it abandoned its hard line on costs. Its adherence to an ultra-low-cost business model remains and should be helped by last-off-the-line Boeing 737 orders, and the BBB+ credit rating from Standard & Poor’s and now Fitch should help keep its finance costs in check.

“Ryanair’s strategic ‘transformation’, focused on improving customer service, continues to attract headlines – as was clearly the intention. However, as often with Ryanair, we think the story is somewhat exaggerated,” says Oliver Sleath, European airlines analyst at Barclays.

“Ryanair’s change in strategy is mostly about soft improvements that do not impact the cost base, which should help support passenger volumes as the company resumes growth, but are unlikely to drive up yields.

“The real change needed to push pricing – a fundamental shift into primary airports and higher frequencies – is actually happening relatively slowly. On a multi-year basis, we would assume that both unit costs and unit revenues remain relatively stable, and it is Ryanair’s top-line growth that continues to drive returns for shareholders,” he says. “So it’s an evolution, not a revolution.”

Given the timing of the roll-out of consumer-friendly products, it would be easy to view the shift in Ryanair approach as a knee-jerk reaction to its autumn profit warnings (although it remains one of the world’s most profitable LCCs). This would align with the view that the European market is getting full and that after more than a decade of stimulating air travel through low fares, the well is running dry.

Ryanair evidently does not believe its growth is going to stop. After deliveries completed late last year on its landmark Boeing order, it could have opted to keep its capacity levels tight and increase its returns by churning its network in favour of the more profitable routes. Instead it has put its money where its mouth is by ordering 175 new Boeing narrowbodies to support its target of lifting passenger numbers by 50% over the next decade to 120 million.

The thinking of LCCs of all shades seems to echo this view. Between them, EasyJet, Norwegian, Vueling, Pegasus Airlines and Wizz Air have ordered around 600 aircraft over the last 18 months.

In some cases, stimulating new travellers through low-pricing in the emerging markets of Turkey and eastern Europe will drive this growth. But for the likes of EasyJet, Norwegian, Ryanair and Vueling, the carriers are working in the familiar short-haul EU market. And a look through recent expansion plans underlines they are largely betting on growing at the expense of the network carriers.

It is not accidental that Ryanair’s new bases at Rome Fiumicino, Athens, Lisbon and Brussels National – and continued interest in Copenhagen – are home to European network carriers that have battled their own or national economic problems. Neither are they alone in seeing the opportunity, as Vueling’s own move into Brussels and Rome illustrates – although this raises the prospect of more intra-LCC competition over the coming years.

“The fundamentals have not changed for EasyJet: we are still competing with the legacies,” says EasyJet chief executive Carolyn McCall. The airline, which operates out of primary airports, sees itself particularly well placed to push the pressure on network rivals. “Legacy carriers are taking capacity out of the market and we are the ones putting capacity in. And therefore we are controlling the capacity environment,” she says.

This view is echoed by Ryanair finance chief Howard Millar. “We see a great opportunity because the flag carriers are still in cutback mode,” he says.

What has given the low-cost carriers so much encouragement is the rate at which European network carriers have retreated in short-haul markets over recent years. The likes of Alitalia, Air Berlin and Iberia have all scaled back. Innovata schedules data on short-haul European routes over the last five years for selected carriers illustrates the different pace between network and low-cost carriers.

Much of this has been driven by the restructuring of network carriers. The carrot for the stick of labour concessions is the possibility of a return to growth. But that growth seems unlikely to be driven by short-haul European routes. Any growth there is will be in hub-feeder rather than point-to-point markets.

“It’s all about point-to-point,” says Barclays’ Sleath on where the LCCs may target network carriers. “It is harder for low-cost carriers to compete in a transfer hub that is feeding long-haul – look at Frankfurt or Munich. But there are only a few fortress hubs like that, and plenty of other markets under-penetrated by LCCs where legacies are still flying pure point-to-point. Gatwick is a good example of what happens – 10 years ago BA had 50% short-haul share, EasyJet 15%. Now it’s the reverse.”

All of which goes to explain the gentle shift up-market by all LCCs, not just Ryanair. These carriers are positioning themselves as viable alternatives – both in frequency and product – if the national carriers continue to retrench. And in many cases, they will hope their presence at the airport will hasten this retrenchment.

Unlike its low-cost rivals, Ryanair – the European champion of the ultra-low-cost model – has more ground to make up in terms of positioning itself to fill the void. For example, while EasyJet and Vueling have always served primary airports much of Ryanair's network comprises secondary airports.

“I think the old Ryanair model of stimulating new demand on very thin routes is proving harder to come by,” observes Sleath. “Western Europe is approaching a level of saturation. There are only so many people who want to fly to the middle of nowhere.”

He notes that in some cases, the airline has in part moved from a city’s secondary to primary airport because some of its pricing advantage has been lost when low-cost rivals began operating from the primary airport. “The number of primary airports they serve has been very steadily picking up over the last five years, as other LCCs have shown up in the main airport and Ryanair found it had to discount more aggressively at the secondary airport,” says Sleath. “It’s not a sudden switch, but it is happening more, sometimes out of choice, sometimes not. It definitely means taking share more directly off legacy carriers, and they are talking about high-frequency routes much more than they did before.”

All this may sound familiar to EasyJet. Ryanair's low-cost rival has for a while been a very different animal, and has already taken several of the steps that Ryanair is now embarking on. EasyJet notes that 12 million during the 12 months to March 2014 – around a fifth of the total – were travelling on business. 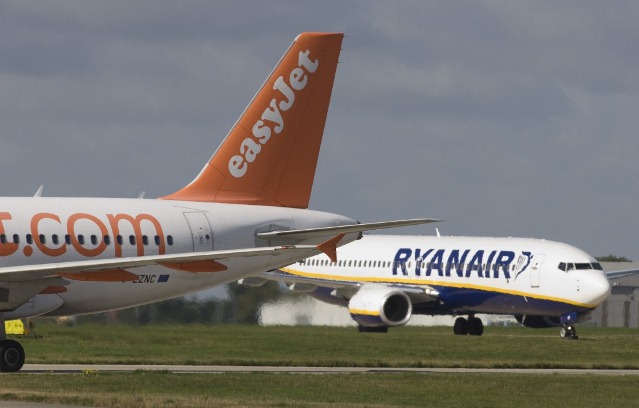 Ryanair stepped up the business-friendly initiatives last winter, shortly after issuing profit warnings amid a weakening demand environment. Ryanair’s Millar says that while this probably did “spur us on” to make the changes, this was something it was already looking at.

“We had been looking at what some of our competitors had been doing in customer service experience,” he says. “ But I give credit to EasyJet. We were watching quite closely how they were performing and what struck us… was their load factor was improving and their average fares was improving, for not that much difference in their product.”

He says the feedback from its own passengers showed the interest in things like allocated seating. “I think the low-fares industry has evolved, there has been another evolution. It is not just good enough to have low fares, you have to have something else.”

While he acknowledges this probably happened 18 months ago and that carriers like EasyJet had reacted to this change earlier, Millar sees Ryanair still strongly positioned. “We can catch up and catch-up very quickly,” he says.

“They are still a different model,” says McCall of suggestions that there is a merging of Ryanair’s model with its own. “They still adhere to being ultra low-cost and their predominant network is secondary and tertiary. We are low-cost and a primary, network strategy. And we’ll have to see whether they develop that and what that does to their ultra-low-cost model, which has always been part of their competitive advantage as they see it,” she says.

What is clear is the journey for Ryanair, if it intends to travel that far, will be a lengthy one. EasyJet’s transition has been steady one over a period of different management teams. McCall still sees plenty of ground for EasyJet to cover.

“We have the product, the contracts with TMC, the GDS, the sales teams, we now need to consolidate what we are doing and grow and develop, rather than trying to do more.

“I think we will continue to have a low-cost operating model and we will continue to improve everything that we do,” she says. “There is still so much we can do better. We have a big engineering contract coming up in 2015. There’s automation in airports, there are loads of stuff we can do both to improve the passenger experience and our own efficiency. So there is a lot of road to go.”

Also looming large in the Ryanair evolution is O’Leary himself. EasyJet now has some distance – though perhaps not as much as management may sometimes wish – from the airline’s vocal high-profile founder and shareholder Stelios Haji-Ioannou, who was so synonymous with its low-cost breakthrough. Likewise, the equally high-profile O’Leary has come to embody Ryanair, both good and bad.

Back in 2010, O’Leary was talking of completing three last challenges – breaking up the Dublin and BAA monopolies and a new aircraft order – before stepping down. Much of the work has been done now. So how significant is O’Leary to the airline’s future development?

“I think the public face O’Leary is less necessary than it was,” says Sleath. “The focus is shifting towards [new chief marketing officer] Kenny Jacobs, and there will be less need for PR stunts. But the smart-minded, hard-nosed businessman O’Leary – I think that is still quite integral. He works very hard and he’s really held the team together; up until Michael Cawley’s departure there had been very few senior management changes.”