India's airlines continue to struggle with high costs and competition, but a huge order backlog ensures major growth ahead.

A report released last year by the Federation of Indian Chambers of Commerce (FICCI) and consultancy KPMG predicts that by 2030, India will be the largest aviation market in the world.

Nevertheless, most airlines have struggled financially, with much of the blame put on high taxes for aviation fuel, which is up to 60% more expensive in India than elsewhere.

The FICCI-KPMG report notes that it is ironic that the taxes, imposed for the good of the nation, are actually preventing carriers from offering sustainable low fares to the public. That has led to most carriers underperforming.

“According to a rough estimate, nearly 99.5 percent of the world's third largest economy, have not seen the inside of an aircraft. Most Indian carriers therefore are facing financial ruin and are hoping for a white knight to bail them out,” the report says.

The new government of Narendra Modi has proposed a number of changes to regulations and taxes, designed to foster a stronger airline industry, most of which have been well received.

In the meantime, however, SpiceJet has shown that the struggle remains.

The budget carrier is set to return to the control of founder Ajay Singh, following its near-death experience in late 2014. Despite a network restructure and trimming of its Boeing 737 fleet to help cut its losses, in December the carrier was forced to delay some salary payments, and at one point had to cancel flights for a few hours after fuel companies refused to supply the airline. An 11th hour intervention by the Ministry of Civil Aviation allowed it to resume flights with only a few hours’ delay.

It's about working together

Jet Airways received salvation in 2013 when Etihad Airways took a 24% stake. Since then, the two carriers have worked together to turn around Jet’s fortunes, with network restructuring taking place, and the merging of budget unit JetLite with the mainline carrier.

State-owned carrier Air India continues to rely on equity infusions from the government, but appears to be turning the corner. In June 2014 it was accepted into the Star Alliance, and continues a major fleet modernisation project centred on 787-8s and A320s.

Despite the challenges, privately-owned IndiGo continues buck the negative trends. With a fleet of 88 A320s, it commands around one-third of the domestic market, and continues to grow – as evidenced by its agreement to sub-lease 12 additional A320s from Singapore’s Tigerair.

AirAsia India is 49% owned by Malaysia’s AirAsia, with local conglomerate Tata Group and Arun Bhatia holding 30% and 21% stakes respectively. The carrier started operations in June 2013, and now operates a fleet of three A320s.

Vistara is 49% owned by Singapore Airlines, while Tata holds the other 51%. Following delays in receiving its approvals, the carrier started operations from its Delhi base in early January. Starting with two A320s, it has signed leases for a fleet of 20 A320s, including eight A30neos.

Other carriers are also being planned. Business aircraft operator Air One is planning to expand into scheduled services, while Air Pegasus is planning to launch regional services later this year. Regional carrier ABC Airways had planned to launch services last year from Bengaluru, however those have not yet eventuated.

More successfully, regional operator Air Costa took to the skies in 2013. The carrier, which is owned by property developer LEPL group, now operates two Embraer 170s and two E190s, with plans for many more. 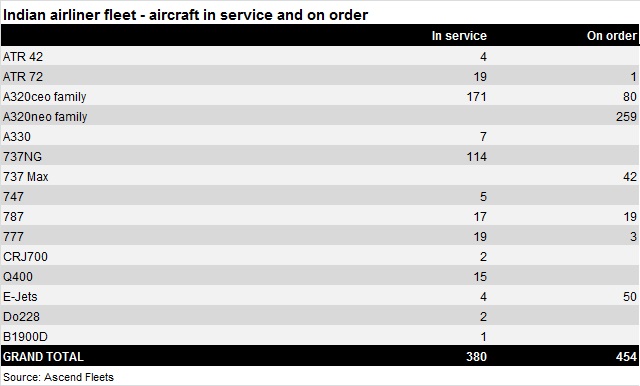 Indian carriers have largely built up their fleets with modern narrowbodies, which account for 75% of the total fleet of commercial airliners.

Air India, IndiGo and GoAir have long been A320 users, and have been joined more recently by AirAsia India and Vistara. Overall, this has given Airbus a 60% market share of the narrowbody market, Flightglobal’s Ascend Fleets database shows.

Defunct carrier Kingfisher Airlines, which has not operated a flight since being grounded in October 2012, was also an A320 operator. Airbus had been holding outstanding orders for 67 A320ceos, but it is understood that those aircraft have now been allocated to other customers.

On the Boeing side of the ledger, SpiceJet and Jet Airways have built their fleets around large numbers of 737-800s, with a handful of -700s and -900s/900ERs. Air India Express, the budget unit of the national carrier, also operates 737-800s.

As could be expected, forward orders for narrowbodies have stayed on trend . IndiGo and GoAir have placed orders for 180 and 72 A320neos respectively. Boeing has also secured a SpiceJet order for 42 737 Max 8s.

Jet Airways has previously hinted that it was looking at a Max order, last year telling Flightglobal that it had switched some of its 737-800 backlog for a “more fuel efficient variant.” Nevertheless, neither Jet nor Boeing have announced an order for the re-engined variant.

Air India has been looking towards the new generation of narrowbodies. Under government policy the carrier is not yet able to place direct orders, so it recently turned to the leasing market with proposals for both ceo and neo variants of the A320, with the preference to see a gradual rollover to neos. It is already in the process of replacing its oldest A320s, which were inherited from its merger with Indian Airlines, with leased new aircraft.

As narrowbodies continue to do the heavy lifting in India’s domestic skies, widebodies are expected to remain largely in the domain of Air India and Jet Airways.

Air India was an early customer for the 787-8 and initially had one of the rockiest entries into service of the type. Late last year, however, Nandan noted that the reliability of its fleet had grown to above 99%, and overall it is happy with the type.

Very quickly, the 787s have become the mainstay of the airline’s international fleet. It operates on a range of routes from Mumbai and Delhi to Europe, Asia and even out to Australia, as well as some of the denser domestic routes.

The carrier confirmed in December that it is evaluating a potential switch to the larger -9 variant for its final six aircraft.

Nandan says that the carrier no longer needs the final three 777-300ERs it has on order, and would rather convert them to 737-800s. It operates 12, with the aircraft focused on London and North America routes.

Air India is also nearing the phase out of its final two 747-400s. While the type operates some ad hoc scheduled services, they have largely been relegated to VIP duties, and were advertised for sale earlier this year by the airline, on behalf of owner Investec Bank.

The carrier also continues to seek buyers for its remaining 777-200LRs. Five were sold last year to Etihad Airways, and it has also sought proposals to lease or buy the remaining three. So far, none appear to have been forthcoming.

The future of Jet’s widebody fleet has a number of questions around it. Since Etihad’s investment, the Indian carrier has been playing a greater role in feeding its partner’s hub at Abu Dhabi, rather than pursuing its own long-haul growth strategy.

Consequently, the carrier has leased out 11 widebodies to other operators. Etihad operates four 777s and four A330-200s, while Turkish Airlines has three A330-200s leased from Jet.

The majority of growth in Indian carriers has been focused on mainline and low-cost carriers, but regional operators have also been adding to their fleets.

Although it only operates four aircraft at present, Air Costa is in the process of sourcing up to eight additional E190s this year from various lessors. It also stole last year’s Singapore air show, announcing an order for 25 E190-E2s and the same number of E195-E2s, as well as 50 options. The first of the E2s is due for delivery in 2018.

Embraer’s vice-president Asia Pacific Mark Dunnachie says that having Air Costa operating E-Jets in India gives it a great “shop front” that could open up potential sales to other carriers. Nevertheless, he adds: “Our primary focus is the partnership with Air Costa.”

On the turboprop front, ATR continues to dominate over Bombardier, with Air India Regional and Jet Airways operating a combined fleet of 23 ATRs compared to 15 Q400s operated by SpiceJet.

Air India Regional has recently added new ATR 72-600s, giving it a step up in capacity from the ATR 42-300s that have been the mainstay of its fleet. It also operates four Bombardier CRJ700s.

Nandan has flagged that Air India Regional’s fleet could grow up to 40 aircraft in coming years, with the subsidiary set to play a key role in offering connectivity to the larger metropolitan centres.