Since the last Aero India two years ago, the torturous development of the Tejas fighter for the Indian air force (IAF) and Light Combat Aircraft (LCA) for the navy has continued. But while the outlook for the future Tejas Mk2 remains uncertain, the navy’s pragmatic approach towards the LCA programme could see India’s future carrier fleet operating a capable light fighter.

The Defence Research Development Organisation (DRDO) has been bullish about the LCA while the air force has treated the programme with benign neglect, understanding that it will have to look abroad for war-winning capability. Meanwhile there has been a studious "we have to make this work" approach from the navy team.

The LCA Navy programme began in 2003, when the government approved the development of a carrier-borne fighter aircraft on the understanding that converting the air force version to meet naval requirements would take about seven or eight years. The LCA Navy Mk1 was intended to demonstrate carrier suitability and compatibility and achieve Initial Operational Clearance (IOC).

But by the time the first Navy Prototype (NP1) made its maiden flight in April 2012, it was obvious that no matter what was done, basing the LCA Navy on the Tejas Mk1 would always be a sub-optimal solution. However, the programme continued to be of great help in terms of developmental flight testing, validation of important concepts and pilot training.

The second navy prototype, NP2, is expected to make its maiden flight by 31 March this year. An indigenously-built aircraft carrier, to be named INS Vikrant, will not be ready until the end of 2018 and two-year carrier suitability trials involving Navy Mk1 aircraft are scheduled for completion by 2020/2021.

In an example of long-term planning lacking in many of India’s indigenous programmes, the navy is now looking at a substantially-reworked Navy Mk2 variant instead of tinkering around with short-term fixes. Although it will have the same control surfaces, basic wing structure, fin and rudder, it is practically a new aircraft.

The Navy Mk2 design will be optimised to reduce supersonic and subsonic drag and have bigger intakes. A new centre fuselage will “provide additional volume to accommodate the landing gear from the start and free up space in centre fuselage and increase internal fuel volume significantly”, an official closely associated with the programme tells Flightglobal.

Both the air force and navy plan to use the General Electric F414 to power their Mk2 aircraft, helping to reduce landing gear weight by 300-350kgs (660-770lbs) – all existing Tejas aircraft use the less powerful F404. An increased fuselage length will also allow for better maintainability and improved distribution of equipment. 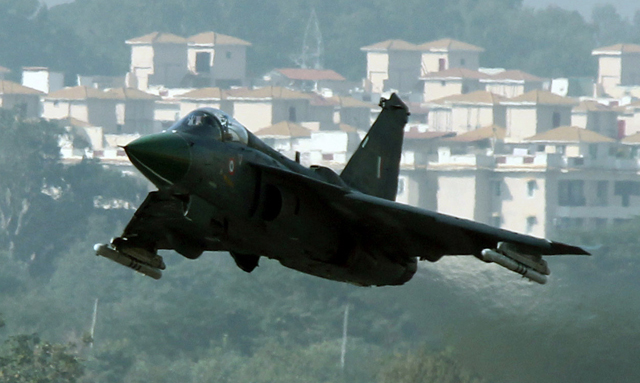 The preliminary design review (PDR) is to be concluded next year, followed by an aggressive two-year schedule for the detailed design phase.

The air force received its first series production example Tejas Mk1 in January, signalling the first step towards operational exploitation of the type in service. However, the air force appears to be losing patience with the Tejas. Retired AM M Matheshwaran, who stepped down as deputy chief of integrated defence staff in 2014 and is now strategy advisor to HAL’s chairman, says “the LCA has become an avenue for technology development. At the end of the day, the weapon system as envisaged by the air force is nowhere in sight.”

Looking beyond the Tejas Mk1, Matheshwaran says that “for the Tejas Mk2 to become a major frontline fighter for the IAF, there would have to be major aerodynamic changes.”

As things stand, the air force will not see a full squadron of Tejas Mk1s operational until 2019, while the first operational Tejas Mk2 squadron is at least a decade way.