Flightglobal's Order Tracker provides regularly updated details of all the firm and LoI commercial air transport announcements made during the Paris air show.

Ascend values business won at the show at $69bn;

Airbus says the aircraft, fitted with 18in seats, would be delivered between 2019 and 2024. The Wizz deal, which also covers 90 purchase rights, is the biggest single order for the variant, and the largest deal announced during this week's Paris air show.

That, combined with Boeing adding orders for 17 737-800s and four 737-900ERs for unidentified customers, took total order and option commitments during the air show to 1,223. Despite pre-show suggestions that there would be less business announced this week, it is 13 more than the number announced at the Farnborough air show last year. This included 224 options during Paris, 22 more than at Farnborough. 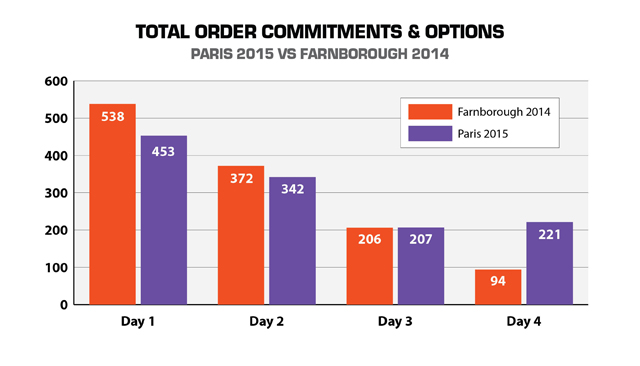 Flightglobal's Ascend equates this to over $69 billion in business. The order values are in 2015 dollars, based on Ascend’s 2015 Full-Life Base Values, as these are judged to more closely reflect the actual value of the orders, rather than the manufacturer list prices often quoted. 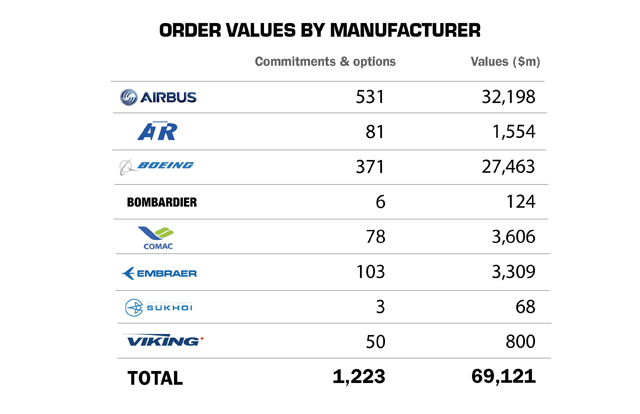 The Wizz deal pushed Airbus ahead during the week for orders and options – though Boeing always maintains it does not enter the air-show orders race – having secured 421 order commitments and 110 options. Boeing disclosed 371 commitments during the air show, of which 40 were options. 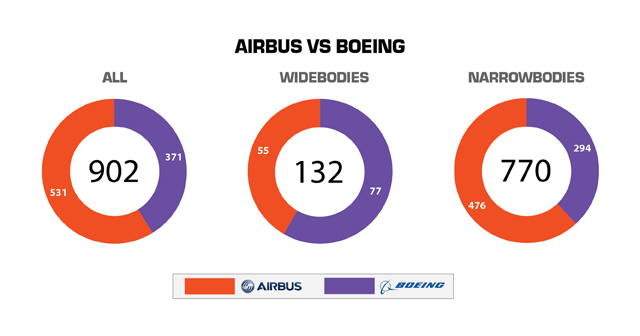 Airbus held sway with around two-third of the narrowbody deals, while Boeing secured 77 widebody commitments to 55 from Airbus over the week.

Deliveries of the additional 20 would take place over the next seven years, says Boeing, through a mix of purchase and leasing.

The US manufacturer also disclosed a follow-up order from Ethiopian Airlines for six 787s, previously attributed to an unidentified customer. Ethiopian is to take the six remaining early-build 787-8s. These are powered by Rolls-Royce Trent 1000 engines. Ethiopian already operates 13 787-8s powered by General Electric GEnx-1B engines.

On the Airbus side, it secured a commitment from Saudia for 20 of the regional version of the A330-300 under an agreement which will also include 30 A320ceos. It will the take the A330s on lease from Middle East lessor IAFC.

The carrier had already been revealed as an initial customer for the new lower-weight A330 variant, which is being aimed at high-density shorter routes. Airbus has confirmed that Saudia, which already has 12 A330s in its fleet, will be the first operator of the type.

Air Lease added a further Airbus A350-900 – the only lessor widebody commitment during the show.

Aircraft lessors though were again active players at the show, if at lower levels than at Farnborough when they signed for 576 aircraft. At Paris they committed to 369 aircraft, predominantly covering Airbus and Boeing narrowbodies. 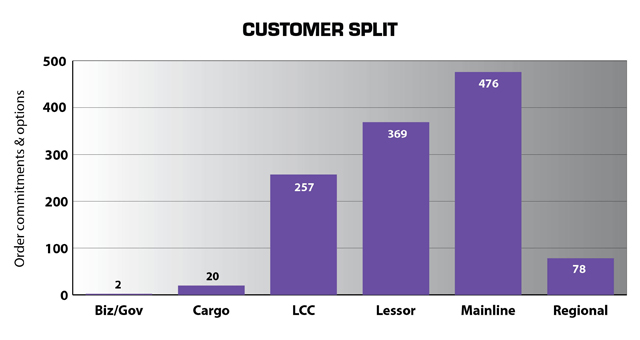 AerCap signed for 100 Max 8s, having ordered A320neos at Farnborough. Another lessor which had ordered heavily at Farnborough, SMBC Aviation Capital, came back for more, adding a further 10 Max 8s to the 80 it already had on order.

GECAS ordered another 60 A320neo jets, doubling its commitment to the re-engined type. Air Lease topped up with four more A320ceos.

Minsheng Financial Leasing signed an MoU for 30 737s, a mix of NGs and Max jets, while another Chinese lessor Ping An Leasing inked a letter of intent for 50 C919s, becoming one of Comac's largest customers. Aircastle also ordered 25 Embraer 190/195-E2s

Asia was comfortably the most active region, accounting for half the airline commitments during the show. Chinese carrier Ruili Airlines committed to 30 Max jets with financial support from AVIC International Leasing. 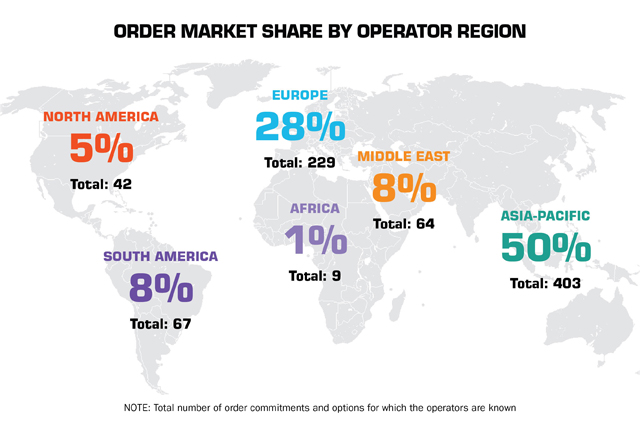 Airbus also said an undisclosed Asian carrier has inked a memorandum of understanding for 60 A320neos.

The second-largest airline commitment for a single type came from Synergy Group, which signed a letter of intent for 62 A320neos for its Avianca Brazil unit.

In other Airbus activity, Air Astana emerged as the first to secure a lease of the long-range version of the A321neo. The aircraft will come from the jet's first customer, Air Lease.

ATR revealed Cebu Pacific as the launch customer for its high-density ATR 72-600. The Philippine carrier ordered 16 of the type and took options on 10 more. The aircraft are equipped with 78 seats. It also secured it first Japanese customer, after Japan Air Commuter signed for eight ATR 42-600s.

Chinese investor Puren Group signed for seven C919s and seven ARJ21s. The aircraft are for start-up Puren Airlines. This was on top Ping An Leasing's 50-strong C919 commitment.

Alongside its Aircastle order, Embaer also secured orders from US carriers United Airlines and Alaska Airlines, as well as Chinese start-up Colorful Guizhou.

Bombardier announced addition Q400s from Canadian carrier WestJet, while Russian carrier Yakutia Airlines signed for a further three Superjet 100s. While it added no new orders for its CSeries, which debuted at the show, Swiss did switch 10 of its 30 CSeries commitments from the CS100 to the larger CS300.

Note: Paris and Farnborough figures cover show announcements, and do include airline orders which may have been included previously as unidentified customers, as well undisclosed customer orders announced during the airshows. For Paris 2015, Ethiopian's order for six Boeing 787s and Sriwijaya Air's for two 737-900ERs were both previously included in Boeing's order and deliveries website as unidentified customers