​ANALYSIS: Qatar and IAG romance moves up a gear

Qatar Airways' decision to acquire almost 10% of IAG finally cements a long-running courtship between the two.

It also represents another foray into overseas investment by the state-owned Qatari carrier. The first ended abruptly when the airline decided to sell its 35% stake in Cargolux after failing to reach agreement on the freight operator's restructuring.

With regards to IAG and Qatar Airways, there is a strong personal relationship between their respective chiefs Willie Walsh and Akbar Al Baker. Each has publicly stated admiration for the other's leadership and strategy style, and it was no coincidence that IAG's British Airways was Qatar Airways' "sponsor" when the latter joined the Oneworld alliance. The two airlines already have a cargo tie-up and have been working on a commercial partnership.

Speaking at the UK Aviation Club in 2012, Al Baker praised the pragmatic attitude displayed by Walsh towards the Gulf carriers in contrast to the usual antagonism from legacy-airline quarters. Al Baker urged his critics "to learn from Walsh", adding: "He has been an admirer of the Gulf carriers, and I would like to thank him for standing up to his beliefs, being vocal about the dynamism that the Gulf is bringing to the global aviation industry."

From IAG's perspective, a shareholding deal with Qatar Airways has been on the agenda since before the group's creation. Back in 2010, the Doha-based airline was rumoured to be on the infamous "list" of potential partners drawn up by Walsh as he sketched out the future framework for the embryonic IAG. Amid speculation about IAG and Qatar back in 2011, Al Baker told Airline Business that he would welcome Walsh to the Qatar Airways board and would be "open" to the BA/Iberia group buying a stake if Qatar Airways launched an IPO.

Since abandoning its Cargolux shareholding in 2012, Al Baker has continued to explore other minority investment opportunities but emphasised his interest was only in "successful carriers" and that there were no aspirations for an Etihad-style network of investment partnerships. "We will not take any stake in a carrier that needs somebody to rescue it," he said during 2014.

One airline with which Al Baker has expressed interest in partnering is successful Indian low-cost carrier IndiGo. He said last year that the airline was attractive for a potential tie-up either as a commercial partner or even through an equity holding, but the two sides had not held any talks at that point.

Qatar has supplied little detail so far on the long-term ambitions behind its equity deal, saying the acquisition "represents an excellent opportunity to further develop our 'Westwards' strategy". But observers wonder whether this is a stepping stone to a greater investment as there is little benefit to a minority shareholding without greater influence.

"We are all familiar with the limitations on cross-border investment, but it seems from Qatar's statement that this should be seen as a starting point," says CTAIRA analyst Chris Tarry.

Tarry points out that there is a question mark over the extent to which a minority investment "enables more things to be done and greater benefit realised" from closer commercial ties: "Clearly, there is a wide range of opportunities in any event – for example sharing facilities, costs and fleet – but it is not clear how a minority shareholding, other than as a statement of future intent, helps."

Qatar Airways is a rapidly expanding business with a fleet of around 150 aircraft. It carried almost 20 million passengers in the year to March 2014, and already-strong growth is now being boosted by the opening last year of its all-new hub, Doha's Hamad International airport. 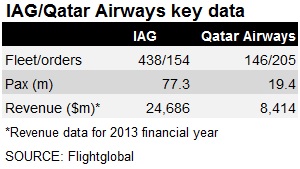 But Flightglobal data highlights that the airline is still a minnow in comparison with IAG (see table). The UK-based group's airlines BA, Iberia and low-cost carrier Vueling flew over 77 million passengers in 2014 and operate a combined fleet of 440 aircraft.

Confirmation of the Qatari investment rounds off a busy week for IAG, which was informed on 26 January that its latest bid for Aer Lingus was being considered. While no connection has been made between that deal and the Qatar Airways move, Qatar's local rival Etihad Airways is, ironically, an existing Aer Lingus shareholder, with a 4.1% stake.