The major focus of Singapore’s helicopter force is finding a replacement for its main transport rotorcraft.

The Republic of Singapore Air Force (RSAF) is somewhat unique in operating the vertical lift assets used by sister services, the army and navy. That said, Singapore’s balanced, realistic approach to defence procurement means helicopter assets are not neglected at the expense of other priorities. Indeed, one of Singapore’s biggest requirements concerns the replacement of its Airbus Helicopters AS332/532 Super Puma/Cougars.

Flightglobal’s Fleets Analyzer shows the RSAF operates 76 helicopters, divided into four types. The fleet earmarked for army usage comprises 32 Super Pumas in the troop transport/utility mission, 16 Boeing CH-47SD Chinooks, and 17 AH-64D attack helicopters. Singapore also has six Sikorsky S-70B helicopters equipped for naval missions including anti-submarine warfare (ASW) and anti-surface warfare (ASuW). It has two additional S-70Bs on order, but their configuration has yet to be announced. There are also five H120s used for training.

At this year’s Singapore show, a key focus will be the Super Puma/Cougar replacement – known locally as ‘Super Puma replacement.’ Some observers speculate this programme has been in play for nearly a decade, although Singapore’s secretive defence establishment has said little publicly about its plans. News Singapore will replace these aged aircraft, which have served for nearly 30 years, came in March 2015, when defence minister Ng Eng Hen told the country’s parliament replacements are necessary and “this will occur over the next decade.”

Ng made no mention of how many airframes will be obtained, but any initial order for new helicopters is likely to be for 20 or fewer airframes. A subsequent order could see the Super Pumas ultimately replaced one-for-one, but Singapore has never stated its intentions on this matter.

Major helicopter manufacturers are, naturally, interested in the requirement, but decline to provide details, citing customer sensitivities. Nonetheless, it appears Singapore could be interested in replacing its Super Pumas, which have a maximum takeoff weight (MTOW) of roughly 8.6t, with a larger and more capable aircraft, perhaps featuring a rear ramp.

“Singapore's Super Puma replacement will be weighed with these factors in mind: ease of maintenance, hot weather capability and durability and payload if a unit-for-unit replacement is not the preferred procurement route,” says Forecast International analyst Dan Darling. 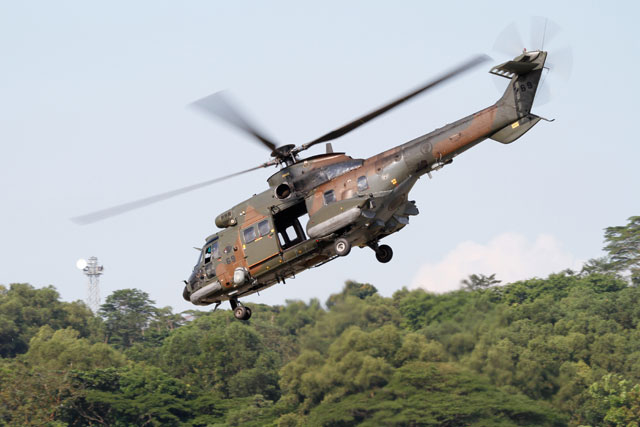 Other industry observers feel ease-of-maintenance will rank highly in Singapore’s selection. As a small nation with limited human capital, the fewer personnel required to maintain aircraft the better. Indeed, in the naval regime Singapore has tended to highlight how its newer warships require smaller crews. A consistent theme in military communications is doing more with fewer personnel, and leveraging technology as much as possible.

At the 2014 show, Bell/Boeing promoted the V-22 Osprey tiltrotor aircraft. The type appeared on static and participated in the flying display with activities including a flight for journalists. The Osprey, with its MTOW of 21.5t and ability to fly long ranges at high speed would probably be far too capable (not to mention expensive) for most of the general utility and transport missions undertaken by Singapore’s Super Pumas. Were Singapore to obtain the Osprey, it would probably be in small numbers and earmarked for use by special operations forces.

In US Marine Corps service the Osprey has also proven its usefulness during humanitarian relief operations. This could be an important consideration because Singapore prides itself on providing timely disaster relief in neighbouring countries.

Other types that could be in the running include the Sikorsky S-92 and NH Industries NH90. Sikorsky has never discussed what, if anything, it is offering for the Super Puma/Cougar replacement, but at the Imdex Asia 2015 naval show in Singapore it displayed a model of the S-92 equipped for combat search and rescue. The S-92, with an MTOW of 12t, is also considerably larger than the Super Puma/Cougar. One challenge with the S-92 is that despite its success as an offshore support helicopter for the oil sector, it has not achieved great popularity as a combat helicopter.

The NH90 is marketed in the region by Airbus Helicopters, which has a large

Like the Osprey and S-92, the NH90 has a ramp. Its MTOW of 10.6t is closer to that of the 8.6t Super Pumas and another possible benefit in selecting the NH90 is that two of Singapore’s key military allies in the region, Australia and New Zealand, operate variants of it – the type is designated MRH90 in Australian service. Land-scarce Singapore has a permanent training mission in Australia, so helicopter commonality could be an attraction.

Another compelling argument for the NH90 could be its ability to operate from both land and warships. Australia plans to operate its MRH90s from the decks of its two new Canberra-class landing helicopter dock (LHD) vessels. Singapore has operated its Super Puma/Cougars from the decks of its amphibious assault ships, and even deployed the capability as far afield as the Gulf of Aden in support of international anti-piracy efforts.

Moreover, there is evidence Singapore could be contemplating its own LHD. At local defence shows over the last few years, Singapore shipbuilder ST Marine displayed a model of a flat top designated the Endurance 160. The 164m long vessel would have a full, aircraft carrier style flight deck capable of accommodating five helicopters, with a hangar below with capacity for four. Such a warship would not only be capable of handling aircraft the size of the NH90 and S-92, but also Singapore’s Chinooks. In addition, the British army has successfully operated its Apache helicopters at sea. 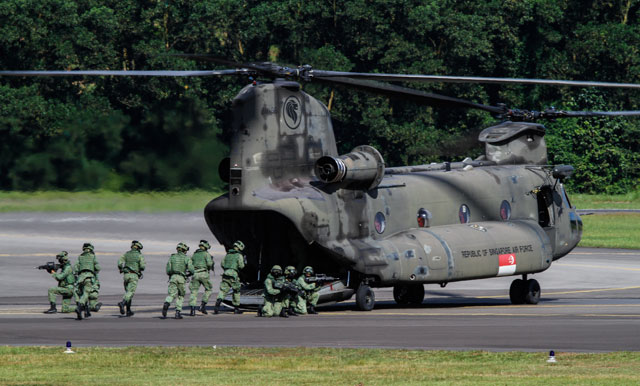 That said, Australia’s experience with the NH90 could also cut the other way for Singapore, which prefers to buy proven, low-risk defence solutions after considerable review and reflection. In September, Royal Australian Navy Rear Adm Terry Dalton, head of helicopters with the Australian Defence Organisation, warned NH Industries it must continue its effort to rein in the scope of its NH90 helicopter programme “towards a more manageable number of versions” for the rotorcraft to be “truly a success.”

Of the several NH90 customers bearing the scars from a painful development process that resulted in a 10-year delay, Canberra’s procurement of a planned fleet of 46 helicopters was one of the most painful. The programme remains five years behind schedule, and is likely to slip by a further 24 months, said Dalton.

Although Dalton says the “aircraft has a lot of potential” and is a “great helicopter to fly” – as well as conceding a number of issues such as floor and windscreen cracking have been resolved – Australia’s fleet still lacks fast-roping capability and door guns – “all those things that make a helicopter a true military asset.”

If Singapore goes with a larger helicopter such as the NH-90 or S-92, as appears likely, it will have a decidedly lopsided helicopter fleet, dominated by large, heavy-lift types. Fleets Analyzer shows it has nothing in the mid-sized or light utility categories. It is not clear if a requirement for a smaller type will emerge, although it could make sense to have a helicopter such as the Bell OH-58D to support the Apaches, or even a small fleet of utility helicopters, which could also support special forces.

Irrespective of what Singapore eventually decides, helicopter makers will be out in force at this year’s show. With tight defence budgets at home, being selected to fill Singapore’s helicopter requirements would be a major win.

With additional reporting by Dominic Perry in London

Keep up to date with all the new, opinions, and analysis from the Singapore Airshow on our dedicated page