If the challenge facing new Lufthansa group chief executive Carsten Spohr was not clear before, it is now after the airline’s recent downgrading of its earnings outlook on news that its flagship Score efficiency programme will not reach target.

Just a matter of weeks after the departure of chief executive Christoph Franz – whose signature Score cost-cutting and revenue-improvement programme was originally aimed at raising group operating profit from €820 million ($1.1 billion) in 2011 to at least €2.3 billion by 2015 – Lufthansa now revealed it expects to fall short of this target with earnings of €2 billion “provided conditions remain stable”.

It has wiped €300 million from its operating profit forecast for the year, to €1 billion, on lower-than-projected sales in its passenger and cargo businesses. Specifically, the carrier cites low ticket prices due to overcapacity in the airline’s main business areas in Europe and on transatlantic routes to North America.

While the airline is to react with what it calls “noticeable” capacity cuts this winter, its own strategy has contributed to this extra supply. “One of the fundamental problems facing Lufthansa is they have been increasing the size of their aircraft,” says Shakeel Adam, managing director of consultancy Aviado Partners, who adds he was not surprised to see the airline struggle to meet its Score targets as a result. “In theory, that means they have a lower unit cost. But that only works if you can fill a bigger aircraft without diluting yields.

“In this industry supply and demand have to match,” says Adam. “Volumes have been down during the financial crisis, and yields have been crashing. You cannot be in the market of pumping out volume in this market.

“This is an industry obsessed by load factor," he adds. "But that only made sense when you had stable yields. Anyone can fill their plane by giving away seats.”

While the size of Lufthansa long-haul fleet has not grown appreciably faster than rivals Air France and British Airways for example, it has a larger proportion of ultra-large aircraft. Indeed, 25 of its new aircraft deliveries over the last five years have been Airbus A380s or Boeing 747-8s, which together represent almost a quarter of its long-haul fleet. The carrier, for example, adds at least 12 seats per flight to a market when it replaces an up-to-352-seat Boeing 747-400 with an up-to-364-seat 747-8 on a route. 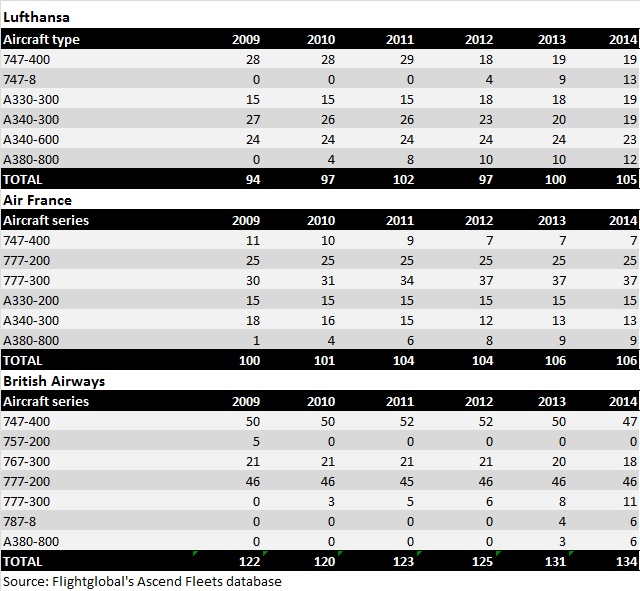 “There’s little doubt that Score has fallen victim to the old Lufthansa mentality of growing your way out of a cost problem,” says Oliver Sleath, European airlines analyst at Barclays, echoing the view that efficiency savings from the new aircraft are being countered by lower yields. “After two years of being relatively disciplined, they’ve bounced back to 5% capacity growth this year and the market cannot absorb it. Unit revenue is falling faster than unit costs, and profit is going nowhere.”

Both Sleath and Adam see it as a particular challenge that the transfer model at the German carrier’s Frankfurt and Munich hubs is under pressure, especially from the fast-expanding Gulf carriers. “The problem they have is, the demand they need to fill the bigger aircraft is not going to come as it operates from connecting hubs in Munich and Frankfurt. The US and European airlines they are competing with are coming into strong O&D markets,” says Adam. “Being a connecting carrier, they are more exposed to the Gulf carriers.”

Lufthansa struggles to generate sufficient long-haul business in the regions around Frankfurt and Munich. A high proportion of BA and Air France-KLM’s passengers are originating from the airlines’ respective home bases in London, Paris and Amsterdam, but Lufthansa depends on customers travelling to and from cities such as Berlin, Dusseldorf and Hamburg. This is largely a result of Germany’s federal nature. The population is more evenly distributed across the country, and public life and economic activity is less centralised than in nations such as France and the UK.

However, it is in those vital secondary cities that the Gulf carriers have established their presence. For passengers, meanwhile, choosing to fly via a Middle Eastern hub makes little difference in travel convenience as they would otherwise have to connect via Frankfurt or Munich.

The pressure from the Gulf carriers also explains why the airline has also looked to direct most of its extra capacity onto transatlantic routes. “We feel that the North Atlantic, for us, is an attractive growth market,” Franz said in January, explaining group plans for “above proportional growth” for the region as compared with the rest of its network over the next few years. “We clearly feel that there is less pricing pressure as compared to Asian businesses,” he says.

Sleath says: “You can understand why they’d pick North America. That market has consolidated and become very disciplined, and probably appeared to have the best chance of absorbing additional capacity. But fundamentally, demand for transatlantic flights is not growing at 7.5%, which is the rate Lufthansa decided to add seats.”

He also believes Lufthansa is growing in a "fairly lumpy manner", with extra frequencies or higher-density aircraft being applied across many of its routes. “It’s interesting to note that British Airways, on paper, is growing nearly as fast as Lufthansa to the USA this year. But that’s a more balanced approach, including substitute flying for American, a new route to Austin, and out of a hub with stronger pricing power [Heathrow]. As a result, BA is able to hold its yields relatively flat.”

Unlike its European rivals Air France-KLM and BA – which are respectively co-operating with Etihad Airways and Qatar Airways – Lufthansa is still trying to fight its corner without a Middle East partner, despite the changing market with the Gulf carrier’s growing grip particularly on Asian routes. Lufthansa has been vocal in criticism of Gulf carrier expansion in the past, though last year Franz left the door ajar to a partnership with a carrier in the region, while Lufthansa previously held partnership talks with Turkish Airlines but the relationship has since cooled to the extent the German carrier ended its codeshare with its Star partner.

“Lufthansa needs Turkish a lot more than Turkish needs Lufthansa,” says Sleath. “Lufthansa has a strong north America network, but with aircraft like the 777-300ER, Middle East carriers can operate nonstop to virtually anywhere in the US. As times goes by, I don’t see what Lufthansa really has to offer to Turkish that they cannot do themselves.”

Sleath wonders whether Air India could become a potential partner as the Asian carrier joins Star Alliance on 11 July after its alliance membership moves were revived.

If Lufthansa is squeezed by Gulf carriers on long-haul, competition is equally tough in short-haul markets. Here, in keeping with Europe’s other network carriers, it has looked to counter the threat from low-cost operators by restructuring its point-to-point network. Its solution was to hand responsibility for its non-hub activities to its reinvented budget operations Germanwings.

“Germanwings appears on track to break even in 2015. Whether it is competitive in the long term is another question,” says Sleath. “It has a cost base 20% better than Lufthansa mainline, so the transition will deliver a €200m saving. But EasyJet and Vueling have unit costs that are 30% lower again, on our estimates, with a similar product offering to Germanwings, especially in the case of Vueling.”

Adam suggests the move to Germanwings has also had a harder revenue hit. “It is probably diluting fares more than they expected. Passengers will not pay the same to fly Germanwings instead of Lufthansa,” he says. Adam adds that because these passengers do not get the same loyalty benefits and advantages on Germanwings as they would on Lufthansa flights, this opens the way to customers using rival carriers for their long-haul flights instead.

He also believes costs are higher than originally envisaged as customers benefits have crept back in. “They are trying with Germanwings to make their first major cuts in cost since 2011. But they didn’t get all the concessions they wanted because Lufthansa passengers wouldn’t accept a stripped-down service. So now they have a rebranded Lufthansa,” says Adam

“The airline hasn’t taken the strong cuts since 9/11 that others have,” he adds. “Yes there are changes, lots of changes, but I don’t see a restructuring.” Part of the problem, he argues, lies in its labour challenges. “You would expect it to be easier and better because they have a works council that has more transparency with the numbers,” he says, noting that this should make its staff aware of the challenges facing network carriers. “But people look at the strong share price and the profits but don’t understand the contribution that comes from the non-flying business.”

Likewise, Sleath believes that despite being profitable, Lufthansa’s operating margins do not generate an adequate return on capital: “The airline industry needs to understand that being profitable is not good enough: you have to create value for your shareholders. Lufthansa is going to need a serious strategy rethink to get there.”