Virgin Galactic could be excused for looking a bit glum these days, with its suborbital tourism programme years behind schedule and grounded since a fatal crash last October. But while its dream of personal spaceflight may be on hold, its satellite-launching venture is bounding ahead.

Indeed, the highest-flying operation in Richard Branson’s Virgin Group empire is suddenly at the centre of one of the most ambitious – if not audacious – schemes in the history of commercial spaceflight. The first signed customer for LauncherOne, an air-launched rocket that will fly from the same carrier aircraft as the passenger-carrying SpaceShipTwo, is OneWeb, a UK-centred company preparing to orbit 900 – yes, 900 – small communications satellites to bring affordable broadband to anywhere on the planet.

As detailed at London’s Royal Institution on 25 June, OneWeb’s grand plan, so far backed by $500 million and with another round of fundraising to come, will not rely exclusively on Virgin Galactic. But to orbit the bulk of its constellation between 2017 and 2019 it has contracted for no fewer than 39 LauncherOne flights, with 100 options, to supplement 65 Soyuz flights from Arianespace to do the heavy lifting.

The satellites are being developed by Airbus Defence & Space. The first 10 will be built in Toulouse and the rest will come out of a facility to be established in the USA. The scale of the venture is not lost on Airbus boss Tom Enders, who at the London presentation described a “transformative” move from building maybe a dozen satellites yearly to building 300-400: “Building these satellites is a project of the new space age.”

Virgin Galactic’s role in the deployment is supplemental but critical. Depending on the size of the satellites – less than 150kg, but they may shrink further as development continues – each Soyuz will be able to heft about 36 to low-Earth orbit, while a LauncherOne rocket will handle one to three.

Chief executive George Whitesides tells Flightglobal that LauncherOne may do some of the initial deployment – OneWeb wants to get some spacecraft into orbit in 2017 and Soyuz flights won’t start until 2018 – but rapid response is the key: “What we’ll shine at is replenishment, to fill gaps whenever necessary.” OneWorld founder Greg Wyler said he needs to be able to replace a faulty unit within 24h.

That rapid response underpins LauncherOne’s appeal. Virgin Galactic is working to a $10 million launch cost, which at first glance does not look like good value for OneWeb. Arianespace is understood to charge about €64 million ($71 million) for a Soyuz flight from Kourou and €40 million from Baikonur, but to orbit the 36 satellites packed on to one rocket would cost up to $360 million with Virgin Galactic.

But that $10 million price point is significant. LauncherOne is being designed to lift up to 225kg to a low-inclination, low Earth orbit or 120kg to a high-altitude Sun-Synchronous orbit, both of which are valuable for Earth observation to small operators and scientific missions. These are just the sort of missions that struggle to get to space, as to afford launch they must typically go as secondary, “piggyback”, payloads and thus are beholden to the long lead times and delays that characterise traditional launches. 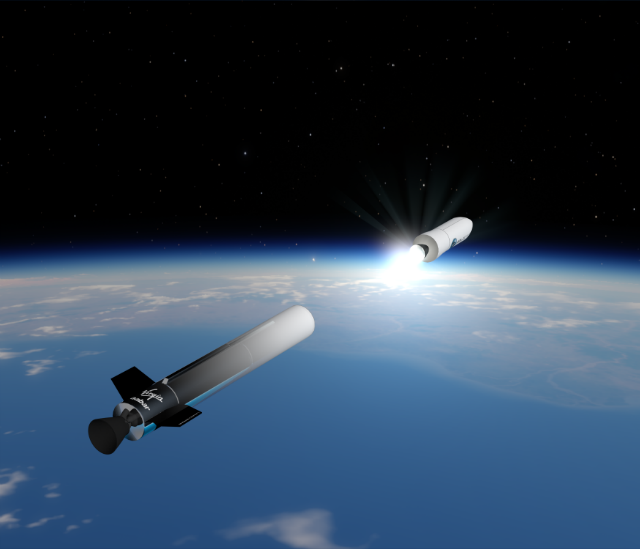 Will Pomerantz, Virgin Galactic’s vice-president for special projects, says the 225kg target is a “good middle point” for these customers. Soyuz, he says, offers the best dollar-per-kilo package, but Virgin Galactic’s appeal will be on “absolute cost”, as well as flexibility and speed, both of which are strengths of air-launch.

When Flightglobal visited the Long Beach site in May 2015, the factory floor was a still-mostly-empty 150,000ft², which Virgin Galactic had taken possession of a couple months earlier. Pomerantz, who joined the company four years ago from the X-Prize Foundation, described the operation as “relatively vertically integrated”, including “tip to tail” design of the rocket.

Until the Long Beach site is equipped, testing and manufacturing is happening at VG’s facility in Mojave. The programme is pushing for a first flight in the next 18-24 months, which could time nicely with OneWeb’s early deployment schedule.

Meanwhile, momentum is clearly building in Long Beach. A recent jobs fair offering 100 manufacturing positions attracted more than 6,000 visitors – perhaps no surprise, given the area’s long history in aerospace and the then-imminent shut-down of Boeing’s nearby C-17 plant.

Upstairs in the design department, Pomerantz already had 80 engineers at work, representing expertise from every US rocket programme. LauncherOne’s Newton engines are a tried-and-trusted two-stage liquid oxygen-kerosene design – Virgin Galactic, says Pomerantz, wants to “walk before it runs” with more exotic motors.

But those engineers, he adds, are meeting every day to discuss rocket size and cost, looking for “wiggle room” to offer a bit more payload capacity while learning the needs of an evolving market. Critically, he says, Virgin Galactic is not a government-funded R&D operation with a set goal, it isn’t building rockets to a business plan and will not be reliant on any single customer.