US carriers are working hard to become stable, margin-accretive and low-risk industrial companies, a process made possible through consolidation, capacity discipline and experience from the harsh competitive realities of a volatile industry.

They are beginning to achieve this goal. The industry has posted positive net margins every year since 2010, reaching 6.4% in 2014 the highest since 2006, industry group Airlines for America (A4A) data shows.

IATA estimates that North American carriers will generate $15.7 billion in net profits this year, buoyed by the combination of consolidation, discipline and low oil prices.

Moody’s Investors Service has upgraded the credit ratings of American Airlines, Delta Air Lines and United Airlines, the three largest US carriers, citing improving financial metrics and balance sheets during the past month.

At the same time, US airlines have been investing in their product and operations. These investments in new aircraft, better on-board amenities like wi-fi and power outlets and improved operational reliability total about $40 billion since 2010, writes Raymond James analyst Savanthi Syth.

Yet for some reason the US Department of Justice (DOJ) is not happy with this picture.

A spokesperson for the antitrust regulator confirms that they are investigating the “possible unlawful coordination” between US carriers, declining to comment further.

The Justice department move is likely in response to a letter from Connecticut senator Richard Blumenthal in June claiming that airlines’ control of capacity and high airfares is an “anticompetitive, anti-consumer conduct and misuse of market power”. He alleges that the repeated use of the word “discipline” by airline executives’ at the IATA Annual General Meeting represents industry collusion.

“Matching supply to demand is not a novel idea and running a company for profit is not a crime,” says Syth in a report today.

She cites the fact that while industry operating margins could reach 16% in 2016, this is still far below the 35% to 40% operating margins of the freight railroads, none of whom are being investigated for possible capacity collusion.

Discipline in the airline industry generally considered supply growth – measured in available seat miles (ASMs) – that is roughly equal to or less than economic growth, which is something the industry has achieved domestically for the past five years. 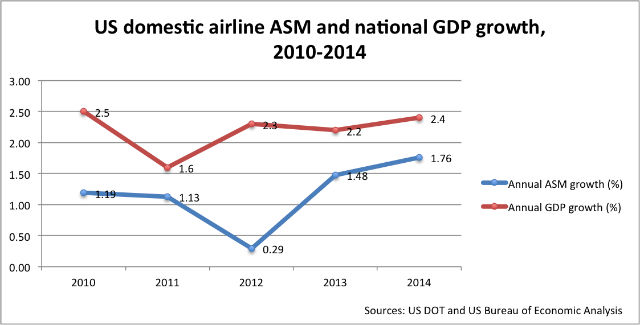 That has changed this year with capacity expected to increase between 5.5% and 6%, analysts estimates show. This is at least two percentage points higher than forecast economic growth.

“Yields have declined four out of the last six months, with market conditions worsening due to weaker-than-expected demand,” says Tom Kim, an analyst at Goldman Sachs, in a report today. There is simply “oversupply” in the market, he says, adding that airlines need to “cull capacity to bring market pricing back to equilibrium”.

American, Delta and United all forecast a drop in PRASM in the second quarter and have cut back slightly on planned capacity growth later this year as a result.

“The implication that airlines currently enjoy pricing power flies in the face of current data,” says Jamie Baker, an analyst at JP Morgan, in a report today. “Roughly 80% of fare increases we track have failed in recent years – so we can't help but find humour in the suggestion of collusion.”

Airlines are one of the most transparent industries with the number of available seats and prices made available to the travelling public – and to other airlines who can quickly match or beat fares – months to a year in advance of travel, he adds.

“Our members compete vigorously every day and the travelling public has been the beneficiary, as domestic fares are actually down thus far in 2015,” says an A4A spokeswoman. “Because there so many options among air carriers, with low cost carriers being among the fastest-growing segment, more people can afford air travel, as 222 million people are projected to fly this summer.”

One frequent question posed by the travelling public – and one that the DOJ may explore – is why airfares have not fallen with oil prices. Brent crude stood at $62.37 per gallon this afternoon, down nearly 50% from a peak of $115.19 in June 2014.

“We appreciate there may be an expectation for substantially lower airfares as a result of the large decline in oil prices, but we note that historically airlines have not fully passed on higher or lower fuel-related costs to customers,” says Rajeev Lalwani, an analyst at Morgan Stanley, in a report today.

While fuel prices are down, airlines face higher labour costs following the implementation of post-consolidation contracts, higher capital expenditures for the aforementioned product and operational improvements, and general cost inflation across their businesses.

What savings they are reaping from fuel, and this is expected to be in the billions of dollars at each mainline carrier, will be used to reduce debt and return value to shareholders – ongoing long-term initiatives.

American, Delta, Southwest and United all acknowledge receiving a civil investigative demand for all “documents and information” related to their “statements and decisions” on airline capacity from the DOJ. All of the carriers are complying with the request, they say.

“We welcome the review as the data shows that the industry remains highly competitive with more people flying than ever before,” says an American spokesperson. “Demand has been enabled by a robust and competitive marketplace in which capacity has been added and average fares have decreased.”

What happens now is unclear. The DOJ is not known for moving quickly in its investigations, meaning airlines could be under the microscope for some time to come.

Hunter Keay, an analyst at Wolfe Research, thinks this will likely reduce the “willingness of airlines to take near or even medium term remedies to stem PRASM declines” for fear of appearing like they are unlawfully colluding.

Other analysts are mixed on this conclusion, though they agree the investigation could make executives more hesitant to discuss their capacity plans publicly during the interim.

Airlines may not have much to worry about in the long run. The maximum that the DOJ has fined companies found colluding in the past was $500 million, finds Bank of America Merrill Lynch analyst Andrew Didora.

A fine of this size split four ways between American, Delta, Southwest and United would have a negligible impact on their multi-billion balance sheets.