ANALYSIS: A Chinese cat among the long-haul pigeons

China’s aviation regulator last week pledged to ease its policy of allowing only one operator on each long-haul route, a significant change that could further intensify competition among Chinese carriers and foreign rivals.

The Civil Aviation Administration of China (CAAC) explained that the changes, effective 1 October, are necessary, as China’s international air transport market enters a new growth phase, and to enhance the competitiveness of the country’s international gateways. The revised policy will also aim to build Beijing into one of the world’s largest aviation hubs, with the opening of the city’s second airport in Daxing next year.

China first implemented the “one long-haul route, one airline” policy in 2009, largely to prevent Chinese carriers from competing too aggressively on the same sectors, killing profitability.

Since the announcement of a second airport in Beijing, however, anchor operators China Southern Airlines and China Eastern Airlines have been pushing to expand their international network out of the country’s capital, thus far dominated by flag carrier Air China.

With the changes, airlines will face no restrictions flying to destinations that have at least a partial open skies agreement with China. Otherwise, those seeking to operate long-haul routes (the Americas, Europe (excluding Russia), Oceania and Africa) will need to meet some conditions before they are able to go head-on with another local operator. These include China’s market share on the route against foreign airlines, as well as consumer interest on the route, how it helps with hub development, resource allocation and service quality.

It is not clear exactly how much the changes will affect the status quo, but analysts welcome the development. They say it will give Chinese carriers greater route access and flexibility, as well as enhance competition among carriers and hubs alike.

CAAC data shows that Chinese carriers launched 658 international routes over the last three years, 151 of which are long-haul.

FlightGlobal schedules data shows that ASKs from China to North America, Europe and Australasia, have increased consistently over the last five years. Those between China and North America showed the largest incline, jumping from 31.7 billion in 2012 to 74.5 billion in 2017. 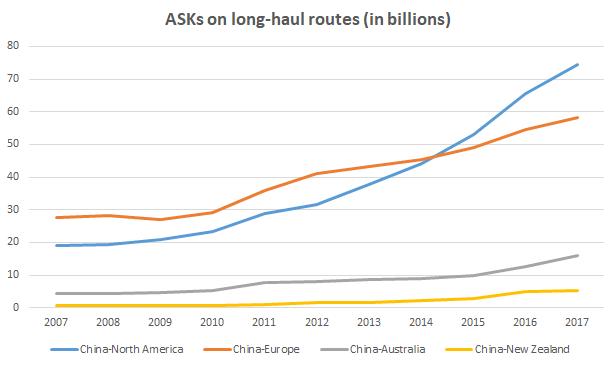 Annual reports show that the big four Chinese airlines all increased capacity on international routes last year, although this was at the expense of yields, as they sought to capitalise on the country’s growing demand for further air travel as disposable incomes rise.

Hainan Airlines was most aggressive, albeit coming from a smaller base, raising international ASKs by a whopping 65.8% last year to 32.8 billion. Of the three state-owned carriers, China Southern Airlines posted the largest hike of 14.3%, followed by China Eastern at 10.9% and Air China at 7.8%.

China Southern saw the largest yield decline on international routes at 7.5% to CNY0.37 ($0.06), followed by Air China with a 5.03% slip to CNY0.41 and China Eastern with a 0.21% decline to CNY0.47. Hainan Airlines did not provide a yield figure, but is likely to have been on a similar trajectory as its peers.

“We expect passenger yields to remain under pressure on routes to Australia/New Zealand and North America. However the year-to-year decline is expected to moderate as the Chinese carriers are no longer expanding as aggressively as they have been in the past three years,” says Corrine Png, chief executive of transport at equity research firm Crucial Perspective.

Notably, the airlines have also been launching long-haul services from secondary Chinese cities, leaving industry observers to ponder about demand and yields on these routes, which are often subsidised by the municipal governments. Examples include Xiamen Airlines’ Qingdao-Los Angeles service and Sichuan Airlines’ Shenyang-Vancouver route.

With the easing of the "one airline, one long-haul route" policy, chances are that airlines could drop some tier two routes in favour of more popular city pairings. This could result in a fare war that could exacerbate the yield decline. The challenge, however, is that many of these tier one airports are slot constrained.

With the opening of the new airport in Beijing next year, Beijing-based Air China will no doubt face more competition. Not all is lost, however, says Png. She believes that China Eastern and China Southern’s move to the new airport will also free up room for the flag carrier to expand and raise its efficiency at Beijing Capital International airport, in turn boosting its competitiveness and facilitating connecting traffic feed from its Star Alliance partners.

Joanna Lu, head of advisory Asia at Flight Ascend Consultancy, adds that with the policy change, airport hub competition, particularly at Beijing and Shanghai, will also heat up. These gateways will need to find or build on their unique advantage, which could drive improvements in service quality and overall attractiveness of the airports.

“Chinese airlines will also look to serve destinations from multiple Chinese hubs…they will become more competitive with foreign airlines, rather than have Beijing generally only served by Air China, Shanghai by China Eastern and so forth,” she adds.

On how China’s international long-haul market could eventually pan out, Png says: “China’s air travel penetration remains low and there are still plenty of opportunities for growth on international routes. As such we believe the traffic pie is big enough to accommodate several Chinese airlines. Air China and China Eastern look well-positioned.”

Follow us for more FlightGlobal news and data on WeChat: