Air New Zealand and Virgin Australia’s separation will be completed in October when their seven-year long trans-Tasman joint venture is terminated.

The Australian carrier says it has “received notice that Air New Zealand intends to end the strategic alliance” – suggesting that it was not a mutual decision.

The news is hardly a surprise, however: Air NZ has effectively washed its hands of Virgin since announcing in 2016 that it would sell its 19.9% stake in the carrier.

At that time, there were suggestions in the Australian media that Air NZ boss Christopher Luxon had grown tired of Virgin’s continued losses and its chief John Borghetti’s "game change" strategy. In two transactions that closed last year, it exited Virgin’s share register by selling its stake to China’s Nanshan Group.

Although it maintained that there were still strong ties between the carriers, the Kiwi airline appears to believe that it will gain more from going it alone on the Tasman market. In a statement, Air NZ chief revenue officer Cam Wallace says the move “will enable us to deliver a more consistent customer experience using our own fleet”.

Not that Air NZ will need much help in maintaining its dominant position across the Tasman. FlightGlobal schedules show that the Star Alliance carrier controls more than one-third of capacity on the market, and operates the greatest number of city-pairs. 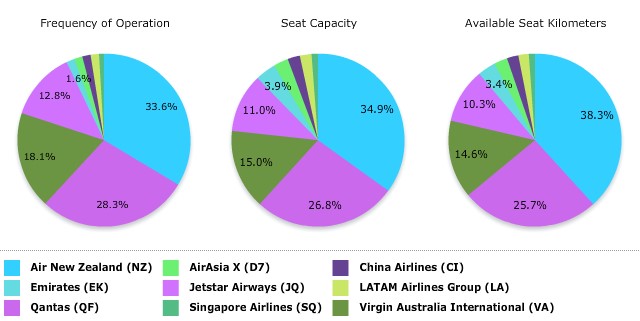 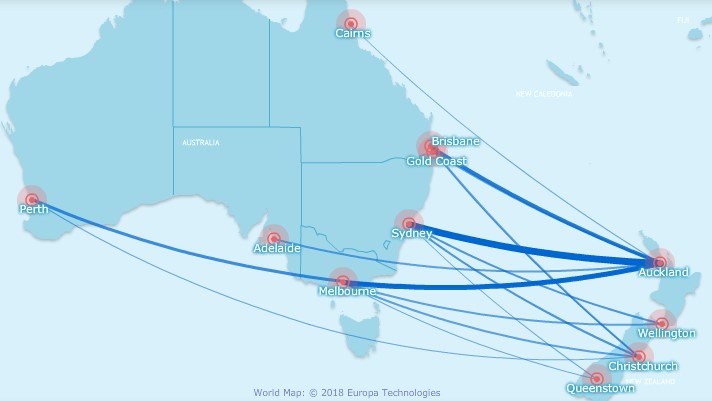 By comparison, Virgin sits a distant third in the market, and has concentrated its network, with a few thinner routes 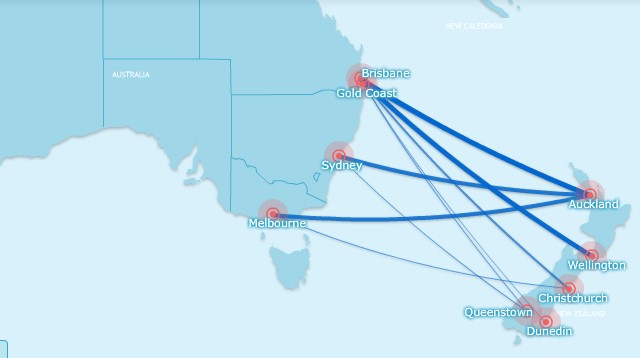 Air NZ already had big plans for the Tasman market. The carrier will operate its first A320neos on Tasman routes once they start entering the fleet in July, which will be followed in September by its 214-seat A321neos. Its growing Boeing 787-9 fleet will also put in more appearances in Australia, following the success of the upgrade of its Auckland-Adelaide services to the widebody.

The divorce of Virgin and Air NZ comes amid strong growth in the market, buoyed by strong inbound tourism to New Zealand. Commenting in an analyst call following its half-year results in February, Luxon noted that there had been a “significant turnaround” in the market with “revenue improvement outpacing the increase in capacity” during the six months to 31 December.

That improvement was driven primarily by Emirates’ decision to end most of its flights between Australia and New Zealand in October, which were operated by Airbus A380s. Although some of that capacity was back-filled by its alliance partner Qantas, Air NZ appears to have maintained a strong market share, particularly on the key Sydney, Brisbane and Melbourne to Auckland routes.

NEWLY SINGLE, BUT NOT READY TO MINGLE

Air NZ has wasted little time in announcing capacity to replace that lost from the seat inventory it previously held through the Virgin codeshare.

Even before the changes announced on 9 April, Air NZ had continued to grow capacity over the northern summer season – and particularly during the peak southern summer season. The latest available FlightGlobal schedules data – which excludes the newly announced capacity rises – shows that it had already programmed in capacity increases of more than 20% during January, February and March 2019.

Altogether, the increase in capacity paints a picture of a carrier that is seeking to cement its place as the market leader.

At the time of writing, Virgin had yet to outline its own plans beyond October, but they are likely to be more muted as the carrier continues focusing on generating cash and profit, rather than engaging in a capacity battle as it pursues market share.

FlightGlobal incorporating Diio data suggests that Virgin’s strongest revenue performing trans-Tasman route in January 2018 – the latest data available – was Brisbane-Wellington, on which it has a monopoly until Air New Zealand starts its services. Its strongest fares, however, are on its Sydney and Melbourne to Queenstown services.

The same data also shows that Air NZ’s services from Sydney, Melbourne and Brisbane to Auckland delivered stronger revenues than Virgin’s Brisbane-Wellington flights. While that can be attributed to the larger amount of capacity the Star Alliance carrier operates on the three routes, it also demonstrates how far Virgin is behind its previous alliance partner.

EYE OF THE TIGERAIR?

Borghetti, however, has pointed to a new play in the market: bringing its discount carrier, Tigerair Australia, into the market.

Less than a month ago, Borghetti’s second in charge, group executive Rob Sharp, told attendees at the Routes Asia event that while a return to international flying was on the cards, the carrier was more focused on its fleet changeover from Airbus A230s to Boeing 737-800s. Flight Fleets Analyzer shows that the carrier has three 737s in its fleet, compared with 14 A320s.

Nonetheless, as Qantas has done with Jetstar, Tigerair Australia could appeal to the independent and budget traveller market. Taking over some of Virgin’s thinner routes, such as Brisbane-Dunedin and Melbourne-Christchurch, would probably be its priority, while it could also test the waters in other markets, such as Palmerston North or Hamilton.

Virgin is also likely to court additional codeshare partners to bolster trans-Tasman traffic on its main brand. The HNA Group is a likely target, and could build on Hong Kong Airlines’ codeshare on Virgin’s Sydney-Auckland and Melbourne-Auckland routes. Any other carriers without an existing relationship with Qantas and Air NZ are likely to be fair game.

Whatever happens, it is certain that further changes to the dynamics of the Tasman market are set to come.