Airbus intends to later this month start flight-testing an A340 that has been fitted with experimental laminar-flow wing sections under a partially EU-funded technology project with other industrial partners and research institutes.

The objective of the effort, dubbed Breakthrough Laminar Aircraft Demonstrator in Europe (BLADE), is to assess the industrial feasibility of natural laminar-flow wings – as opposed to hybrid laminar flow, which is artificially induced through hardware in the wings – on future aircraft. The theory and potential benefits of achieving a laminar rather than turbulent airflow in the boundary layer around the wings have been known for 20 years, said Axel Flaig, senior vice-president research and technology for Airbus's commercial aircraft division, on 30 August in Tarbes, where the A340 has been modified.

But Flaig notes that the technology has so far not been practically applied, because it has not been possible to produce on an industrial scale wings that are, firstly, smooth enough to achieve a laminar airflow and, secondly, aerodynamically robust enough to sustain the desired effect in daily airline operations.

Gaps and steps – especially around conventional, retractable slats along a wing's leading edge – fasteners, surface deformations and contamination through dirt, de-icing fluid and rain droplets can disturb the laminar air flow. "To make this happen you need very low [design and manufacturing] tolerances," says Flaig. "And you need to make this wing robust against contamination... because this laminar boundary is very sensitive to small disturbances."

On the A340-300 – MSN 001, the first A340 to fly in October 1991 – Airbus replaced the entire wing section outside the outboard engines with a laminar-flow section that has a different geometry and, crucially, a shallower sweep, giving the aircraft a distinctive kinked-wing planform. The wingtips have been fitted with pods containing sensors, including video cameras. And the attachment structure to the A340's existing wing has also been covered by fairings to accommodate further sensors and separate the air over the laminar-flow section from that across the conventional wing.

The new wing section contains no fuel system, but is otherwise fully functional and includes the aircraft's two ailerons on each side. The interior structure is metallic, while the upper wing surface – where laminar flow is to be achieved – is made from carbonfibre-reinforced plastic. 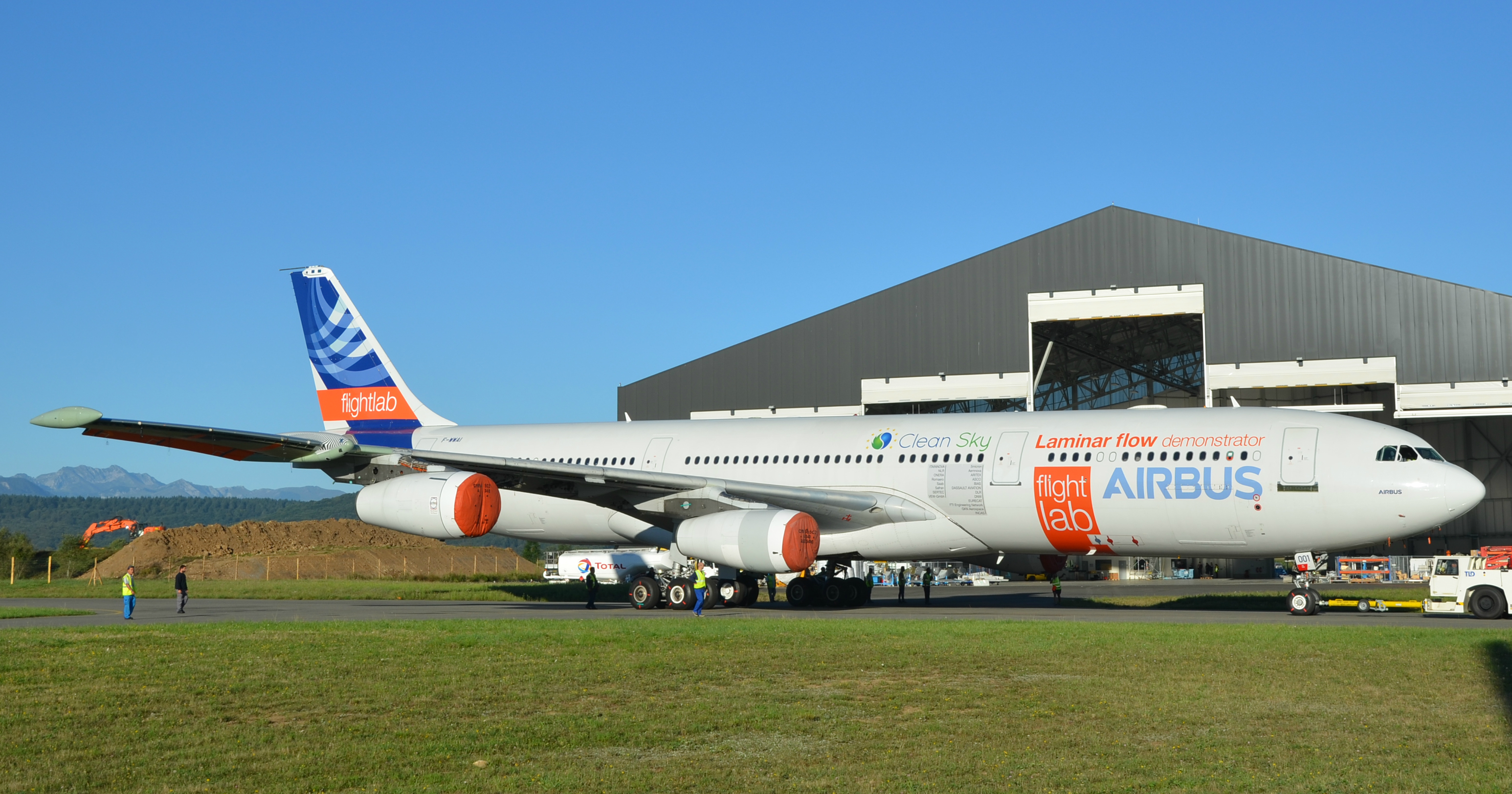 Different construction techniques were employed for the leading edge and upper wing skin to assess feasibility of different manufacturing approaches. On the port wing, the leading edge is integrated with the upper wing surface in a single D-nose carbonfibre panel – provided by Swedish programme partner Saab – which is equipped with internal attachment points to avoid any external fasteners from the leading edge to just forward of the ailerons.

On the starboard side, a metallic leading edge is joined with a carbonfibre upper wing surface supplied by UK composites specialist GKN. Flaig describes the port side as a more "elegant" solution, but expresses hope that the starboard side will fulfil aerodynamic requirements as the more conventional construction is less demanding and costly to manufacture.

The laminar-wing sections are not equipped with slats, and the slats on the remaining conventional wing have been deactivated. This will reduce the A340's capability to operate at high pitch-up angles, and speeds for take-off and landing will be higher than usual, acknowledges Flaig. But he says this will pose no problem as the aircraft, which has a maximum take-off weight of 275t, will not weigh more than 150t for test flights.

Part of the effort will be to assess a Kruger flap for the laminar-flow wing – to provide both high lift for take-off and landing, and leading-edge shielding. The team will install a fixed Kruger flap approximately 2m (6ft 6in) in length on a section of the laminar wing, and remove the device for high-speed tests. Additionally, coatings are being evaluated to reduce wing contamination, especially by insects.

Airbus insists "there is no link to any possible future aircraft programme". However, the natural laminar-flow tests are clearly aimed at maturing technology for a potential next-generation narrowbody. While the A340's wing has a sweep of approximately 30°, which is linked to achieving a cruise speed of Mach 0.82-0.84 for long-haul flights, the laminar wing has a sweep of around 20°. Airbus says the test aerofoil is optimised for cruising at Mach 0.75.

"Natural laminar-flow at a 30° sweep angle is impossible because of the instability of the flow," Airbus's flight-lab project leader Thierry Fol tells FlightGlobal. "You have to make a decision: either you would like to have natural laminar flow so you have to slow down in order to have a less important sweep angle... or you keep the 30° [sweep] in order to fly at Mach 0.85, but have something to stabilise the turbulent flow."

Fol says high-speed flight would require a hybrid laminar-flow system that produces a suction effect around perforated wing surface areas. The required low pressure could either be produced by redirecting air inside the aerofoils (passive system) or through an active pump system.

Flaig acknowledges that a speed reduction to Mach 0.75 would not be acceptable for long-haul and that aircraft designers would have to adopt a hybrid laminar-flow system. But he argues that speed could be compromised on short- to medium-haul routes as A320-family aircraft typically cruise at Mach 0.78. "We think it doesn't make a big difference," he says. 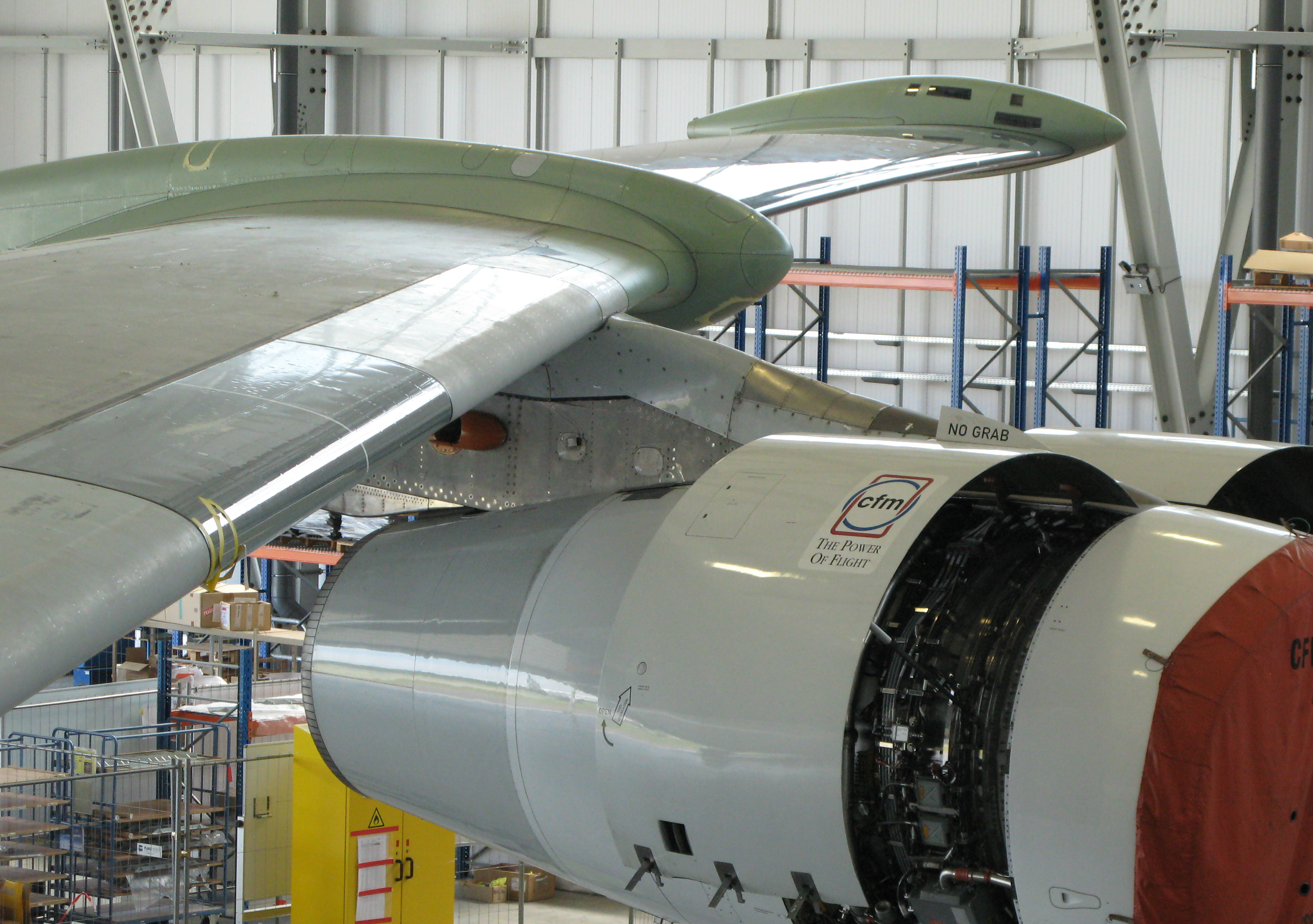 While the boundary airflow on conventional wings tends to become turbulent just aft of the leading edge, the BLADE's objective is to achieve laminar flow along 50% of chord length. Wing friction drag could thus be halved, says Flaig. Based on an 800nm (1,480km) sector, this could translate to an overall aircraft drag reduction by 8% and fuel burn savings of up to 5%, he says.

A central aspect of the research is to find a sweet spot between potential savings and a sufficiently robust laminar flow that can be sustained in daily operations. As natural wing flexing can break up the laminar flow, the team wants to determine how much movement can be tolerated before the flow becomes turbulent.

In order to measure the wing's flexibility, the fairing around the old and new wing joint has been finished with a stripe pattern. A set of eight video cameras in each of the two wing-tip pods is monitoring the pattern and its reflection on the laminar wing's surface to determine the aerofoils' movement. This is being combined with data from interior sensors on the wing spar to assess the structure's movement.

Meanwhile, infrared cameras on top of the vertical tail fin are monitoring the laminar flow over the wing. BLADE project leader Daniel Kierbel explains that the laminar flow area can be visualised as the flow cools the wing's surface – which is being warmed by sunlight – at a slower rate than turbulent air. He adds that flight tests will need to be interrupted in October as the sun will be at too low an angle during winter to sufficiently warm the wing. 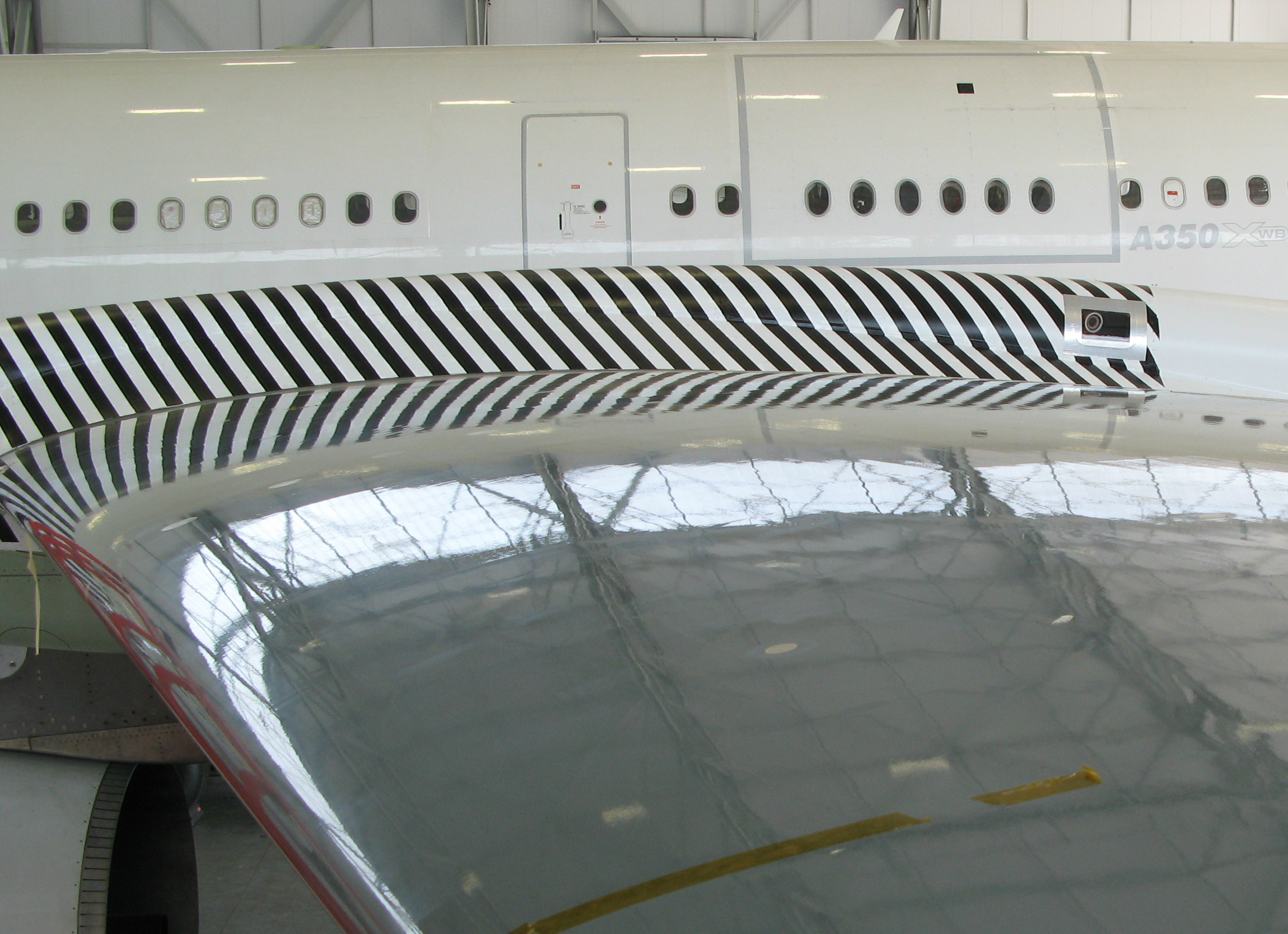 The BLADE A340 will be based in Toulouse, and no missions are planned outside the region. The team intends to complete a total of around 150 flight hours this year and in 2018. Flight-test engineer Philippe Seve says the A340 will be "a bizarre aircraft to fly" as its original wing is a 1980s design, while the outer, approximately 9m section has a more radical, new design. The flight-test programme – a first sortie is targeted for second half of September – will concentrate on aircraft handling, and then move on to laminar flow evaluations.

At a later stage, Seve says the team wants to "alter the wing" in order to assess the laminar flow's robustness. There is no intention to damage the wing. But tests will include application of stickers to simulate gaps, steps and surface deformations around rivets. On one side, Airbus has installed a speaker system to gauge potential effects of engine noise on the laminar flow.

Seve says the A340 provides an optimal testbed as its legacy wing provides stability and safety if lift were to be compromised on the laminar section. "We will be able to do whatever we want," he says. "It's better to have a test wing that doesn't alter the full physics of the wing".

During the early planning phase – the BLADE project was launched in 2008 as part of the Smart Fixed-Wing Aircraft initiative under Europe's CleanSky research effort – there were evaluations to use a smaller aircraft, reveals Flaig. He says this approach would have necessitated building a complete new wing and would have been "very expensive". Airbus's initial A340 flight-test aircraft lent itself because "it was available" – the need to use the aircraft for routine technical assessments has declined as the active A340 fleet is shrinking – and the four-engined type's wing configuration provided a "natural junction" to attach a full-scale laminar wing section. Meanwhile, the rest of the wing – including attachments for the engines and landing gear, fuel system, trailing-edge flaps – can remain unchanged.

"This is a significantly less technical effort, but will demonstrate the same and be much more safe, because... if something happens on the aerodynamic side, the rest of the wings will still be carrying the aircraft," says Flaig.

He says the BLADE project represents the largest part of Airbus's estimated €330 million ($392 million) contribution to the EU's current Clean Sky II initiative – a 10-year programme until 2024 that includes other projects to mature technology for more efficient aero engines, helicopters and onboard systems. Some 20 other contributors are involved in the BLADE scheme, including Dassault, Romania's Romaero – whose responsibility included production of the wing-tip pods – and Spanish aerostructures specialist Aernnova, which assembled the two laminar wing sections.

Clean Sky II's estimated total gross budget is €4.2 billion, half of which is funded by the EU. Flaig concedes that Airbus on its own would not be able to pursue an undertaking such as BLADE.