Six US and Mexican airlines have applied for the dozens of slots at Mexico City and New York John F Kennedy airports that will be divested by Delta Air Lines and Aeromexico in the coming months.

Southwest Airlines, JetBlue Airways, Alaska Airlines, Volaris, Interjet and VivaAerobus filed applications with the US Department of Transportation (DOT) seeking the slots to begin dozens of routes ahead of the 23 January deadline.

While most of the applications involve the launch of new service, a handful of carriers are also hoping to add frequencies on existing routes or adjust unfavourable timings of slots that they already hold.

Delta and Aeromexico are divesting 24 slot pairs at Mexico City and four at New York JFK, in exchange for DOT approval of anti-trust immunity for their joint venture.

In the second phase, 10 Mexico City slot pairs and two at JFK will be assigned. However, the DOT had earlier said that interested airlines must first demonstrate that they had "exhausted reasonable efforts" to acquire the slots through the airports' regular allocation process.

Airlines are requesting for a total of 13 Mexico City slot pairs and three at JFK for the second phase. 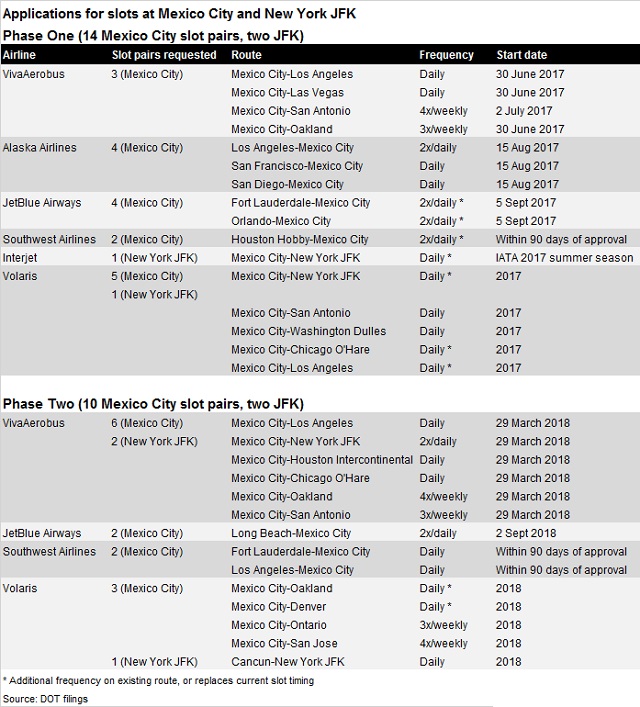 Mexican low-cost players VivaAerobus and Volaris are eyeing new transborder service if awarded slots at Mexico City in phase one of the slots proceeding.

Monterrey-based VivaAerobus, which until now has the smallest footprint in the US compared with its peers, wants to begin flights from Mexico City to Los Angeles, Las Vegas, San Antonio and Oakland.

The airline operates to only Houston Intercontinental, and Las Vegas from Monterrey on a seasonal basis, today. Its chief executive Juan Carlos Zuazua told FlightGlobal last month that the airline sees opportunity in the slots divestiture.

"With the Delta-Aeromexico JV having to release several slots at Mexico City, LCCs will benefit," he said, adding that VivaAerobus could launch service on up to five US routes in 2017.

"Despite the fact that this route connects two extremely important national capitals, the Washington Dulles International Airport (IAD) - Mexico City market is largely under-served, receiving service on a nonstop basis by only United and Aeromexico," says Volaris in a DOT filing.

Volaris also requested slots for a second daily flight from Mexico City to both New York JFK and Chicago O'Hare, and for a third daily flight to Los Angeles.

Among US carriers, Alaska is planning for a return to Mexico City, which it had previously served from Los Angeles from 2005 through 2015. Seattle-based Alaska subsequently transferred that route authority to American Airlines.

Alaska is planning to resume the Los Angeles service, as well as launch new flights from San Francisco and San Diego to Mexico City, if awarded slots. Calling Mexico City a "critical gap" in its network, the airline says its recent acquisition of Virgin America has given it a broader California network and a stronger platform to serve Mexico.

Not all of the proposed routes are new for the airlines that have applied for them. JetBlue, Southwest and Interjet are taking advantage of the slot proceeding to shift their current slots to peak hours of the day at either Mexico City or New York JFK, or to add frequencies on existing routes.

JetBlue is planning ahead for likely international service at Long Beach in California, and is requesting for two daily slots pairs at Mexico City for service it tentatively hopes to launch on 2 September 2018 with Airbus A320s.

New York-based JetBlue has long lobbied for Long Beach airport to be opened up to international service, and the city council is slated to vote today on the matter.

"Although five US and Mexican airlines currently serve MEX-LAX, no airline operates non-stop service to MEX from any of the other airports in the large Los Angeles metropolitan area. JetBlue’s MEX-LGB flights would introduce low-fare competition, benefit customers in both markets, and further the links between Los Angeles and Mexico City," says JetBlue in its DOT filing.

Dallas-based Southwest, which also already serves Mexico City, is keen to launch service from Fort Lauderdale and Los Angeles in 2018 if awarded slots in the second phase of the slot proceeding.

"Southwest’s new flights will provide needed US LCC competition to Delta/Aeromexico and other legacy carriers that currently dominate these important transborder markets," it says.

Southwest began service to Mexico from Los Angeles in December 2016, and serves Cancun, Los Cabos and Puerto Vallarta. The airline currently flies to a handful of Caribbean destinations from Fort Lauderdale, but expects further international growth from the Florida airport as it gets closer to opening a new international concourse in June.

It has already announced that Cancun flights from Fort Lauderdale will begin on 4 June, marking the airline's first Mexican flight from the airport.