Helicopter maker Bell left no doubt at Heli-Expo that it aims to lead the aerospace industry in developing autonomous urban air taxis.

A mock-up of the in-development Nexus air taxi sat centre stage on Bell's booth at the HAI event, highlighting the manufacturer's interest in a product wholly different from its helicopters.

"Our industry is changing like never since the jet age," Bell vice-president of innovation Scott Drennan told reporters while sitting in the Nexus mock-up.

"It's becoming a 'when' question, not an 'if' question," Drennan says of the urban air taxi concept, calling Nexus the "crown jewel of on-demand mobility".

Bell unveiled Nexus in January at the Consumer Electrics show in Las Vegas, where the project's tech-heavy requirements were highlighted. Now, the manufacturer has showcased Nexus at an aerospace event.

Nexus is Bell's response to an explosion of interest in urban air mobility – the concept that small air taxis with electric systems and autonomous technology will one day provide on-demand intra-city transport at affordable prices.

Bell's design has six tilting, ducted fans powered by a hybrid-electric system consisting of a Safran gas-turbine engine, a generator, electric motors and a battery system, Bell says. That set-up will give the aircraft about 1h of flight duration before refuelling is required, says Drennan.

The ducted fans will provide lift during hover, forward propulsion and lift during forward flight, says Drennan. That forward lift will not come from the fans being tilted slightly down, but from the ducts, which act as aerofoils – "circular" wings, engineers call them.

A vehicle-management computer will act as Nexus's brain, collecting flight data and communicating with a flight-control computer that will direct the aircraft's flight, Drennan says.

Bell expects Nexus will have gross weight of 6,000-7,000lb (2,720-3,170kg), payload of 800-1,000lb and, initially, capacity for one pilot and four passengers. It could eventually become fully autonomous, at which point another passenger would replace the pilot.

Because Bell envisions Nexus as providing reliable air taxi service, the aircraft must be capable of operating in adverse weather, even, possibly, in icing. "We have to address flying in all weather conditions," Drennan says.

Bell's exhibit drew crowds to its Heli-Expo booth, where attendees queued for the opportunity to sit in the mock-up, which has five leather seats similar to those found in high-end automobiles and arranged with a pilot's seat in the centre of the cockpit and two seat-pairs behind. 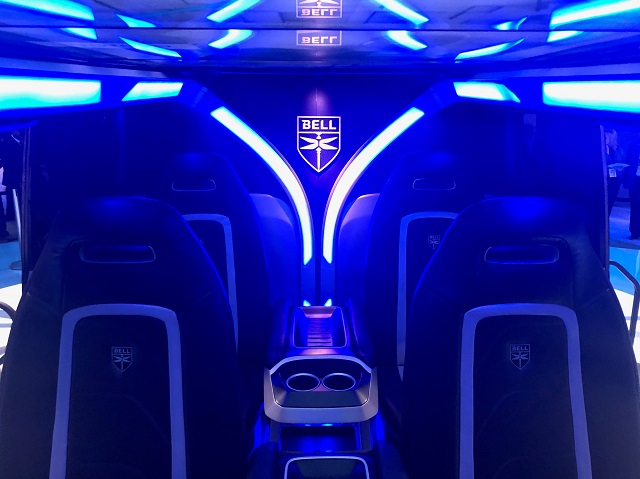 The cabin of Bell's Nexus mock-up at HAI Heli-Expo

The aircraft will have Garmin cockpit displays, and though Bell has not said how Nexus will be controlled, it will not have traditional helicopter controls like a cyclic, collective or pedals, Drennan says.

If all goes to plan – an outcome anything but certain – Bell expects Nexus to receive regulatory certification in the mid-2020s.

Bell has not said when the first full-scale prototype might fly or disclosed potential purchase prices.

"There's a process burden for having the world standard in aviation," he says. Bell "might be able to find a path that could be shorter".