When US Secretary of the Air Force Heather Wilson's aircraft was grounded because of smoke in the cockpit, causing her to miss the delivery ceremony for the first Boeing KC-46A Pegasus tanker, the snag seemed to be par for the course for the programme.

The US Air Force's KC-X aerial refuelling tanker replacement effort has been marred for years by ethics scandals, billions of dollars in cost overruns and delays. And despite the celebrations at Boeing's assembly line in Everett, Washington – and Wilson’s eventual arrival and then departure the next day on one of two KC-46As bound for McConnell AFB in Kansas – the tanker's trials and tribulations are not completely over. 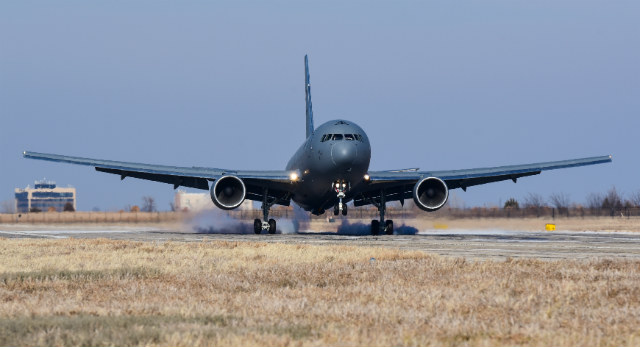 The USAF has agreed to accept its first Pegasus aircraft despite problems with the type's remote vision system; a combination of stereoscopic and infrared cameras that provide a 185° field of view behind the tanker and help an onboard operator steer the refuelling boom into contact with a receiver aircraft.

Under the service's original development contract, Boeing was supposed to deliver 18 operational aircraft, nine wing aerial refuelling pod sets and two spare Pratt & Whitney PW4062 engines by August 2017, but that milestone is now unlikely to be reached until 2020.

The lingering sunlight glare issue on the remote vision system occurs when the tanker is flying directly away from the sun and impacts the system only about 3% of the time, says Boeing. The company will fix that problem at its own expense, with the USAF also withholding some funds until a resolution is in place.

"Our engineers and scientists at the Air Force Research Lab at Wright-Patterson [AFB] agree on what the actual visual parameters will be for the revised system, and Boeing has agreed to go ahead and make those changes," Wilson says. "The system is safe and usable as it is. We just have a few operating workarounds. The best example is you can't refuel directly going away from the sun."

Two other remaining snags involve a detachment problem with the aircraft's boom and an issue with its Cobham-made aerial refuelling pods.

For its part, Wilson says the USAF will pay for the first programme change to the KC-46A, in order to redesign part of the boom.

"The boom meets the international standard that the air force gave to Boeing. But there are a few of our aircraft, particularly the [Fairchild Republic] A-10, that are a very light aircraft, and the boom doesn't disconnect quite as well," she says. "It’s a fairly simple fix. It's an actuator fix just to make the boom a little more sensitive for some of our light aircraft."

The refuelling pods are being held up mostly due to issues with the US Federal Aviation Administration (FAA) certification process and are expected to be delivered in 2020, says Boeing. At the USAF's request, the KC-46A is the first military aircraft to be fully certificated by the US civil regulator.

“That was one thing we underestimated: the amount of time it would take to get this airplane through full FAA certification, full military certification,” says Mike Hafer, global sales and marketing manager for the KC-46A. "No other warfighting airplane has ever been certified by the FAA. Every part and every piece had to go back to the sub-tier suppliers and be certified on how it was manufactured, where those parts are coming from."

Remaining hold-ups aside, the service says it plans to begin operational test and evaluation of the aircraft at McConnell AFB immediately.

Boeing is eager to make up for lost time. After handing over the first pair of tankers, the company believes it will be able to deliver four or more per month in early 2019. At some undetermined point, it expects to settle down to a delivery pace of three aircraft per month.

"For the first few months we believe we will deliver a pretty good number of jets," says Mike Gibbons, Boeing's KC-46A tanker vice-president and programme manager. "We don't have the number nailed down yet," he adds.

The manufacturer has 12 aircraft complete and awaiting acceptance by the USAF. It has so far been contracted to produce 52 of an expected 179 tankers for the service. The next four examples will also go to McConnell AFB, with a second set of four then bound for Altus AFB in Oklahoma. 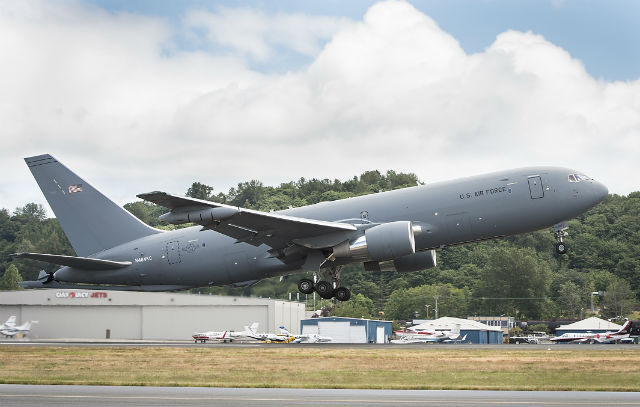 As eager as Boeing is to deliver, the USAF is equally keen to accept. The United States Transportation Command said in June 2018 that it had 20,000-30,000h per year that are not being supported by an aerial refuelling service. And the USAF unveiled a plan last September to add 14 more air tanker squadrons to its inventory.

Boeing has been in the air tanker business for nearly 70 years, since the introduction of the KC-97 Stratofreighter, but says the KC-46A is not just another "flying gas station".

The KC-46A is based on the 767-2C freighter and is built at Everett alongside commercial jets. The aircraft can offload fuel at more than 1,200USgal (4,550 litres) per minute through its boom, or at one-third of this rate via its hose and drogue-equipped wing pods.

Notwithstanding its commercial pedigree, the tanker includes a number of defensive features that the USAF hopes will make it much harder to shoot down while operating on the edge of air battles.

"This aircraft is designed to operate in a medium-threat environment: not going into a high missile engagement zone," says Hafer. "This is going to get up very, very close to the weapons area, but not operate deep; it's not penetrating on day one of the fight."

To avoid incoming missiles, the tanker is equipped with infrared countermeasures and a radar warning system. Two of the aircraft's four radar warning receiver antennae are positioned on its wing-tips – a configuration which required Boeing to remove the 767-2C’s winglets because they were causing interference.

“It’s more important to protect this aircraft [with radar warning antennae] than to get the 0.03% fuel efficiency [benefit],” says Hafer.

The KC-46A's cockpit is also armoured and able to take hits from 7.62cal rounds. Its electronics are also hardened against an electromagnetic pulse emanating from a nuclear blast. Moreover, as a support aircraft for nuclear launch missions, the Pegasus is able to take off after a cold start within less than 10min, says Boeing.

To move more stealthily, the tanker is also able to operate blacked out using night-vision equipment, which Boeing says makes it invisible to the naked eye beyond 500ft and is an advantage when landing overseas on covert missions.

"This airplane can start, taxi, take off, fly an air refuelling mission, land, turn, get serviced and get back in the air, and never turn on a single photon of ambient light," says Hafer.

Perhaps one of the features Boeing is most proud of is the tanker's forthcoming FAA certification, which, the company says, makes it much easier to support.

"93.5% of this airplane is 767 – FAA certified. [It has] easy maintainability, common spare parts over the 1,100 767s that are out there," says Hafer, noting that the USAF can lean on Boeing’s global maintenance, repair and overhaul network. "It gives the air force an amazing repair capability. No longer do they have to fly a spare part from some base in the United States."