The audience at Airbus’s annual press conference this year may have been a little surprised to hear the company’s senior executives singing the praises of the best-selling widebody produced by their arch-rival, the Boeing 777-300ER.

Airbus chief salesman John Leahy described Boeing’s big twin, which has secured over 800 orders, as “a fantastic airplane”. For regular attendees, this sort of plaudit for the -300ER was nothing new. Airbus commercial aircraft president Fabrice Bregier has previously described the 777-300ER’s market positioning as being “in the sweet spot”. 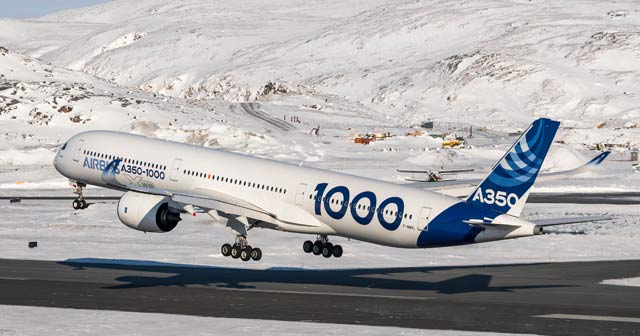 The A350-1000 is the biggest twinjet yet produced by Airbus

The fact is that the -300ER has been making life very difficult for Airbus salesmen for more than a decade in the 300-350-seat segment, effectively banishing Toulouse’s challenger – the four-engined A340-600 – to early obsolescence. But with Boeing now upsizing its big-twin offering around the larger 777X family, and the -300ER into its sunset years, Leahy and his team are positively salivating at the opportunity this presents for Airbus’s new big twin, the A350-1000.

The Rolls-Royce Trent XWB-powered twinjet is 7m (23ft) longer than the baseline A350-900, offering around 40 more seats in a typical arrangement accommodating 366 passengers. Flight testing began in November last year, and the first aircraft is due to enter service with Qatar Airways in the second half of this year. Sales have been less than spectacular so far, with total -1000 orders accounting for just a quarter of the A350’s total orderbook of 821 and net sales averaging just 20 aircraft a year since launch in 2006.

But Airbus is convinced its time is about to come.

“The 777-300ER was a fantastic airplane,” Leahy said at that January press conference. “It fit a beautiful niche in the market and we have the same range, we have the same seat count and we burn about 25% less fuel doing it.

“We can see why they wanted to move out of that market, but the market is still there. We’re going to sell a lot of A350-1000s going forward.” 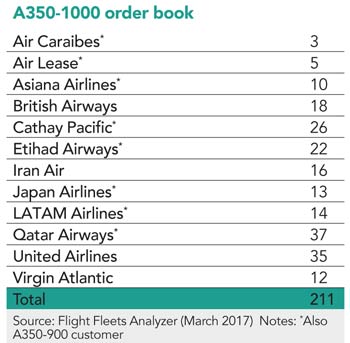 The -300ER’s spiritual successor in the Boeing product line-up is the 400-seat -9, which is due to come on stream in 2020 as production of its predecessor winds up. With that move, Boeing will have effectively vacated the 300-350-seat sector (the smaller 777X variant, the -8, is similar in size to the -300ER but is scoped for ultra-long-range missions).

Like the -300ER, the 777X family is offered exclusively with GE engines, while all flavours of A350 come with Rolls-Royce power. So the battle of the big twins is playing out both at the airframe and powerplant level.

The decision to add a stretch to the GE9X-powered 777-9X is attributed by Airbus to the need for competitive economics, with Bregier saying the Boeing twin had to be “slightly bigger because it could not compete against the A350-1000”.

There’s no doubting that Boeing has already enjoyed success with the 777X family, having secured almost 320 orders from eight customers. This includes the recent commitment for 20 777X orders from Singapore Airlines after a battle with the -1000. Since its launch at the Dubai air show in 2013, the 777X has got off to a great start with sales, leaping ahead of the A350-1000 – although a single customer, Emirates, accounts for 150 of those orders.

So Airbus is clear in its intent to “own the space” previously dominated by the -300ER. But can it really achieve its ambition?

“The A350-1000 has killed the 777-300ER. That’s why Boeing needed to respond with the 777X,” says Richard Evans, senior consultant at Flight Ascend Consultancy.

He believes the A350-1000 can “own that space” but points out that with more than 800 -300ERs ordered to date, many will he expects remain with their current operators for a long time to come.

Richard Aboulafia, vice-president of analysis at Teal Group, describes the long-range twin-aisle market as “somewhat fungible. That is, customers are seldom wedded to a specific size; seat-mile costs and range are every bit as important. 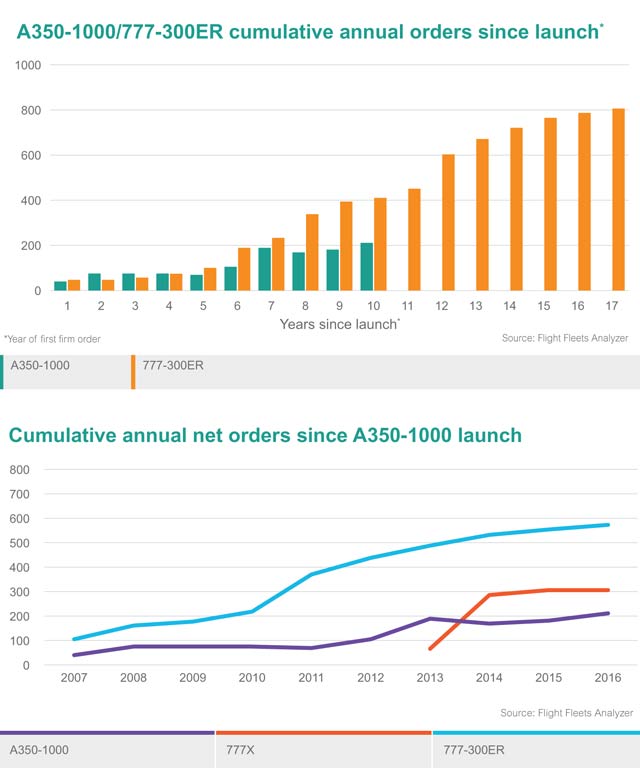 Evans says there remains a significant market for 300-400-seaters, especially with more dense economy layouts. “The 777-9, in 10-abreast economy, will be too large for many airlines,” he says. “I expect several A350-900 customers to order the -1000 too, or to upgauge some of their backlog.”

“I still expect many A350-900 customers to also take the -1000, as it has almost the same range and better economics, but it needs some new customers,” says Evans. “I think we are in that phase of waiting to see the aircraft in service.”

Airbus decided in 2011 to effectively relaunch the A350-1000 with more range and higher weights around a more powerful Trent XWB-97 variant to widen its appeal. But the move cost it Emirates as a customer for the entire A350 family. The Dubai carrier was unhappy with both the changes that Airbus introduced, and the way it went about the revamp, and terminated its contract for 70 aircraft, comprising 50 A350-900s and 20 A350-1000s. Until that point, it had been evaluating whether to convert its entire A350 order to the larger variant. 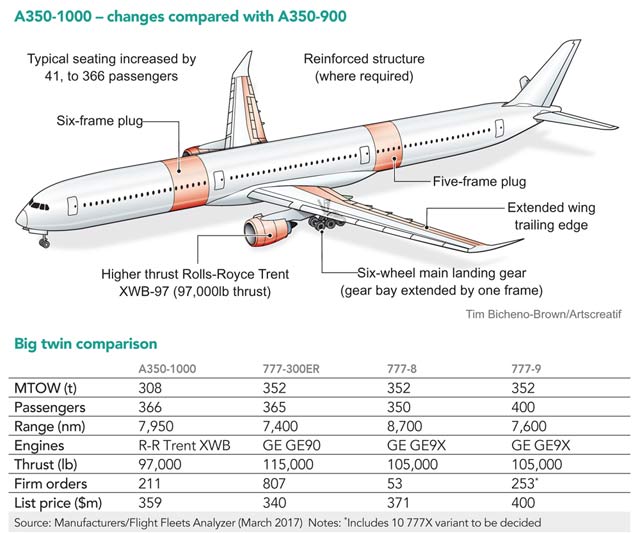 While Emirates could eventually come back to the programme – it has long been evaluating the A350 and the 787-10 with a view to placing an order – the redesign was aimed at boosting the -1000’s appeal to the likes of Cathay Pacific, Singapore Airlines and United Airlines for transpacific operations.

This has had moderate success so far, with Cathay and United ordering the -1000, but Singapore recently opting to go down the Boeing route with commitments for an order for 20 777-9s. Cathay has ordered both aircraft and will use the A350-1000s as replacements for its 777-200/300 and the 777-9 for long-haul operations, and it is not entirely impossible that SIA could do the same.

Some doubt recently emerged over the United order, with the airline indicating it had reversed its decision to use the A350-1000 to replace its 747-400s, and turned to last-off-the-line 777-300ERs instead.

Meanwhile, what are Boeing’s options for the market it once dominated, if the A350-1000 does indeed turn out to be the success Airbus is forecasting?

Evans sees the largest of the Boeing Dreamliner variants, the 330-seat 787-10, providing strong competition for Airbus in the A350-1000’s sector on medium-haul routes where range is less critical. 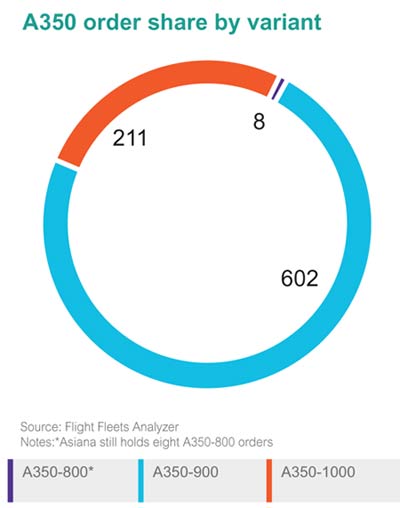 Aboulafia thinks it could be a challenge for Boeing to use the 777-8 to recapture the -300ER segment. “While it will have many appealing features – best-in-class engines, belly cargo, etcetera – the 777X is scaled for the larger -9 class, and the smaller -8 version might be disadvantaged by extra structural weight compared with the A350-1000,” he says. “Of course, we’ll only know when the two types are in service and fuel-burn data will be available. Until then, it’s an interesting horse race to watch.”

Despite its stated confidence in the A350-1000, Airbus has been openly hinting that it could take the fight to the 777-9 with a new derivative. Leahy has talked of a 400-seat “A350-2000” but remains convinced that the bulk of demand will sit with today’s variant, which is “clearly the sweet spot in the market. Even if we were to do the -2000, the majority of the sales are going to be for the -1000.”

But just how easy would it be for Airbus to develop a double-stretch if it needs to take the fight to the 777-9? Evans thinks Airbus will find it difficult to respond, not least because a stretched A350 would need a new engine. There is also the question of the ultimate destiny of the A380 programme, which is currently next in line to the A350-1000 in the product line but sitting some 200 seats above it.

“Longer term, is there a need for a [new] two-member family larger than the A350, when the A380 ceases production?” he asks.

Aboulafia says Airbus would undoubtedly need to react if the 350-seat market indeed migrated up towards the 777-9. “Their decision on a stretch or a clean-sheet response will depend in part on Rolls-Royce, and what they can or will do,” he says.

Although the sun is starting to set on the successful 777-300ER, the aircraft will clearly remain a key part of airlines’ long-range fleets for some years to come. Boeing has delivered just over 700 -300ERs, and has a further 100 or so on backlog. By the time the -300ER programme winds up in three or four years’ time, total production should have run to about 860 aircraft since the first in 2004, Flight Ascend Consultancy estimates.

Boeing secured 19 net orders for the -300ER in 2016 compared with 30 for the A350-1000. Aboulafia expects sales to continue to slow as last-off-the-line -300ER slots are allocated. “I’m not expecting more than a handful of additional 777-300ER orders, and delivery rates will continue to plummet,” he says.

Market dynamics will also see availability of used 777-300ERs increasing, “but not directly as a result of initial A350-1000 customers”, Evans says. “It is happening anyway, as the three Gulf network carriers will replace their older aircraft with the 777-8/9."

In 1974, when Airbus debuted the A300, it introduced to the world the concept of the “big twin”. With the A350-1000 poised to make its service debut this year, we should not have to wait much longer to find out whether Airbus finally has another machine that can own the “big-twin” market.