Intense competition, the lack of a budget arm, and poor fuel hedges continue to plague the Cathay Pacific Group, leading it to its worst interim loss in at least two decades.

On 16 August, Cathay announced an operating loss of HK$1.7 billion($217.3 million) for the first six months of the year, a sharp reversal from its HK$664 million profit a year ago. Its attributable net loss amounted to HK$2.05 billion, a drastic downturn from the HK$353 million gain last year.

The airline was due to release its results at noon, but this was delayed to 4.30pm, sparking speculation of a market-moving announcement. Chief executive Rupert Hogg, however, later told the press that the delay was due to a board meeting going longer than planned.

Despite Cathay's transformation programme announced earlier this year, it remains to be seen whether its planned initiatives are enough to combat the strong headwinds. Its poor first-half performance continues from a HK$575 million net loss in 2016, its first since the 2008 global financial crisis. 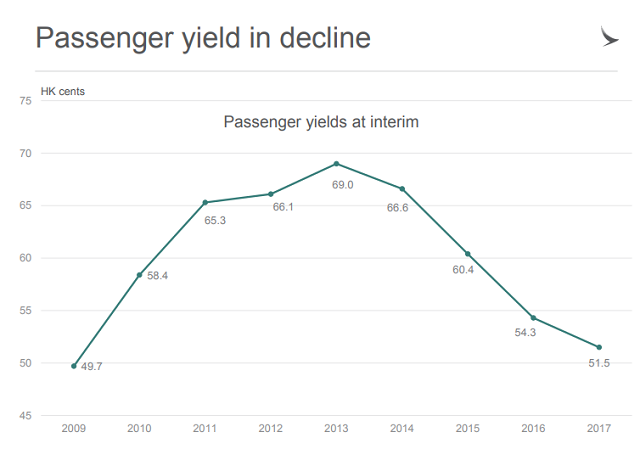 In an analyst briefing in Hong Kong on Wednesday, the group admitted to feeling the heat from competition both at home and abroad, which forced it to lower ticket prices, resulting in a 5.2% drop in yields. Its interim passenger yield of HK$0.515, is its lowest since 2010.

Cathay's director of commercial and cargo Ronald Lam says that while the group raised capacity by a mere 1.1% during the six months, this was not the case for other Hong Kong carriers. CapStats data shows that both Hong Kong Airlines and HK Express aggressively increased capacity by over 30% in the first half of the year.

The Hong Kong flag carrier has long been facing competition from gulf carriers on European routes. In recent years, the rapid increase in direct capacity between China and North America, Australia and Europe, has made make transits in Hong Kong redundant.

Yields on routes to mainland China and Southeast Asia have also been under pressure because of increased competition, particularly from low-cost carriers, Cathay admits.

On a brighter note, the airline has seen improved volume in the premium cabin, driven by a rebound in corporate travel. It expects yields to improve in the second half.

What is the airline doing, however, to drive the topline? A fair question given passenger revenue fell 3.9% for the six months.

Lam says Cathay will win customers by improving its proposition and giving them greater value for money. Part of this involves differentiating the airline from peers, even towards the back of the cabin.

It also "recognises the need" to tap on the more price-sensitive end of the market, through initiatives such as its "fanfare" promotions, where discounts are offered on a limited number of seats for a limited time. For years, the group dismissed the need for a low-cost arm. Even if it decided to do a volte-face and launch an LCC unit, it could well be too late given slot constraints at Hong Kong International airport.

In the front end, Cathay will continue to build on its premium branding by having the most convenient schedule and best product to win high-yield customers. An example is the test of new business class catering, which the airline says has already seen some "early success".

It is also exploring ways to develop more ancillary revenue streams, and has launched a bidding system for passengers to upgrade their seats.

Cathay has also promised to take a more "agile approach" when it comes to network planning, examples can be seen in the launch of seasonal services to Barcelona and Christchurch this year.

"This will allow us to fail early if necessary, but we will take more risk in trying out new destinations," says Lam.

As part of its three-year transformation, Cathay wants to boost productivity and cut costs by $4 billion. This will see 600 job cuts at head office, an ongoing process that saw Cathay book a redundancy charge of HK$224 million in the first half. Chairman John Slosar expects to see the benefits of the transformation in the second half of 2017, with the effects to accelerate in 2018.

Another monster cost issue is Cathay's fuel hedges through to 2019. These range from $75.5 to $90.3 per barrel, way above current levels.

"Our problem was not thinking fuel would fall below $60 per barrel in 2014 and at that time we were looking at hedging four years, which made us an outlier. We got the range wrong and when you get the range wrong, you're adding risks rather than taking it off," says chief financial officer Martin Murray. The airline has since amended its hedging policy with a two-year limit in place.

The airline's higher borrowings and lower income have also pushed its debt to equity ratio to 1.04, its highest level ever, leaving some analysts worried. Part of this is due to high capital expenditure as it takes deliveries of Airbus A350-900s.

Murray assures that there is no cause for alarm, with the airline well within its financial covenants and with numerous peers having a gearing of above two. The ratio is also expected to improve as its A350 deliveries taper out.

For the second half of the year, Cathay does not expect the operating environment to improve, with strong competition and fuel hedging losses to continue. The only bright spot is in its cargo business, where robust demand is expected to boost cargo capacity, yield and load factors. The group will need to leverage on this to pull up its overall performance. 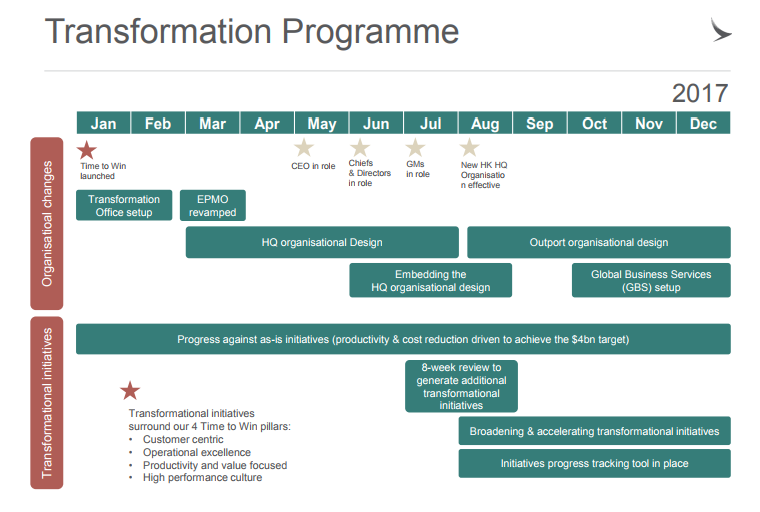 Slosar concludes that besides cost savings, the transformation programme must strengthen the Cathay brand in a challenging business environment.

"The objective is a long term sustainable recovery in revenues and financial performance, in which we compete successfully in an industry that is undergoing fundamental structural changes," he adds.

UOB KayHian aviation transport analyst K. Ajith says it remains to be seen if Cathay can hold on until global capacity growth moderates, since competition is likely to gain market share at its expense. He maintains a sell rating on the airline.

While there have been talks about Air China possibly making a bid for Cathay, Ajith sees little reasons for the Chinese flag carrier to focus on the Hong Kong hub, which does not have cabotage rights to the rest of China. The Star Alliance carrier is also facing problems of its own as key Chinese competitors have formed partnerships with the likes of Delta Air Lines and American Airlines, threatening its leadership at home.

Without a white knight, one thing is for sure: Cathay's chief executive Hogg, who took over the top job in May, has work cut out for him over the next three years.