Competition between China's big-three airlines looks set to soar, especially in Beijing, with the regulator's move to ease its policy of having only one operator on each long-haul route.

Besides boosting competition, the revised policy, which kicks in on 1 October, is also aimed at building Beijing into one of the world's largest aviation hubs, as the city prepares to open a second airport next year.

The Chinese regulator has made clear that the two airports will be seen as a single market, and that routes out of either gateway to the same destination, will be considered the same.

The opening of a new airport in the Chinese capital, however, presents new opportunities for China Eastern Airlines and China Southern Airlines. The two SkyTeam carriers have been designated anchor operators at the Daxing airport, which will have an annual capacity of 72 million when operational.

Finally, they will get the chance to go head-on with Air China, which dominates lucrative long-haul routes out of Beijing.

FlightGlobal schedules data shows that Air China accounts for 38.4% of all seats out of Beijing Capital International airport (BCIA), well ahead of China Southern (13.1%) and China Eastern (12.7%). Its subsidiary Shenzhen Airlines also has a 1.5% share of seats, and its associate Shandong Airlines another 1.4%.

Air China intercontinental network out of Beijing - May 2018

As the anchor operator at BCIA, Air China also has rights to lucrative routes to North America, such as Los Angeles, San Francisco and New York JFK. It also flies to the key European cities of London, Paris and Frankfurt from Beijing. In the southern hemisphere, it connects to Melbourne, Sydney, Brisbane and Auckland.

Beijing is much coveted as a hub due to its position as the country's historical and political centre. Airlines want to fly in and out of the airport, but this has not been possible due to slot constraints.

Under the new routes, carriers can seek to fly a long-haul route – to the Americas, Europe (excluding Russia), Oceania and Africa – that another Chinese airline already operates. Factors the regulator will consider include China's market share on the route against foreign airlines, consumer interests on the route, how it helps with hub development, resource allocation and service quality.

So far, the three state-owned carriers have largely played on their own turf. Flag carrier Air China in Beijing, China Eastern in the financial centre of Shanghai, and China Southern in the port city of Guangzhou. With the liberalisation of the one-airline-on-each-long-haul-route policy, however, things could change.

Air China for one will need to up its game, as China Eastern and China Southern have already announced plans for strong growth out of Beijing.

China Southern, the largest of the three by fleet size, has said that it will base 250 aircraft at the new Beijing airport by 2025, more than three times the number of aircraft it has at BCIA. It will have a "double-hub" strategy using Beijing and its main base Guangzhou, building its international and domestic networks out of Beijing.

It believes that the Chinese capital will be an ideal location for international passengers to transit onto domestic flights. The strategy is thus to build Beijing as a hub where the two networks converge, and to launch intercontinental services to Europe and North America.

Currently, its only intercontinental route out of Beijing is to Amsterdam, although it also flies regionally to Ho Chi Minh City and Tashkent.

China Southern's network out of Beijing – May 2018

Its strengthened position at Beijing could even give new life to the five Airbus A380s in its fleet – China's only superjumbos. China Southern has been unable to use the A380s on key services out of Beijing to Europe and the USA since taking delivery of the type in 2011, as a result pf regulatory resistance preventing Chinese carriers from competing directly on international routes.

It had tried to jointly operate the type with Air China out of Beijing, but the flag carrier had insisted that it wanted only to wet-lease the aircraft. Hit by roadblocks, it plied the aircraft on domestic routes, and FlightGlobal schedules data shows that at present the jet is only used on its 10-times-weekly Guangzhou-Los Angeles service. Its 2017 annual report shows that the A380s have an average daily utilisation of just 8.8 hours, with a load factor of about 69%.

Shanghai-based China Eastern, meanwhile, has also said that it will base up to 200 aircraft at the new airport. Chairman Liu Shaoyong has also pushed for the gateway to be given priority of international slots so as to allow major airlines based there to open new routes.

China Eastern network out of Beijing - May 2018 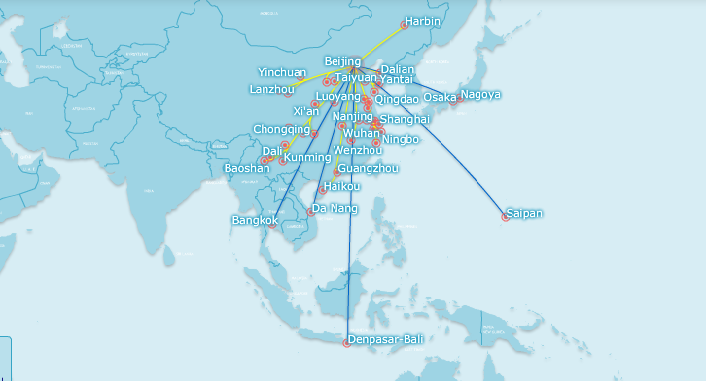 At present, China Eastern has no long-haul routes out of Beijing. The only international services it operates from there are to Bangkok, Danang, Denpasar, Nagoya, Osaka and Saipan, FlightGlobal schedules data shows.

"Air China will certainly face greater competition from China Southern and China Eastern when they ramp up their capacity expansion out of their Beijing hub," says Corrine Png, chief executive of Crucial Perspective.

She adds however, that the duo's move to the new airport will also free up room for Air China to expand and improve its efficiency at BCIA. This will in turn boost the airline's cost competitiveness and facilitate connecting traffic from its Star Alliance airline partners.

With BCIA already the world's second busiest airport in terms of passenger numbers, Beijing's status as one of the world's largest aviation hubs will only rise with the opening of the second gateway.