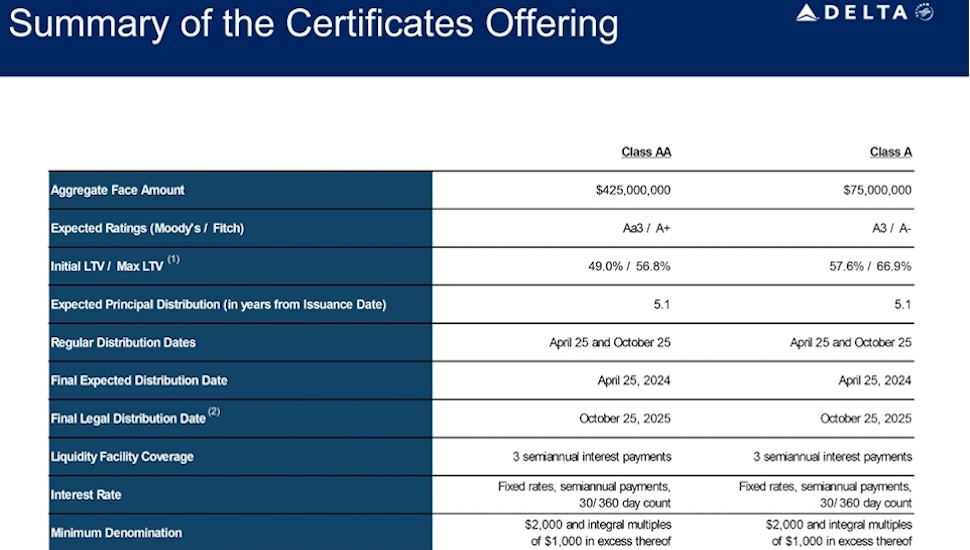 Strong investor interest from Delta's corporate funding approach to the transaction, buoyed by scarcity of EETC paper from the airline, helped drive the low rates. The airline's investment grade balance sheet plus the bullet maturities in 2024 of both tranches, which helped attract new investors to the EETC, contributed to the high oversubscription of the 2019-1 notes, FlightGlobal understands.

In addition, Delta will not extract as much of the value from the 14 aircraft in the collateral pool as it could at the beginning of the transaction. The loan-to-value (LTV) will rise over the term of the debt, instead of the traditional EETC model of declining, because it is a bullet maturity.

Delta's investment grade balance sheet allowed it to take this approach. It has the flexibility to tap low-cost corporate unsecured debt as well as commercial bank loans and attractive lease rates from sale-and-leasebacks (SLBs).

Other carriers that could do a similar EETC include British Airways and Qantas Airways, both of which also benefit from investment grade ratings. Frequent issuers American Airlines and United Airlines would likely face challenges doing a similarly structured transaction, FlightGlobal understands.

Delta is evaluating funding options for its 2019 deliveries, which total 87 new aircraft, Delta managing director of fleet management Daniel Pietzrak told FlightGlobal at the conference in Orlando this week. It financed three aircraft through SLBs with BBAM in March.

The airline forecasts $4.7 billion in capital expenditures this year.