Mike Lombardi is looking for an unusual aircraft model, but distractions come easily in the bowels of the Bellevue, Washington office building where Boeing keeps its corporate archive.

The plan during this half-hour tour is to find the rare aircraft models that reveal Boeing’s alternative configurations for what became the 737-100, the aircraft that celebrates the 50th anniversary of its first flight on 9 April, beginning a remarkable half-century operational run that is set up to continue with new deliveries of the 737 Max for at least another decade. 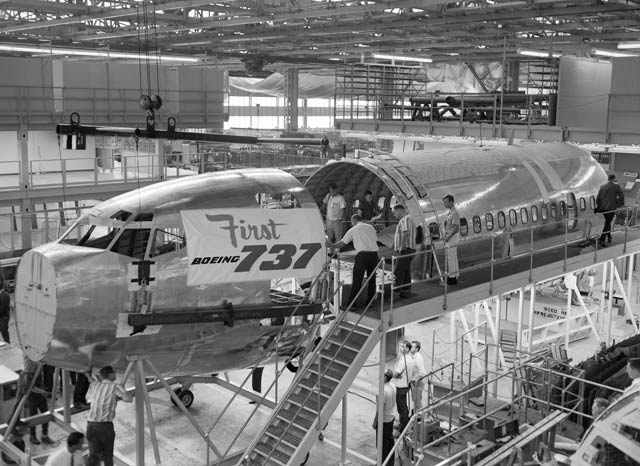 Lombardi begins an impromptu narration as he continues his search for the elusive models, summarising the narrowbody market environment in 1964 when Boeing launched the 737. “When they decided to launch this airplane, the [Douglas] DC-9 already had orders and the [BAC] One-Eleven was already in service,” he says.

Indeed, it was not just the DC-9 and One-Eleven that the 737-100 would be up against to win orders in the late 1960s. Long before the existence of the Airbus-Boeing duopoly, airlines were spoiled for choice in the narrowbody sector. Fokker also was producing the F28 Fellowship and North American was exploring a similar concept called the CenturyLiner.

Lombardi’s 737-focused tour could not remain on topic for long. On the way down a long corridor stacked haphazardly with models of one-off Boeing concept aircraft, he passed a model of a Sonic Cruiser. But this was not the well-known, 200-250-seat concept with a cruise speed up to Mach 0.98 that was cancelled almost 15 years ago. No, this was the almost-forgotten Sonic Cruiser concept that Boeing seriously considered in the early 1970s. The similarity was striking.

“That was the same idea as the [early-2000s] Sonic Cruiser and it actually ran up against the same exact issues for not going into service,” Lombardi says. Economics, perhaps? “The economics, yes,” he replies.

As the walk down the corridor continues, Lombardi stops at more aircraft models – a 7E7 (the marketing concept that preceded the 787) and the C-16 (Boeing’s trijet alternative to the McDonnell Douglas C-17 military airlifter) – and lengthy digressions ensue.

Finally, Lombardi comes upon the object of the search – the 737-100. This 737-100, however, looks unfamiliar. It sports a T-tail and engines mounted to the aft fuselage, 727-style. It wasn’t immediately detectable, but this aircraft was also narrower than the 727, accommodating only five seats in each row instead of six.

As he examined the model, Lombardi thought back to his last conversation with Joe Sutter, Boeing’s legendary chief engineer for the 747, who died last August. Sutter will always be remembered as the father of the 747, but he also played an instrumental role in the 737. He came up with the idea of placing the engines under the wings, rather than on the aft fuselage.

“Joe told me one of things he’s most proud of is… making the 737 right and moving the engines,” Lombardi says. “That took away all of that extra weight for the structure back there that enabled them to widen the fuselage so it could go three-three [abreast] instead of the three-two, which it would have been. That really made a difference with the airplane.”

More than 13,800 deliveries later, it’s clear that slight change made all the difference. In a few years, the Airbus A320 family may close in on the 737’s order record, but its early contemporaries were left in the dust. The DC-9 and follow-on derivatives totalled 2,438 deliveries over a 40-year production run. BAC and Fokker, once formidable rivals to the 737, each delivered about 240 aircraft. North American dropped the CenturyLiner concept before production.

But that success masks the irony of the 737’s status within Boeing. About once every decade since it came into existence, Boeing executives seriously thought about abandoning the 737. In a way, the 737 is the ultimate survivor, enduring not only market cyclicality but wild swings of enthusiasm about the jet within Boeing. Its history is not unlike Lombardi’s search for the 737-100 models in the bowels of Boeing’s archive, with the ultimate objective finally reached despite entertaining so many fascinating distractions along the way. 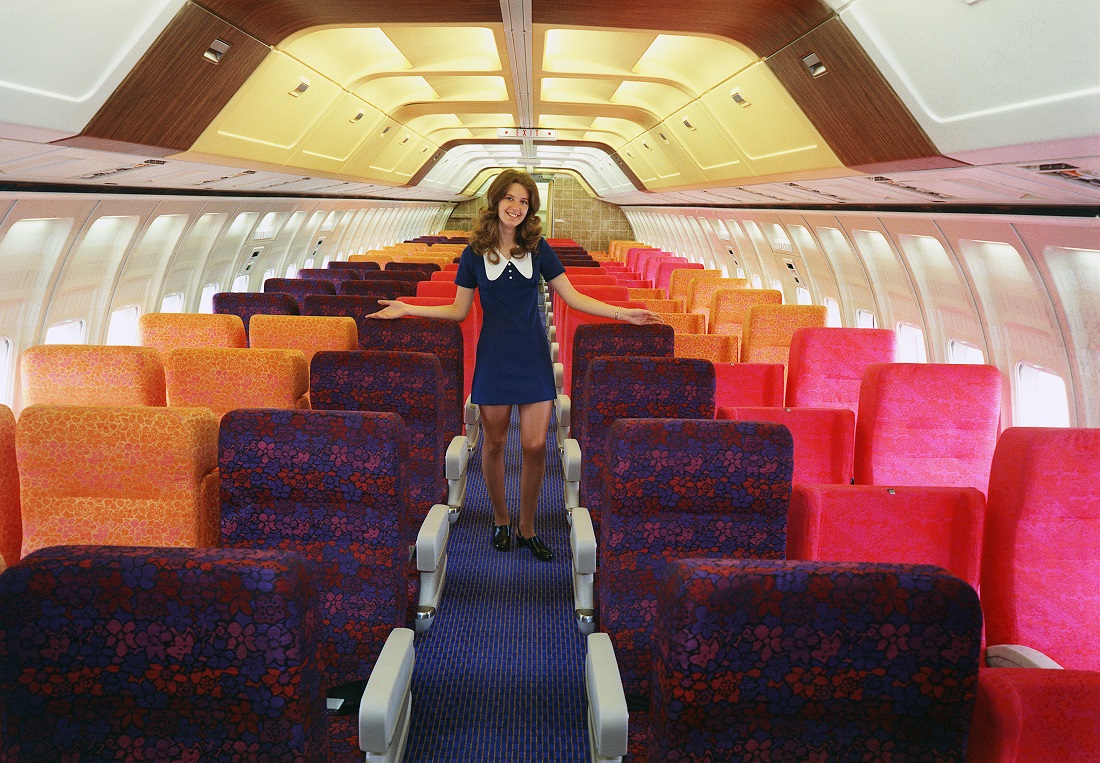 For a public audience, Boeing first lifted the veil on the 737 design in October 1964. On stage at the Air Transport Association’s maintenance and engineering conference, Boeing chief project engineer Jack Steiner revealed a configuration that his audience was probably not expecting. This was, after all, Boeing’s first proposed new product since the 727, which had beguiled the aviation community with its T-tail and aft-mounted engines as much as it perplexed with its elaborate high-lift systems. In those days, such sophisticated wing-mounted technology raised concerns about maintenance costs and dispatch reliability.

Almost in defiance of expectations, the 737 concept that Steiner unveiled at the ATA conference featured a conventional tail with wing-mounted engines. Flight International’s journalist at the event described the decision as a “reversion” to 707-style wing-mounted engines, obviously disappointed by the comparison with the 727. Perhaps adding further to the audience’s disappointment, the 737 would also come with advanced high-lift devices. It was a reaction that Steiner had anticipated.

He said: “By now I suppose the whole aviation world is aware that wing design has been divided into two camps. Those who feel that high-speed swept wings must have leading-edge devices regardless of the size of the aircraft, and those who don’t. Boeing is of course in the former camp, and at times it has seemed as if it was Boeing versus the world.”

In this case, the world was wrong, but it would take a surprisingly long time for that to become obvious.

Only three months after Steiner unveiled the 737, Boeing’s board of directors was seriously considering cancelling the project, letting it go the way of the CenturyLiner. Facing a $150 million development bill, the board met on 1 February to make a launch decision with only Lufthansa as a tentative buyer and United as a longer-term prospect. Chief executive Bill Allen seemed particularly unenthusiastic, but the board was swayed by Boeing chief engineer Ed Wells’ argument, which predicted that a go-ahead decision would lead to a United order.

That was enough to get the 737 programme off to a decent – albeit unspectacular – start. But the original 737 family would need another boost a decade later. The early 1970s was a particularly bleak period in Boeing history, with the Supersonic Transport programme cancelled, the 747 struggling to ramp up deliveries, and the economy in a bad way. It was not a good time for a Boeing programme to hit a sales slump, but the 737 could not avoid it.

After peaking in 1969 with 114 deliveries, the 737 programme managed to ship only 22 aircraft in 1972. There were rumours that Boeing wanted to sell the tooling and the design to the Japanese, whose industry was seeking a path into the commercial aircraft manufacturing market.

The US Air Force came to the rescue, placing an order for 737-200s to serve as navigator trainers; the T-43 (below) features a modified airframe, to accommodate five periscopic sextants. 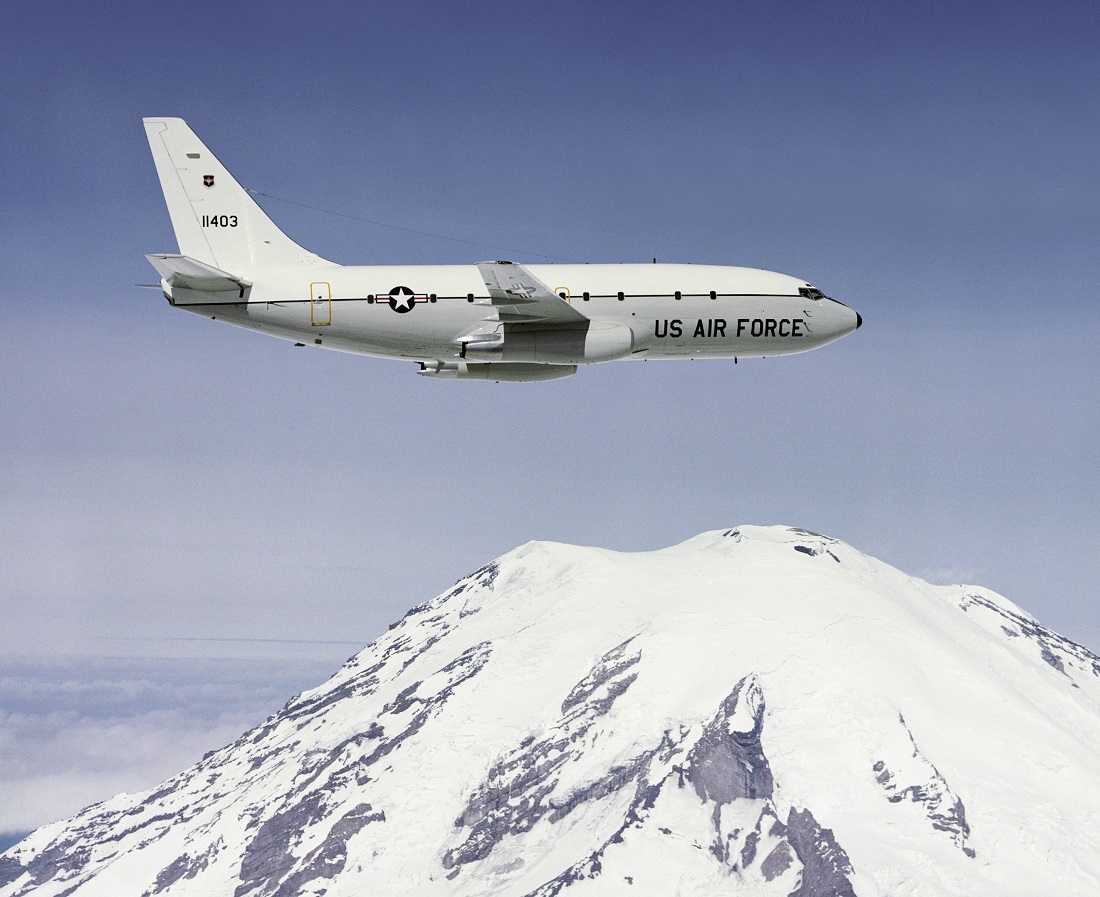 “In 1972, the 737 had 19 orders [in backlog]. Everything was bad,” Lombardi says. “The order that saved the 737 was the Air Force came in and ordered the T-43.” As those aircraft were delivered through 1974, Boeing found a new market for the original 737 family in Africa. Deliveries of new 737s to African airlines kept the programme alive long enough to witness the deregulation of the US airline industry in 1978. Suddenly, a six-abreast narrowbody aircraft, particularly when fitted with a new class of high-bypass turbofan engines, had a thriving, growing customer base. 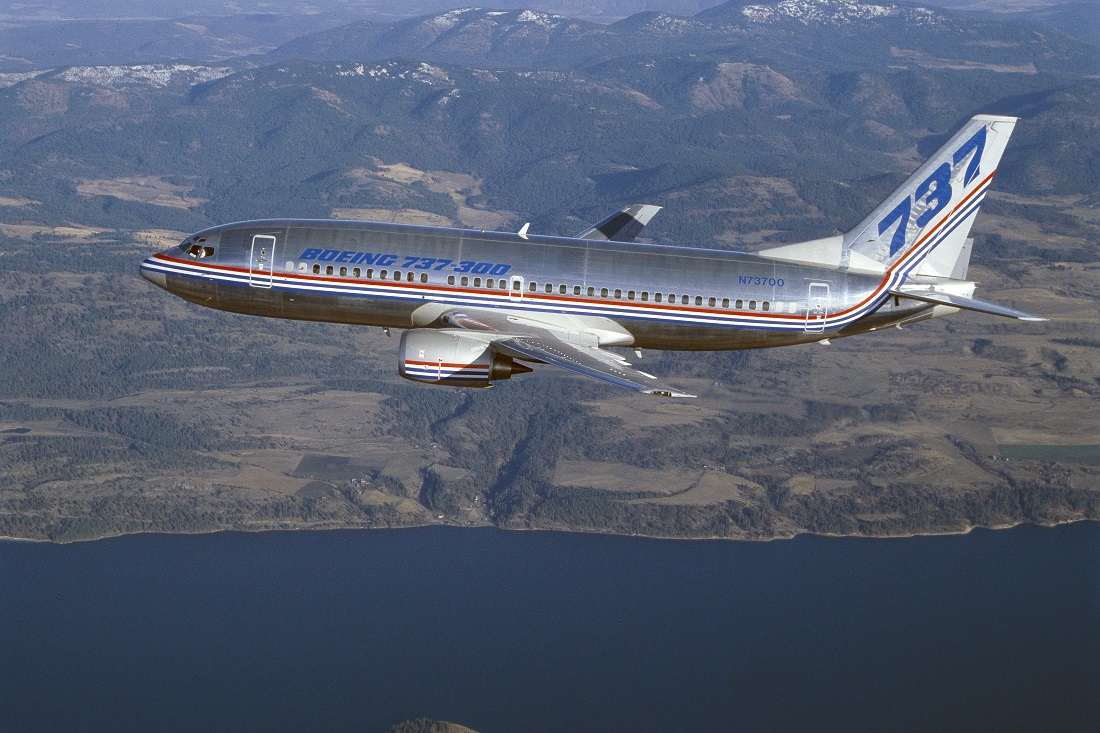 Recognising the shift in the market, Boeing plucked a struggling engine programme – CFM International’s CFM56 – out of obscurity and installed it on a new family of 737s now referred to as the “Classic” series. In fact, the decision to pair the 737 with the CFM56 would lead to the most successful combination in the history of the jet era. Airbus was quick to recognise a new market with boundless potential, proposing the A320, six-abreast like the 737 but with a slightly wider fuselage and fly-by-wire flight controls.

Boeing, however, still seemed to have the upper hand. It had a lead on new engine technology in development by GE Aviation and a team of Allison and Pratt & Whitney. The unducted fan engine – now usually referred to as open rotor – promised a step-change in fuel efficiency. By removing the inlet casing and allowing a counter-rotating set of enlarged fan blades to spin freely, the engine manufacturers promised to deliver a huge improvement in fuel efficiency. Compared with the CFM56’s 6:1 bypass ratio, the unducted fan pushed that fuel economy metric to 40:1. 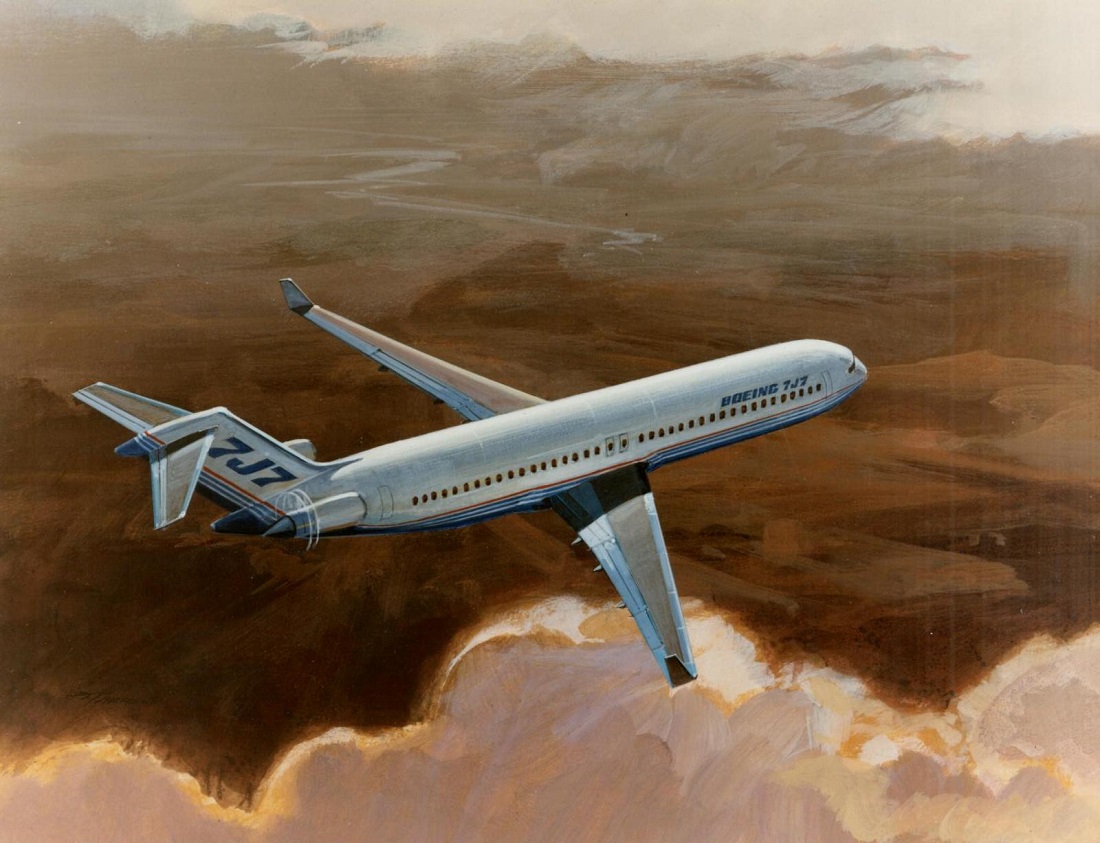 Along with such revolutionary engines, Boeing was prepared to pull out all the stops on this new aircraft, which was launched into preliminary design in 1985 as the 7J7 (above). The width of the six-abreast fuselage would be 164in, or 8.5in wider than the A320 and 16in wider than a 737. The 7J7 would feature advanced composites in the empennage and cabin floor, with fly-by-wire technology introduced into a Boeing cockpit.

The plan was to deliver the 7J7 in 1992, but Boeing’s interest in the project plunged at almost the same rate as fuel prices in the late-1980s. With fuel costs declining, airline demand for revolutionary fuel-saving engine technology also fell. By 1987, Boeing had re-scoped the fuselage with a 188in diameter, nearly the dimensions of the 767 yet with six-abreast seating. In the end, the project was shelved in 1989 after a $500 million investment and the realisation that unducted fan engine technology was not ready to enter service after all: unducted, counter-rotating fan blades spinning at nearly the speed of sound create a lot of noise.

“Not only did you have the sideline noise to deal with but just on the airplane itself [the noise] fatigued the airframe,” Lombardi says. “They would have had to beef up that structure so much it would have had added a lot of weight.”

Nearly 10 years later, Boeing finally responded to the A320 family with the next-generation 737. It featured an improved version of the CFM56, a larger wing and updated avionics, but lacked the 7J7’s more ambitious incorporation of fly-by-wire and lightweight structures.

It did not take long for Boeing to start thinking about moving past the 737 yet again. In the early 2000s, as aircraft orders plummeted, Boeing returned to a strategy used during a similar economic period in the 1970s.

“They were following what we had done in the late 1970s – what we call the ‘homework period’,” Lombardi says. “It was during a downturn in the market, so they stepped back and studied everything. It was to build a baseline of knowledge for future airplanes.”

That homework period 15 years ago produced a series of new aircraft concepts, including plans for a New Single Aisle (NSA) product to replace the 737 around the latter half of this decade. But engine technology intervened again, this time with Pratt & Whitney’s geared turbofan engine. Bombardier selected the new engine with a 12:1 bypass ratio for its CSeries aircraft family in 2008. That prompted Airbus to respond with the re-engined A320neo in December 2010, rather than a new clean-sheet aircraft. Jim Albaugh, the then chief executive of Boeing Commercial Airplanes, for several months fiercely resisted proposals to re-engine the 737, but finally bowed to the inevitable after losing a blockbuster American Airlines order to the A320 in July 2011.