ANALYSIS: How Air Berlin capacity has been replaced

While Europe has lost its share of established carriers over the last decade, none has been bigger than the collapse of Air Berlin last autumn.

The group and its subsidiary carriers, notably Austrian leisure unit Niki, at its peak carried over 35 million passengers annually. Its network included routes serving some of the most in-demand holiday markets in Europe.

Little wonder, then, that there should be no shortage of suitors to step into those markets.

Lufthansa, EasyJet, Level, Wizz Air, Condor and Ryanair – together with its new partner Laudamotion – are all among those to have moved into the space vacated by Air Berlin. Many of those acquired assets from administrators of the disparate group in order to help stake claims in these markets.

But such is the competition and expansion costs, that there are some early growing pains for some of these operations. Ryanair – which is taking a majority share in Laudamotion – has flagged that the unit faces a "difficult" first year and will not reach break even until its third year of operations. Lufthansa described the first half as "very busy and stressful" for Eurowings.

EasyJet cited costs related to its expansion into Tegel and integration of Air Berlin assets after sliding to a first-half loss. Despite boosting its full-year outlook after a strong third quarter, the UK carrier deepened its projection of losses related to its Berlin operations as a result of weaker yields from additional capacity in this market.

Indeed, attempts by German consultancy SBC to get Air Berlin's former Swiss charter operation Belair back in the sky fell flat when prospective investors pulled out, prompting the carrier to file for insolvency in August.

Air Berlin had already reduced its operations on in its own behalf, even before its financial problems caught up with it. Most notably that included a wet-lease tie-up with German rival Lufthansa, covering 30 Airbus narrowbodies operating under the Eurowings umbrella. 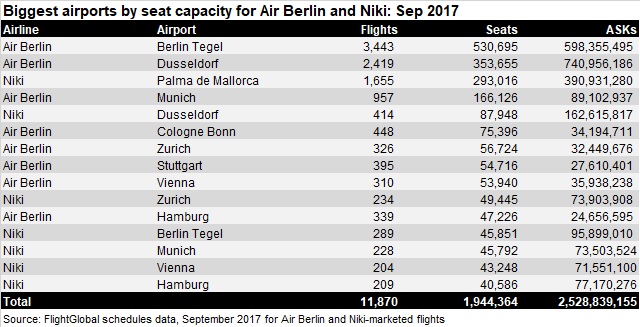 Air Berlin's flying was split across a number of bases in Germany, Austria and Switzerland to a wide range of destinations. That was also the case with Niki, but much of its flying was focused on serving Palma de Mallorca from these various points.

That capacity, at least at its largest base Berlin Tegel, has been more than replaced by other carriers in the year since.

EasyJet, which had already been active at Berlin Schonefeld airport, is now the biggest operator at Tegel after acquiring slots and assets from Air Berlin's administrators. It began flights from Tegel at the start of the year and this September will operate more than 50 routes from the airport. These include its first German domestic routes.

While integration costs have been higher than expected, EasyJet chief executive Johan Lundgren told FlightGlobal in July that "we always knew that the first few months was going to be difficult commercially, because we were basically inheriting a flawed schedule". As an example, he cites the "seven or eight" dailies EasyJet is currently flying between Berlin and Frankfurt. "But we need to fly them to get the slots," he points out.

The aim for EasyJet is to become "the Berliners' airline", he adds. At Tegel, EasyJet's pan-European credentials are manifesting themselves in "good sales coming not only out from Berlin but also [inbound], which Air Berlin didn't have".

Eurowings too has rapidly stepped up its presence at the airport, even after accounting for the transfer of the remaining Germanwings operations switched to the Eurowings brand. Other carriers within Lufthansa Group – Austrian Airlines, Swiss and Lufthansa mainline – have also all increased their seat capacity out of Tegel.

While the lion's share of Tegel capacity was operated by Air Berlin, Niki also had a small presence at Tegel. After a protracted sale process, the assets of Niki were ultimately picked up by the carrier’s founder – Niki Lauda – through Laudamotion. Lauda quickly struck a deal to sell the majority of the carrier to Ryanair – a move cleared in July – and the new operation gives the Irish carrier a foothold at Tegel.

Ryanair began its first Tegel flights in its own right – a daily service to Palma de Mallorca – in June. The carrier's Berlin operations until now have been focused on the city’s Schonefeld airport.

If much of the initial focus of attention following Air Berlin's collapse was on Tegel, Vienna has more recently been the key market. While the Austrian capital accounted for a relatively small amount of Air Berlin and Niki's seats in September 2017, combined they were the third biggest provider of capacity at Vienna.

FlightGlobal schedules data shows, thought, that seat capacity is running 11% higher this September out of Vienna than in the same month last year, with much of the new capacity driven by low-cost carriers.

IAG's interest in developing low-cost operations at Vienna were already clear after it bid – initially successfully – for the assets of Niki with a view to establishing a new operation related to budget unit Vueling.

After missing out on Niki, IAG in July launched a new Austrian-based low-cost carrier under its Level brand, using four Airbus A321 narrowbodies sourced from Air Berlin.

The new short-haul subsidiary has an Austrian air operator's certificate and now operates 14 routes out Vienna – around half of which are to Spanish destinations.

FlightGlobal schedules data shows that Lufthansa subsidiary Austrian Airlines will be a competitor on eight of the routes – three of which are also operated by Eurowings.

Wizz and Laudamotion had already activated new bases at Vienna this summer, while EasyJet has doubled its seat capacity out of the Austrian city – including three new routes, notably a high-frequency Tegel connection.

Lufthansa, though, is "well prepared" for the arrival of additional competition at Vienna airport, argues the airline group's finance chief Ulrik Svensson.

Briefing analysts at the end of July, Svensson acknowledged "a large gathering of many competitors" at the Austrian capital's gateway but added that this was "nothing which is new for us". He notes that the German carrier faces increased competition at its Frankfurt base.

Air Berlin was the second-biggest operator in terms of seat capacity at Munich airport at the time of its collapse. Again, the airport has been able to more than withstand the loss of the carrier as seat capacity is 2% higher this September than the same month in 2017, FlightGlobal schedules data shows.

Lufthansa, the biggest operator at the airport by a distance, and Eurowings have both expanded rapidly. Eurowings has doubled its seat capacity, factoring in its takeover of some formerly Germanwings-marketed services, and is now the second-biggest carrier at Munich.

EasyJet has also doubled its seat capacity at Munich, while Ryanair and Laudamotion have added their first flights from the German airport, serving Dublin and Palma de Mallorca respectively.

Seat capacity this September is also fractionally higher at Zurich, another airport that featured prominently within Air Berlin and Niki's flight schedules.

Lufthansa Group carrier Swiss has increased its seat capacity by the highest amount since then. Eurowings – having taken on the former Germanwings routes connecting the Swiss city with Cologne, Dusseldorf and Hamburg – has also added capacity to these services.

The addition of high-frequency connection from Tegel and a new Porto service mean that EasyJet has raised its Zurich capacity by more than half, even with the ending of its Hamburg flight in March.

Dusseldorf was Air Berlin's second-largest airport by seat capacity in September 2017. It is the only one of the carrier's major bases at which seat capacity is down this September than in 2017, FlightGlobal schedules data shows.

Eurowings is now comfortably the biggest operator at Dusseldorf. It has increased its seat capacity 50% since September 2017, which includes the switching of some remaining Germanwings flights.

Thomas Cook unit Condor has doubled its presence at Dusseldorf and is now the second-biggest operator at the airport. It has raised frequency across the majority of its network from Dusseldorf, most notably to Palma de Mallorca. Thomas Cook had also grown through assets from the old Air Berlin operation, acquiring the Air Berlin Aviation subsidiary in early January to help fuel its development at the airport.

EasyJet has made its debut at the airport with the domestic link from Tegel. Laudamotion has launched a dozen routes from Dusseldorf, of which more than half the seat capacity is deployed to Palma de Mallorca.

That Spanish island destination was at the heart of the former Niki schedules and remains a key destination in the leisure sector from the region. Seat capacity into Palma de Mallorca from Germany, Austria and Switzerland combined has climbed 8%, FlightGlobal schedules data for September shows.