In a period where the market for heavy rotorcraft has dried up, much of the good news for Airbus Helicopters is coming from its German factory and is being generated by the pair of twin-engined, medium-class platforms it produces there, the H135 and H145.

According to its third-quarter sales figures, between them the two aircraft accounted for 211 of total net orders, registering respective figures of 42 and 47 for the nine months ended 30 September.

For the H135, which celebrated its 20th anniversary earlier this year, the feat is particularly impressive given that it is a product originally conceived in the 1970s, predating the formation of Eurocopter. 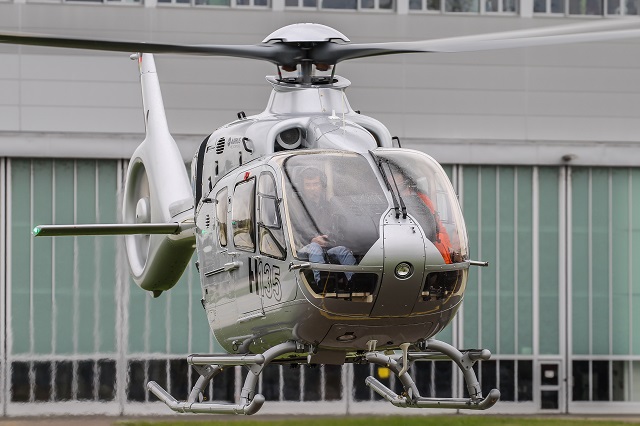 Of course, the 2.9t maximum take-off weight helicopter has gone through multiple iterations since the first delivery to launch operator DRF Luftrettung in 1996.

The latest, the P3/T3 – the letters denote either Pratt & Whitney or Turbomeca (now Safran Helicopter Engines) powerplants – arrived in late 2014 and saw the addition of a number of enhancements to improve hot and high performance.

In October 2015 the manufacturer announced that it would bring a further upgrade to the type with the addition of the Helionix avionics system which is used on the H145 and super-medium H175.

All this chopping and changing has caused a problem, however: from next year, when the first Helionix-equipped example is delivered, three distinct versions of the H135 will be produced at its Donauwörth factory. These will comprise the P3/T3 models both with and without Helionix, plus a lingering tail of P2/T2s, the latter representing about 10% of the total backlog.

This, says programme manager Axel Humpert, is less than efficient: “It is one of my concerns because it is not providing me the cost benefits with my production because I have to service several variants,” he says.

The strategy from mid-2018 is to build only Helionix-enabled P3/T3 helicopters and phase out the older variant. Negotiations are ongoing with customers for helicopters fitted with the current-generation cockpit and the P2/T2 over switching to the latest variant, but Humpert concedes that some will stick to their guns, simply for reasons of fleet commonality.

In that situation – with deliveries contracted until 2019 – the rotorcraft will be assembled earlier and then parked to enable the production cut-off in 2018. 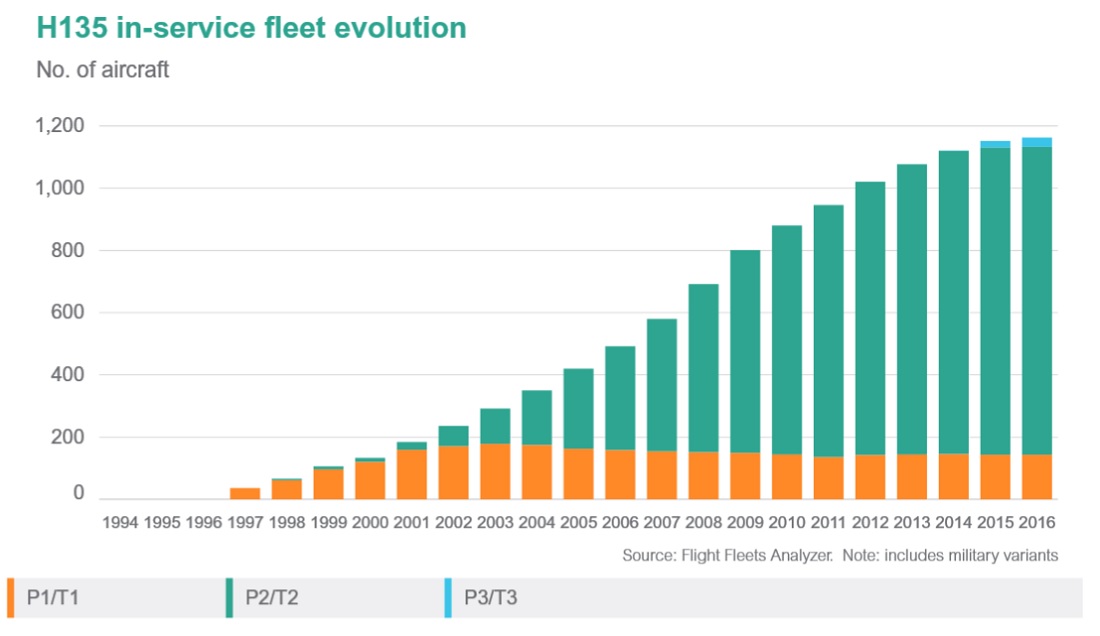 As well as new-build helicopters, an enhancement package is available to raise the in-service examples of the previous version to the P3/T3 standard.

Humpert says there are “lots of upgrade prospects”, with 145 offers out to the market. It is mainly driven by improvements to the FADEC software, but the repositioning of the air inlet cowlings – moving them to the side rather than the front of the aircraft – is a “major driver to improve available power” through a “significant reduction” in engine installation losses.

Previously, air had to bypass lots of equipment on the way to the aft engine deck, causing pressure loss and a temperature increase of about 3°C (5.4°F), translating to a reduction in the engine power available, particularly at altitude or in hot conditions.

In addition, the rotor diameter grows to 10.4m (34ft) from 10.2m previously, combining with the other changes to significantly lift hot and high performance.

The longer blades have another benefit too: because there is less rotor loading, noise emissions are cut to 8.4dB below ICAO limits, making the H135 one of the quietest in its class. “Customer feedback is that the helicopter is much less noisy,” says Humpert.

Backlog for the type stands at about 80 units, and “as the market is coming back again” the production rate is rising from 36 aircraft last year to 48 in 2016 and to 64 next year. “So this is one of the big challenges I am going through to manage the production ramp-up,” says Humpert. He is hopeful sales momentum can be maintained so that output can be held at the 2017 rate.

Since the programme started, the airframer has delivered a little over 1,220 examples of the helicopter to 350 customers in 75 countries.

Half of the operational fleet is engaged in emergency medical services (EMS) operations, 17% in business and commercial transport, 16% in public services (typically law enforcement), 10% in military missions, 4% in offshore operations (typically wind farm inspections), and the remaining 3% in military training.

Humpert is confident that the latter market is an area ripe for growth. Australia, Germany and Japan are all customers for H135 trainers, with the UK added to that list earlier in the year following its selection of the type for the country’s Military Flight Training System requirement.

Twenty-nine examples, powered by Safran Arrius 2B2+ turboshafts, will be supplied under the contract, with deliveries to begin in 2017. A bigger opportunity will also present itself next year when the US Navy begins an effort to replace its current fleet of Bell Helicopter TH-57 Sea Ranger trainers, which Airbus Helicopters anticipates responding to with the lighter, single-engined H125 and/or the H135.

It is a trend that Humpert thinks will continue as militaries shift away from training on light single-engined helicopters.

“More and more armies are training their pilots on light, entry-level twins as it is more economically efficient to prepare them for [front-line] missions on heavy twins. It seems to pay off for them,” he says.

China also presents a significant opportunity for the H135. Earlier this year Airbus Helicopters and its local partner, Sino-German Ecopark, formalised an agreement that will see the creation of a final assembly line for the type in Qingdao. In addition, it has secured orders from a consortium of local operators covering the first 100 helicopters to be produced at the new facility.

“The opening of the skies in China opens the opportunity for any manufacturer or operator to bring their aircraft into China. We believe [the new facility] will bring us into the front line for Chinese-assembled helicopters,” Humpert says.

Construction work on the new site will begin in 2017, with Chinese engineers and technicians training in Donauwörth in 2017 and 2018 on the first five helicopters. Production will begin at the Qingdao plant in 2018, initially with a mixture of Airbus Helicopters and local staff, with the aim of delivering the first rotorcraft built there from 2019. “And once production is stabilised, then we will leave it to the Chinese,” he adds.

The current contract is for 100 helicopters “but if it is only that it will not pay off” as an investment, Humpert says. Its production target from 2019-20 is 15 a year, “but we count that we will attract more customers by then”.

He adds: “It will be profitable once we have passed the 23-helicopter threshold.”

Airbus Helicopters’ strategy has seen the position of the H135 reinforced by the decision last year to ditch the AS355 Twin Squirrel – effectively a French-built competitor, at a similar price point to the German model but “less capable” – says Humpert.

“It has had experienced its good times; that is why we are replacing the twin-engined product policy with only the H135.

“Our strategy is to have this helicopter as a light-twin, low-cost entry model. That is why we have done significant work to reduce the costs on the H135.”

As well as holding the list price for the past three years – “we offer more helicopter for the same money” as Humpert puts it – work has been done to significantly reduce the H135’s direct maintenance costs.

These have come down by about 15% so far and Humpert believes “there is more in the pipe” to enable a 20% reduction over 2013 costs.

In addition, life limits have been removed on main rotor blades, and gearbox time-before-overhaul rates have risen to 3,600h. They will jump again to 4,000h next year and to 5,000h in 2018-19, assuming operational trials go to plan.

Of course, the H135 does not have the market to itself, with both the AgustaWestland AW109 and Bell 429 competing in the segment. In addition, there are signs that the Italian manufacturer is contemplating a successor to its current light twin, tentatively referred to as the AW209.

Humpert suggests that the arrival of a new contender in the market would be the obvious “trigger on our side to launch [a further upgrade]” but points to the 20 years of cost and reliability advantages that are currently in its favour.

“That is why do not fear [our competitors]. We are dominating the market with the H135. Even if the AW209 comes I believe it will be something more like the 429: heavier, more fuel consumption, less range, higher cost.”

Significantly, Airbus Helicopters has been maturing a basket of aerodynamic and technical improvements under its Bluecopter initiative. Although the manufacturer is at pains to point out these are largely platform agnostic and could be applied to any helicopter in its range, they have been demonstrated on one of the original EC135 prototypes.

Although Humpert acknowledges that technologies matured on the Bluecopter will find a place on the H135 in future, they will be applied only as part of an upgrade programme. “Once we are forced to do a step, it will be a step where we expect more than a small aerodynamic improvement,” he says.

And mitigating against any further near-term changes is that “customers would like to see a stabilisation of the production line or product line”. In other words, constant upgrades and an ever-growing number of variants make it much harder to maintain fleet commonality. “They would like us to maintain [one] configuration for a number of years.”

Speaking at the beginning of October at an event to mark the type’s 20th anniversary, Airbus Helicopters chief executive Guillaume Faury described the H135 as “a great success”, noting that it “represents very well the DNA of Airbus Helicopters”.

“Twenty years makes it sound like a very old aircraft but in reality it is very young,” he said.

Humpert is firmly behind this statement: “Twenty years is not a lot for a helicopter – past models were in production for a lot longer. It is still within the first half of its life – clearly there is a lot to come in future.”