When Lehman Brothers collapsed 10 years ago, it set in motion a financial crisis which was to have a profound impact on air travel.

The immediate impact was on demand, particularly at the much-prized premium end of the market.

Traffic would come back relatively quickly, though much of it in lower-yielding segments. But the longer-term impact was felt in financial markets, liquidity, and the implementation of austerity measures, the effects of which are still evident today.

Only in August, for example, did Greece finally exit the international bailout programme implemented to help it during the eurozone crisis, itself a product of the financial crash.

These continuing financial concerns not only impacted travel in a number of markets, but also some airlines' ability to ride out the storm. Two of Europe's stuttering carriers, Malev and Spanair, fell within a week of each other in early 2012, at the height of problems.

The combination of the sharp drop in air travel demand and plummeting oil prices – and the related hits on hedging – quickly translated into heavy financial losses for airlines. IATA figures show collective industry losses of $26 billion in 2008.

That was heavily impacted by US airline losses. Delta, United, US Airways and American between them posted net losses of more than $18 billion. Notably, 11 airline groups posted net losses in excess of $1 billion in 2008 – and none made profits of that magnitude.

While another year of losses was to follow, these years in the red were followed by the most profitable run in airline history. Fortunes had changed so much that in 2017, 16 airline groups recorded net profits in excess of $1 billion and only one – restructuring Etihad Airways – incurred a loss of the same magnitude. And US carriers now lead the profitability – Delta, Southwest, United and American collectively posted net profits of $11 billion in 2017.

The fluctuating oil price, the initial first sharp drop in which had begun before the financial crisis took place, has been a central part of that rosy financial picture. High fuel costs helped provide the impetus for airlines – notably in the USA – to pursue much of the consolidation and capacity restraint that has driven their improved profitability. Likewise, the unexpected fall in oil prices in the second half of 2014 provided a timely respite where airline costs were concerned.

Such has been the turnaround among US carriers that American Airlines chief Doug Parker a year ago said: "I don't think we’re ever going to lose money again. This is an airline and an industry that will be profitable in good and bad years."

Asked about that confidence, during an interview with FlightGlobal early this year, Parker first joked that he did say "think" in his comments but then explained that income did not fall to negative territory, if you considered American's current income and how much earnings had fallen during past recessions.

"I do believe the industry has been transformed fundamentally and structurally in a way that it's a real business now," said Parker. "There are lots of companies and businesses that don't lose money ever; it's just the airline business did it every other year. That's why it's a controversial statement."

His comments were backed by IAG chief executive Willie Walsh, speaking at the A4E Aviation Summit in March. "From an industry perspective, yes, I think he's right. Particularly if you're Doug Parker in the USA with the consolidation that they've had, I think that's a fair statement for him to make."

The one caveat for Walsh was that "the only people that will make that untrue are the people running the airlines themselves."

He added: "I've always said that historically, we can blame a lot of airline managers for the losses in the airline industry because they did the wrong things," Walsh continues, citing carriers that have pursued growth "without any understanding" of whether their strategy was sustainable or profitable.

"The capacity is being provided by the people who are efficient."

A more controlled approach to capacity from airlines is credited with much of the improved performance. But airlines, on a global basis, have still been sharply increasing capacity over this period. The key difference has been improved utilisation – passenger load factor this year will be more than five percentage points higher than at the end of 2008.

In terms of the global airline picture, FlightGlobal schedules data shows the first 12 months after the financial collapse as the only year in which airlines pulled back capacity. Airlines cut global seat capacity 2% across the 12 months ended September 2009.

Airlines were back in growth the following year, surpassing previous levels of global capacity in the following year – at least in terms of seats and ASKs, though not flights. This illustrates the increased focus on utilisation and improving load factors.

For some, the impact of the financial crisis resulted in a delayed impact. Airlines actually lifted capacity to Greece, which suffered so badly at the hands of the ensuing eurozone crisis in the year immediately after the Lehman Brothers collapse. But Greek capacity stalled and subsequently slumped over the next four years – and it was not until the 12 months ending September 2015 that capacity sustainably passed 2008 levels.

Ever-expanding low-cost carriers – both in size and geographic penetration – have driven much of this capacity. FlightGlobal schedules data shows the extent to which the budget sector has driven the last decade of growth. While mainline carriers still comprise the majority of seats, low-cost carriers have more than doubled the number of seats they have in the market since the start of the financial crisis. 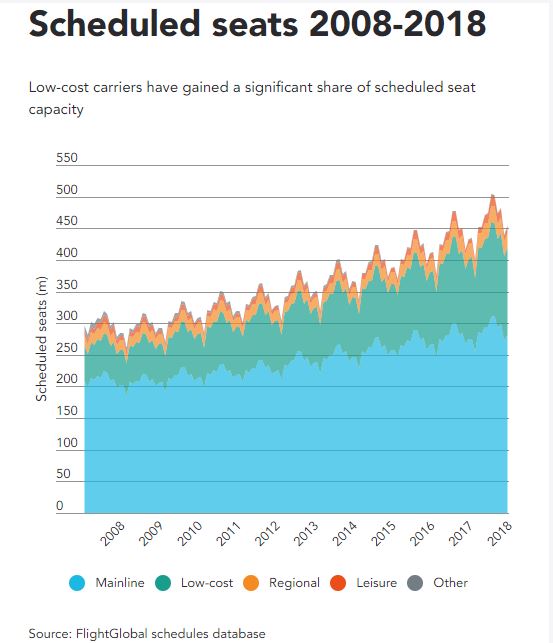 This is particularly evident within the European short-haul market. Here, perhaps more than any other region, low-cost carriers have driven the growth. Peak season seats on intra-European routes have increased almost 50% since summer 2008, the vast majority of which having been added by Europe's low-cost operators.

That is also behind the notable spike in seasonality over the past decade among intra-European capacity. While there has been an increase of almost 35 million monthly seats during the summer peak on European routes, this increase falls to around 25 million during the winter months. This, together with the better year-round yields, illustrates why Europe's low-cost carriers are keen to expand their foothold in non-leisure markets. 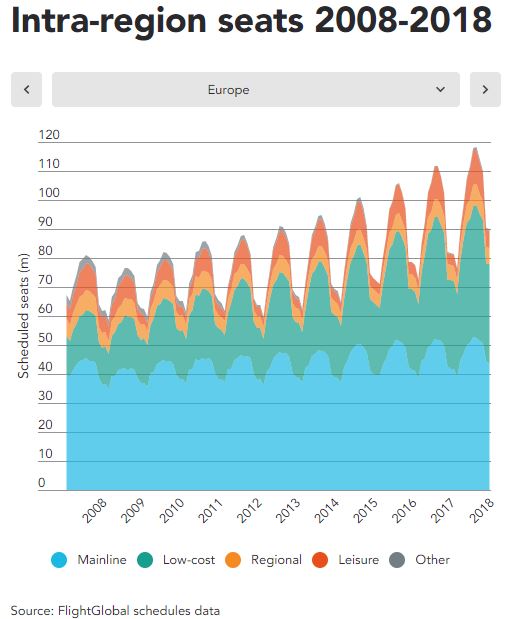 A look at seat capacity within the North American market illustrates the extent to which capacity was kept in check by mainline carriers during the years of consolidation. Seat capacity among the majors, on intra-North American flights, only moved above 2008 levels this year – in part reflecting United Airlines' more expansive strategy. 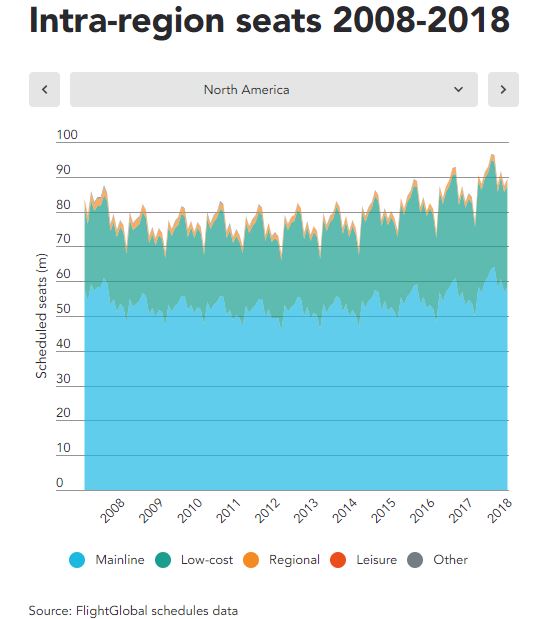 The most startling growth in capacity has been driven from Asia-Pacific. Seat capacity within the region has more than doubled since the financial crisis – with strong growth reported across mainline, low-cost and regional airline sectors.

The growth in Asian capacity – and in particular China – is even more evident in the development of long-haul capacity over the past decade. Airlines have trebled the number of seats since 2008 on long-haul routes from China. That is by a distance the sharpest growth of all countries during that period – and puts it behind only the USA and the UK in terms of the biggest long-haul markets in terms of seat capacity. 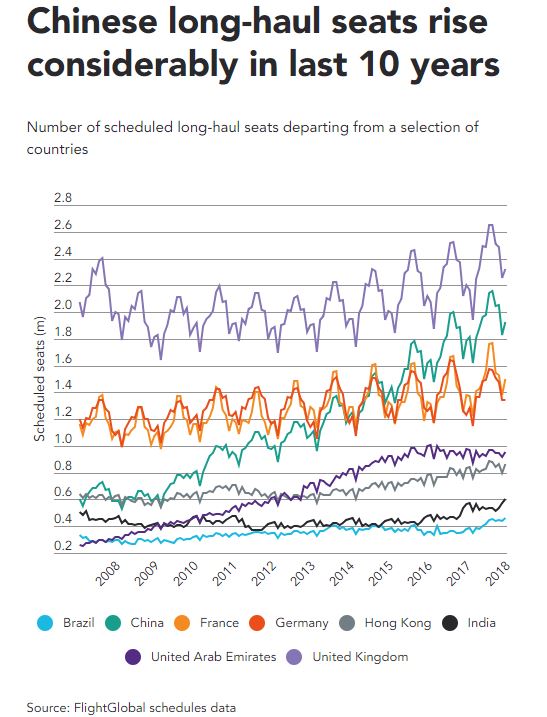 Airlines have lifted long-haul seat capacity from the UAE – even when excluding routes to Europe and Southeast Asia – at the second-fastest rate over the past 10 years. This reflects the rapid expansion of the big three Gulf carriers in particular. But more recent challenges at these carriers and some markets for these operators – notably the USA – have caused that growth rate to plateau in the past two years.