The chairman of Japan Airlines has warned that plans to expand to expand Tokyo's two international airports will not be sufficient for traffic growth in the coming years, and expressed concern about a shortage of slots.

All Nippon Airways meanwhile switched some of its orders for the Airbus A321neo to the smaller A320neo variant. It will also manage its domestic fleet pending the arrival of the Mitsubishi MRJ in mid-2020 through additional orders for Bombardier Q400s and by extending the life of its Boeing 737-500s.

ANA has switched four of its orders for A321neos to the smaller A320neo variant.

The airline's parent company, ANA Holdings, says in a stock exchange statement that the change was approved at a 23 June board meeting, and will now see it take a total of 11 A320neos and 19 A321neos out to 2023.

It adds that the change will allow it to "consolidate aircraft type and to take the company's future business plans into account".

JAL warns that plans to expand capacity at Tokyo's two international airports will be insufficient to handle the growth in traffic expected by 2020.

The Japanese government has proposed measures to increase terminal capacity at Tokyo Haneda, while Tokyo Narita airport is working with the community around the airport to loosen some of its operating restrictions to open up more evening slots.

But JAL chairman Masaru Onishi is concerned that there will still be a shortage of slots.

"Unfortunately the expansion is not going to be sufficient," says Onishi. "By 2020, we are only going to have 80,000 slots [annually], so it is definitely not sufficient."

He also clarified that the 80,000 slot figure was to be divided equally at Haneda and Narita.

JAL expects the pace of growth among Japanese low-cost carriers to moderate in the coming years, but there will still be opportunities to expand on short-haul services.

Onishi tells FlightGlobal he doesn’t think "the low-cost carriers can grow and prosper as they did before, however they still have room to grow up, for example on the short domestic flights".

Onishi has no plans to launch other LCCs in Japan. "Our first priority is to support Jetstar to expand the business, and we keep doing that," he says.

"I would say, especially in East Asia – Korea, China and Taiwan, and Southeast Asia – I think there is lots of room for them to expand the business."

The company sees the low-cost market as a growth opportunity, with Peach and Vanilla its "two pillars" supporting that.

In April, ANA Holdings boosted its stake in Peach to 67% through a Y30.4 billion ($279 million) deal in which it acquired additional shares from the budget carrier's two other shareholders. It originally held 38.7% of Osaka-based Peach.

As part of its management strategy for the financial years 2016-2020, the group is pursuing efficiencies such as shared facilities, infrastructure and maintenance between the two LCC units.

Shinobe went on to say that ANA believes that it has enough aircraft for its domestic operations, while waiting for the delivery of its first MRJ regional jet in mid-2020.

The group has more Bombardier Q400s on order, and could also extend the life of its Boeing 737-500s in service.

He adds that the incoming MRJ90s will be put on domestic services, replacing some of the Q400s and 737-500s in ANA Wings' fleet.

Asked if ANA is interested in the smaller MRJ70 or the larger MRJ100X, which has yet to be launched, Shinobe would only say that the group is looking at how best to optimise its fleet combination for the 70-120 seat sector.

JETSTAR JAPAN TO OPEN NAGOYA BASE IN 2018

Jetstar Japan will open its third base at Nagoya Chubu Centrair International airport by the northern spring of 2018.

The carrier says a Nagoya base will allow it to add more frequencies on existing routes and launch new ones.

The Nagoya base will take a number of the seven additional Airbus A320s that the carrier says will be delivered in the coming years.

The airport is also the headquarters of the reborn AirAsia Japan, which is expected to launch its first services in the coming months.

A consortium led by Orix, Vinci Corporation, and Kansai Airports has been selected as the preferred bidder for a 42-year concession to operate Kobe airport.

Orix says in a statement that a special purpose vehicle will be formed to operate the airport, with a definitive agreement expected to be signed in October 2017. The concession will commence in April 2018.

The companies did not disclose the terms of the consortium's bid, but local media reports say that it will pay Kobe city Y19.1 billion for the concession.

Kobe airport is built on an artificial island in Osaka bay, in close proximity to Osaka Kansai International and Itami International airports. The three companies say they plan to “integrally manage the three airports".

Mitsubishi Aircraft has frozen the design change to its MRJ regional jet's avionics bay, and has moved on to finalise the configuration of the aircraft's wires.

Programme director Alex Bellamy told FlightGlobal at the Paris air show that the manufacturer expected a jet that incorporates the changes to join its flight-test campaign in the second half of 2018. This aircraft will focus on tests associated with its wiring, such as lightning and high-intensity radio-frequency tests.

A second additional jet could join in flight tests, although the manufacturer is studying whether it could incorporate the changes to an existing FTA instead. A decision will be made in the next three to six months.

The Japanese programme initially started out with four flight-test aircraft, but requires additional jets to join in the tests following a discovery last year of a need to relocate components in the avionics bay so as to comply with certification requirements.

Bellamy goes on to say the MRJ has conducted a series of significant tests such as flutter tests and flight load survey, and no big surprises have emerged. The aircraft has demonstrated a dispatch reliability of 98% since its first flight, and will start on engine system tests as well as runway performance tests in the coming months. 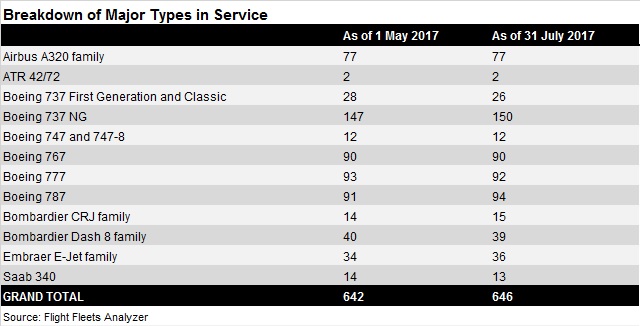