Analysis of LATAM's capacity in this segment in April to June – the latest available data – shows the airline is growing available seat kilometres on routes outside South America for the first time since 2014.

The Oneworld carrier has said it plans to grow international capacity by 6% to 8% in 2018. It has already kicked off the new year with flights to San Jose in Costa Rica, adding the Central American country to its network with service from Lima.

Later this year, it will launch service to Boston, Las Vegas, Lisbon, Rome and Tel Aviv. Several of the new destinations are noteworthy – Tel Aviv will be LATAM's first destination in the Middle East, while Lisbon will expand LATAM's presence to a new country in Europe. The airline's planned Boston and Las Vegas service from Sao Paulo Guarulhos will also create the first nonstop links between Brazil and the two US cities.

LATAM is also adding new flights to existing international destinations within its network. For example, it is beginning service to Mendoza and Tucuman in Argentina from Sao Paulo in the coming months.

Including the new international routes, LATAM is launching about two dozen new routes in 2018. 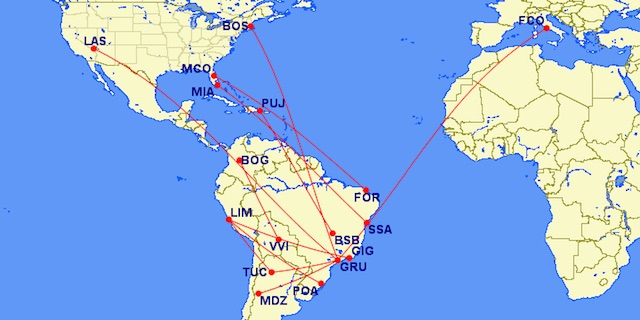 International demand is returning to Latin America, as Brazil continues to emerge from a years-long recession that had previously crippled overseas travel. Most of the new international routes originating from South America will be from Brazil, FlightGlobal schedules data shows.

"Brazil's international flights are doing very well... because the [Brazilian] real has appreciated," LATAM chief executive Enrique Cueto told FlightGlobal in 2017. "Most of the passengers we had in that market three years ago were Brazilian, so when we had the recession the industry was very aggressive in reducing capacity."

Cueto's remarks have been echoed by other airlines in Brazil, even though they have a much smaller international network compared with LATAM.

Azul, whose small international network predominantly comprises flights to the USA, plans to further boost its network this year from Brazil's northeast. It will add flights from Recife to Fort Lauderdale later this year, complementing its existing Fort Lauderdale service from Belem and Viracopos-Campinas. Within South America, Azul will welcome Cordoba and Rosario in Argentina to its network, also with nonstop service from its hub at Recife.

"With the expansion of our northeast hub we will increase the number of people travelling between Brazil, Argentina and the US, encouraging business and tourism," says Azul chief executive John Rodgerson.

Brazil's northeast is also where Gol plans to grow in 2018, although the airline is not launching international flights there for now. Rather, it will open a joint hub in Fortaleza with partners Air France and KLM, coinciding with the two European airlines' plans for service to the city, which will begin in May.

Gol has said it plans to increase its domestic network to and from Fortaleza to connect with the new international routes offered by its partners, and expects to offer 50 flights to and from the city, up from 38 currently.

Further along in 2018, Gol has said it will operate more international flights once it begins taking delivery of Boeing 737 Max aircraft in the third quarter. The airline plans to dedicate a majority of its 737 Max deliveries to international routes, with executives naming Havana, Cancun, Panama City and Lima as possible destinations.

Depending on developments in the regulatory landscape, Latin America's airlines could further grow international service in 2018.

LATAM is awaiting regulatory approvals of proposed joint ventures with partners American Airlines and IAG, while Avianca says it is close to finalising a joint agreement with United Airlines.

Both Latin American carriers have expressed desire to add new international service with their respective partners once the joint ventures are implemented. The LATAM-American joint venture would require US-Brazil open skies to proceed. The bilateral accord is awaiting approval by Brazil's senate, after receiving clearance from the lower house of Brazil's congress.