In the Malaysian Aviation Commission's (MAVCOM) latest issue of traffic rights, Malindo Air's receipt of rights for 10 new routes was far in excess of rivals.

AirAsia received rights for two new routes, while AirAsia X had just one. Of Malindo's 10 new approved services, half were to China, a clear statement as to where it sees future growth.

The rest of the new routes approved are effective from November. They include: four-times weekly Kuala Lumpur-Bangkok Don Mueang-Nagoya services, Kuala Lumpur-Jaipur and Melaka-Kota Bahru services; as well as daily Subang-Banda Aceh and Subang-Jambi services.

In MAVCOM's previous rights granting exercise, which took place in July, Malindo was approved to launch thrice-weekly services between Johor Bahru and Wuhan.

Merely receiving rights from the regulator at home does not ensure the route will happen: airlines still need to work with regulators overseas, and also secure airport slots.

FlightMaps Analytics shows that Malindo operates into China and North Asia from four bases: Langkawi, Penang, Kuala Lumpur and Kota Kinabalu. Between them, Malindo serves 11 destinations in China, as well as Hong Kong and Taipei. 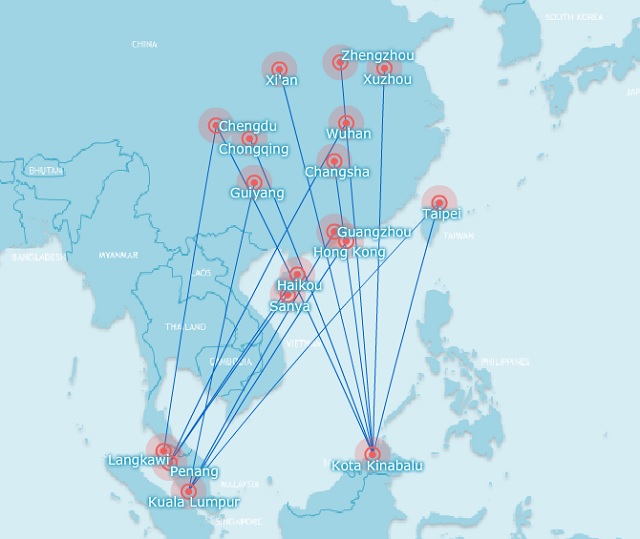 Shukor Yusof, founder of aviation advisory firm Endau Analytics, tells FlightGlobal that there is reasoning behind Malindo's selection of bases for its operations into China.

"Places like Langkawi, Penang, Kuala Lumpur and Kota Kinabalu have a strong ethnic Chinese presence… The Malaysian government has also been strongly promoting eco-tourism in the Eastern states of Sabah and Sarawak. Geographically, Kota Kinabalu is also nearer to the Chinese mainland than the capital city of Kuala Lumpur."

Speaking to FlightGlobal in March, Malindo’s general manager of commercial strategy Saravanan Ramasamy said that China is an important growth area for the carrier: “Everyone is jumping on the [China] bandwagon. Why? Demand is there and infrastructure is abundant. We believe we are putting in the right capacity.”

Capstats, based on FlightGlobal schedules data, shows that the carrier's ASKs into China have grown nearly fourfold since it launched Penang-Sanya services in January 2016. As of August, Malindo has operated 251 million ASKs from Malaysia into China.

By the end of 2017, Malindo's ASKs into India could hit 1.65 billion, while those into China could reach 376 million. 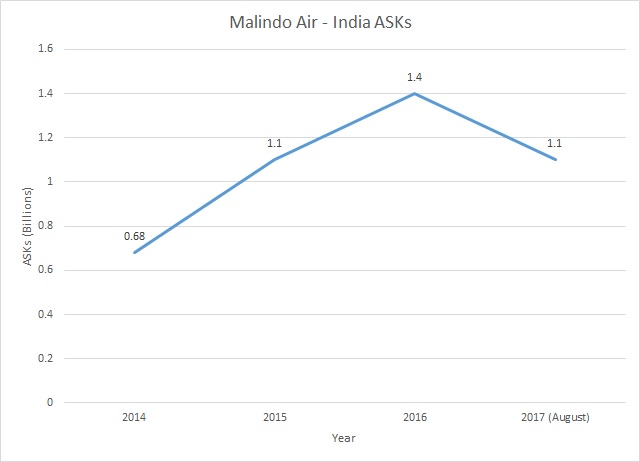 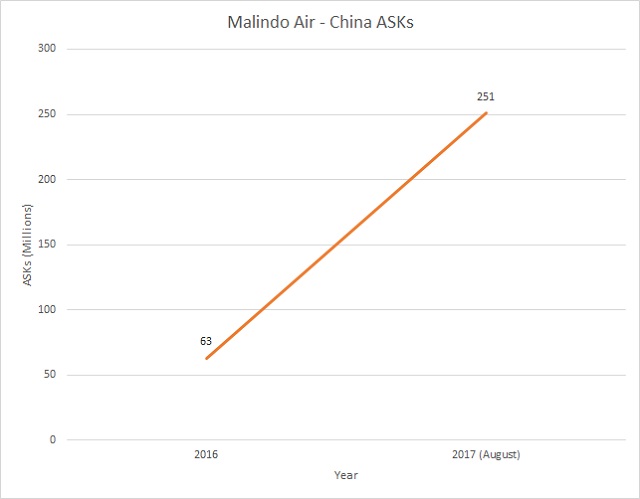 Like its fellow Malaysian rivals, AirAsia and Malaysia Airlines, Malindo also appears to be targeting second and third tier Chinese cities as avenues for growth.

"[Malindo's expansion plan into China] is not a surprise at all. Everyone wants to exploit the growth of outbound market from China… There is a sufficient reservoir of Chinese travellers and [the growth] runs hand-in-hand with recent and upcoming Chinese investments in Malaysia," Shukor elaborates.

He adds that Beijing has also been investing in airports at secondary cities, as part of the "one belt, one road" development initiative. Moreover, good slots are fast becoming a luxury at most airports in tier one cities due to their fast-saturation levels.

"You’ve got the current Chinese government saying that 4% of people in China have got a passport. They’ve got a target that within 10 years, 12% of the population will have a passport. That’s 150 million more people who will start travelling overseas," said Malaysia Airlines chief executive Peter Bellew in November 2016.

Shukor, however, warns that Malindo has some catching up to do with its rivals that have already done early groundwork and laid plans to capitalise on the booming Chinese market.

Malaysia Airlines, for starters, announced its expansion plans into China as early as November 2016, stating that it will launch 11 new routes into the mainland by end-2017 – a figure which represents the most number of new routes launched within a period in the carrier's history.

The majority of Malaysia Airlines' new China routes are also to high-growth tier two cities such as Chengdu, Chongqing, Hangzhou and Tianjin.

Capstats shows that in 2016, ASKs between Malaysia and China stood at 8.2 billion, 20.6% more than the year before. As of August, that figure stands at 7.1 billion and could reach 10.6 billion by the year-end.

Meanwhile, AirAsia and long-haul sister AirAsia X have grown their market share between the two countries. FlightGlobal schedules data indicate that in the current month, AirAsia has a market share of 31.9% of China-bound capacity and AirAsia X has 23.4%. Malaysia Airlines comes in third place with 14.5%. Malindo lags behind in seventh with 3.5%.

More pertinently, AirAsia entered a memorandum of understanding in May with two Chinese partners to set up a low-cost carrier in Zhengzhou – AirAsia China. The partners are China Everbright Group – a government-backed financial services conglomerate that is a major shareholder in China Aircraft Leasing – and the Henan Government Working Group.

Besides establishing AirAsia China, the unit will also invest in aviation infrastructure, including a dedicated low-cost terminal at Zhengzhou airport, an MRO facility and a training academy.

With its rivals making their expansion plans known and acting on them, Malindo needs to do the same – and fast – or it risks being a bystander to the rise of one of Southeast Asia's fastest booming air travel markets.