Thirty years after its transition from one of the UK’s last aircraft builders into a unit of Bombardier, the one-time Shorts factory in Belfast may be about to reinvent itself again. The flagship of the Canadian firm’s aerostructures business – which includes facilities in Canada, Mexico, Morocco and Wichita – Belfast is Airbus’s only third-party wing supplier, after Toulouse took over the ailing CSeries programme from Bombardier in 2018. Now, a decline in Bombardier’s commercial aircraft activities means the European airframer could become even more pivotal to Belfast’s future.

Shorts was a pioneer in composite structures and continued to develop that expertise after Bombardier’s acquisition of the company in 1989. Bombardier Aerostructures & Engineering Services (BAES) still owns the intellectual property rights to the innovative technology behind the composite wing for what is now the A220, including a patented resin transfer-injection process. BAES chief operating officer Michael Ryan hopes to exploit that unique 40-year knowhow to engineer a role in a future Airbus composite wing programme. “We have been very clear – this is an opportunity we need to grab,” he says.

Belfast’s ability to seize that chance largely depends on the outcome of the UK’s negotiations to leave the European Union. While the border between both parts of Ireland has been central to the Brexit debate, for Bombardier a much bigger issue is the UK’s chances of remaining a key part of the Airbus project. While much bigger in-house operations in Filton and Broughton produce many more Airbus wings than Belfast, Ryan believes that Bombardier’s composite expertise could help the UK’s case for remaining the centre of excellence for any future, carbonfibre Airbus wing.

As Prime Minister Theresa May was flying to Brexit meetings with European leaders either side of Christmas, Ryan was carrying out his own shuttle diplomacy, putting Belfast’s case to Airbus bosses in Toulouse. He and other representatives of UK aerospace are up against not just Airbus operations in France and Germany, but politicians in those countries too. They have long harboured ambitions for their national industries to take on responsibility for wing design and production on a future Airbus programme, and a messy or no-deal Brexit would boost their cause.

Bombardier is not the only UK first-tier keen to work on a new Airbus wing – GKN, a long-time Airbus partner, is involved with the airframer’s “Wing of Tomorrow” studies. However, several Northern Irish companies are working on research projects too, and Ryan believes Belfast has a strong case if or when Airbus moves to the next stage. He told journalists in November: “If an opportunity comes on a new wing, Airbus would have to decide: ‘Do we do it in-house or go to a third-party provider?’ We would want to be a part of that, making a pitch to be involved in a new wing.”

Also boosting Belfast’s position is the fact that the factory was a supplier to Airbus long before the European company acquired the CSeries programme, building, among other items, nacelles for International Aero Engines-powered original A320 family aircraft. In 2017, Airbus also awarded Bombardier a fresh contract to build a thrust reverser for “a new, innovative nacelle” for Pratt & Whitney PW1100G-powered A320neos. This followed Airbus’s decision to produce its own nacelle for the engine in competition with former monopoly supplier Collins Aerospace. 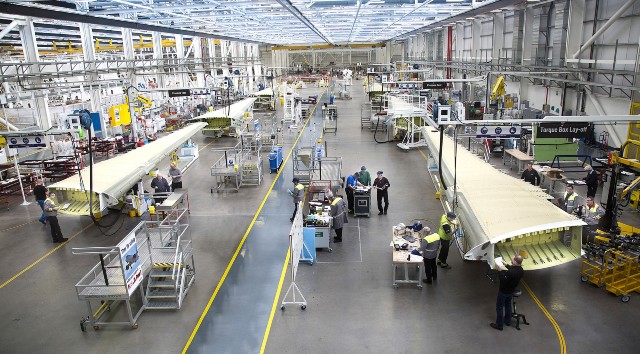 Bombardier’s thriving business jet activities also continue to boost Belfast’s prospects. The plant manufactures the composite horizontal stabiliser and other smaller components for the Global 7500, the airframer’s flagship business jet, production of which is beginning to ramp up after the type received certification in 2018. Belfast is also responsible for the forward fuselage, engine nacelles and stabliliser for smaller Globals, as well as the centre fuselage for the super-midsize Challenger 350, and the centre fuselage and engine nacelles for the larger Challenger 650.

However, wing production is where the real value is for Bombardier. Belfast began really developing its expertise in composite structures in the 1990s, including for the Global Express business jet. Boosted by European and UK research funding, the factory then began working with resin-injection, an emerging technology that found a business case when Bombardier launched the CSeries in 2008. The Canadian company committed to what is still Northern Ireland’s largest-ever inward investment of £520 million ($800 million at the time) to build the CSeries wing facility, which opened in 2011.

However, problems have not gone away for the Belfast plant, which has endured a number of crises since the UK government – the majority shareholder at the time – paid out £780 million (about $2 billion today) in 1989 to write off debts and inject fresh capital into the business ahead of its sale to Bombardier. Late in 2018, Bombardier announced plans to lay off 490 of the just under 4,000 staff at the plant as part of a wider initiative to restructure the manufacturer’s activities. BAES said the Belfast redundancies would “help ensure our long-term competitiveness”.

Bombardier’s recent decision to offload the Q400 Dash 8 programme to the parent company of fellow Canadian manufacturer Viking – which had earlier bought the rights to Bombardier’s specialist firefighting aircraft as well as legacy de Havilland Canada products including the Twin Otter – will have a marginal effect on Belfast. The only products the Northern Irish facility builds for the turboprop are wing-mounted flight components. Its stake in the once strong-selling but now struggling CRJ family – which Bombardier may also be preparing to offload – is more substantial. It makes the centre fuselage for the regional airliner family.

The Belfast plant also faces competition from its own sister businesses – factories in Mexico and Morocco in particular, where labour rates are lower and there is constant pressure from governments to “push up the value chain”. Aerostructures work done at the more commodity end of the supply chain is always the most vulnerable, which is why the success of the A220 under Airbus is critical for Bombardier in Belfast and much of the Northern Ireland aerospace community. So too are Ryan’s efforts to deepen the relationship with Toulouse through future contracts, such as wing design and production, which will deliver a healthy return.