Efforts to integrate low-cost carrier Vanilla Air with its more successful stablemate, Peach Aviation, due to begin later this year, demonstrate that low-cost carriers in Japan are no passing fad.

ANA Holdings announced in March that it would merge the two budget carriers under the Peach brand, and underlined its longer-term plans to make it a stronger player in Japan and beyond. The integration of the two carriers is expected to be completed in 2019.

"Following the integration, the airline will serve as a strong foundation for further fleet growth and network expansions from Osaka Kansai airport, as well as from Tokyo Narita airport. In addition, the airline will stimulate potential demand in Japan and from abroad through attractive service, various innovations and fares that exceed expectations," the All Nippon Airways parent company said in a statement.

The merger of Vanilla and Peach appeared inevitable at some point – especially after ANA moved to boost its holding in Osaka-based Peach to 67% in April 2017, making it a subsidiary of the airline group.

Peach was the latecomer to the Japanese budget market which, despite a delayed start, sprung into life in 2012 with the establishment of Japan Airlines and Qantas-backed Jetstar Japan, the first incarnation of AirAsia Japan and Spring Airlines Japan.

But with most of those carriers duking it out from Tokyo Narita, Peach was the first to turn a profit by focusing its operations on Osaka Kansai. It also placed a major focus on the international market, and set about building a brand based on the concept of "Japanese cute and cool".

Vanilla emerged in December 2013 as a wholly owned subsidiary of ANA after its AirAsia Japan joint venture with AirAsia ended in October of that year. Based at Tokyo Narita, the airline established a small network mostly focused on international routes that targeted overseas travellers.

Unlike Jetstar Japan and JAL, the two budget brands did their best to distance themselves from ANA, with no codesharing or interlining between them. There was also no group planning of routes and networks, with apparent control resting on each carrier's management team.

It appears that the enlarged Peach will continue to operate in the same way. ANA says it will "maintain the strategic independence of the integrated LCC, and position the airline as an important pillar for greater profits and new opportunities for future expansion, and become the leading LCC in Asia".

With ANA placing a greater emphasis on the budget travel market, the merger of Peach and Vanilla always had an air of inevitability, given their similarities in fleet and complementary networks.

Both carriers operate Airbus A320s in similar configurations, with a combined fleet of 35 aircraft in service and 18 on order.

The two carriers have also built their networks focused on international routes, in particular to Taiwan. FlightMaps Analytics shows that they only overlap on four services – Tokyo-Osaka, and Taipei to Osaka, Tokyo and Okinawa. 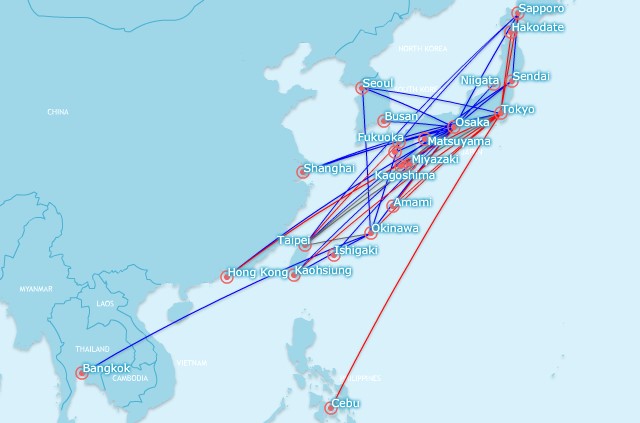 Peach has had the upper hand in the international market, and is the only LCC to operate from Tokyo Haneda airport. On its part, Vanilla Air has boldly used fifth-freedom rights to enter the Taipei-Ho Chi Minh City market, while its limited domestic network provides strong connections for passengers travelling to strong tourist cities.

The merger will also give it scale against its main competitor, Jetstar Japan. After facing some early regulatory headaches that slowed its growth, the JAL and Qantas backed budget carrier reached profitability in the 2016, and has since managed to grow its fleet to 22 A320s.

That has put them more in competition with Taiwanese, South Korean and Southeast Asian budget carriers such as Tigerair Taiwan, Eastar Jet and Scoot, through which they have still managed to make profits.

ANA has made clear that the focus will remain on international expansion post merger, complete with plans to expand into medium-haul routes by the end of March 2020. It says that flying on longer routes will allow it to "aggressively incorporate the growing travel demand in Asia", and support a government goal of boosting inbound tourism.

The timing suggests that Peach will likely add Airbus A321LRs to its fleet. Previously, the management at Vanilla Air had expressed an interest in A321LRs, which could be used to launch services right through Southeast Asia, and even as far away as northern Australia.

For now, however, the airline has given little indication of what medium-haul routes it is looking to serve.

MORE ROOM AT THE INN?

While the merger will effectively remove a competitor, the budget market in Japan is still relatively immature. FlightGlobal schedules show that, by capacity, LCCs account for around 7% of the scheduled seats operated in the domestic market – a far cry from the 30-50% penetration seen in more mature markets elsewhere in the world. Even with the abundance of high-speed rail and dominance of ANA and JAL in the domestic market, some still see strong potential for future growth in the domestic market.

But it is not without its challenges – the biggest apparently from regulators.

AirAsia Japan, which relaunched in October 2017, has been unable to scale up its operations from a single route, seemingly as a result of regulators not allowing it onto other routes. AirAsia group chief executive Tony Fernandes aired apparent frustration at the situation in a recent Facebook post, saying: "Just need regulators to give us a few more routes and we will grow fast."

This is hardly surprising, however, given that Japan's regulators have subjected all new LCCs to a high degree of scrutiny. Peach and Vanilla Air have previously had trouble recruiting and retaining A320-rated pilots in a country that has an overwhelmingly Boeing-manufactured fleet, although that has been alleviated through changes in government policy and adopting cadet schemes.

The only other LCC, Spring Airlines Japan, appears to have achieved little growth in the three years it has been operating. FlightGlobal schedules show that it operates only one domestic route (Narita-Saga) and a handful of services to China, largely supporting major shareholder Spring Airlines.

Although the other operators are on a slow trajectory, some changes could still be in the air. In early May, a senior Japan Airlines executive told Bloomberg that the carrier was analysing the possibility of launching a new low-cost carrier. No details were released, but it could see the entry of a new brand into the market - which would also have implications for JAL's shareholding in Jetstar Japan.

Nonetheless, for now the enlarged Peach in a strong position in a market that could well grow more in the coming years.