ANALYSIS: Rolls-Royce prepares for future with UltraFan and electric power

Rolls-Royce arrives at this year’s Paris air show with the immediate focus on ramping up production of in-service engines and curing the disruption still being felt by operators of Boeing 787s powered by the Trent 1000.

Development activities are continuing in the background, of course, but are at a relatively early stage in the cycle. As the manufacturer’s chief customer officer Dominic Horwood points out, when the Trent 7000 engine entered service late last year with the Airbus A330neo, it marked “the end of that wave of Trent development”.

R-R’s next commercial engine programme is the UltraFan, a geared-fan powerplant currently sized for future widebody applications that promises a 10% fuel-burn improvement over the Trent XWB. As Horwood says, UltraFan is the “expression of our future in large engines”. 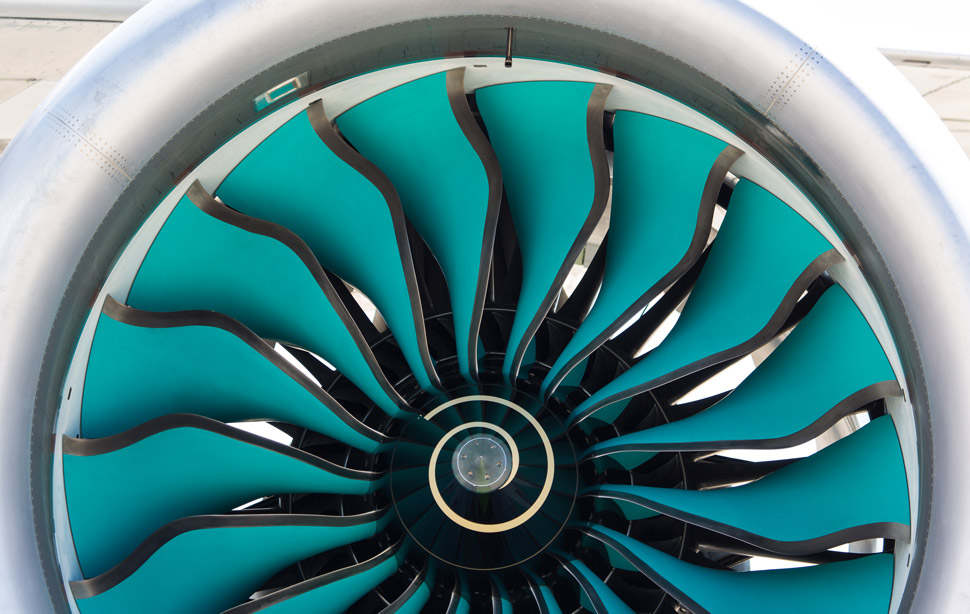 Although UltraFan is not scheduled to enter service until the latter half of next decade, R-R is making good progress with the various technological building blocks that will come together to form the new engine, explains Phil Curnock, chief engineer, civil aerospace future programmes.

Arguably the most radical part of the new engine – or at least a radical departure from R-R’s traditional architecture – is a power gearbox (PGB), currently in test and development at the firm’s site in Dahlewitz, near Berlin.

Five of an eventual seven or eight test articles have been built so far, accumulating 250h of run time on attitude and altitude rigs, says Curnock. A sixth unit, a more production-representative example, is currently in build; evaluation work on the component is scheduled to begin later in the summer.

Sized for an 80,000lb-thrust (356kN) powerplant, the PGB has a ring gear with an 80cm (31in) diameter and has already taken records as the most powerful aerospace gearbox ever run.

Other key systems for the new powerplant are a blizzard of acronyms – chief them being ALPS and ALECSys. The former – the Advanced Low Pressure System – is a fan featuring composite blades with a titanium leading edge (CTi) rather than R-R’s traditional hollow titanium parts, as well as a fan case and annulus filters also made from composite material.

Attached to a Trent 1000 donor engine, the CTi fan first flew in 2014 aboard the company’s Boeing 747 testbed. Since then, R-R has continued to amass data on ALPS, including back-to-back tests against a metal fan, and icing tests carried out in Manitoba. Whole system trials have also recently been completed, says Curnock.

Another recent evaluation saw R-R remove, damage and then re-insert one fan blade in order to check vibration levels. The results achieved what Curnock describes as an engineer’s ideal in that there were “no surprises”. Low-speed tests of the ALPS design were also recently conducted using an 88cm-diameter scaled, metallic version. “Performance, operability and noise testing results have exceeded expectations,” R-R says.

UltraFan is likely to enter service with the CTi fan, but as Curnock says, that design must prove better than a metallic equivalent, and its selection will mostly be driven by how big the engine is. “It is very difficult to beat hollow titanium capability. The break point where we introduce [composite] is interesting: it has to trade its way on,” he says. “The larger [the engine] gets the more likely I am to use it.” 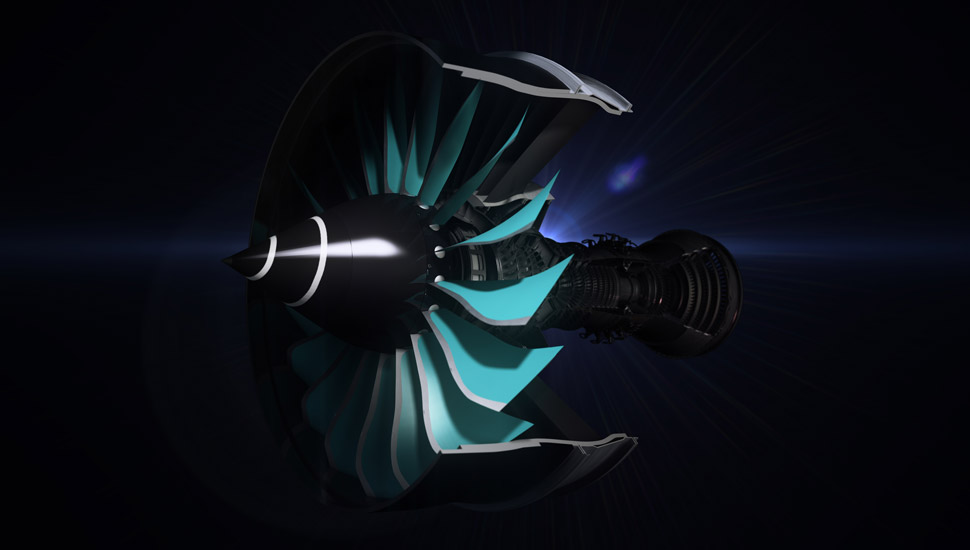 ALECSys, meanwhile, is R-R’s Advanced Low Emissions Combustion System – a new learn-burn combustor that allows the engine to be fine-tuned during different phases of flight. Ground tests of the system were carried out last year using a modified Trent 1000. “Predictions were pretty much as expected,” says Curnock. Flight tests will take place over the coming years using the same Trent 1000.

Another key building block for UltraFan is the Advance3 core, which first ran in 2017. It features components made from new materials including ceramic matrix composites and super nickel alloys for better high-temperature performance. R-R has completed the first phase of tests on the Advance3 core, which has been attached to a Trent XWB fan system and Trent 1000 low-pressure turbine to form the demonstrator engine.

This initial phase included runs at maximum power, beginning in 2018.

A “more aggressive” test period is taking place this year, which incorporates X-ray, functional performance, indoor noise, core water ingestion and operability trials. “It has been the most successful demonstrator test that we have ever done,” says Curnock, noting that all engine starts were successful.

All this activity is building up to a major milestone for the programme when UltraFan is run for the first time – an event currently scheduled for 2021. “I have really got all the building blocks now and that’s what we are doing,” says Curnock.

“We are completing the design and analysis phase this year. Some of the long-lead items are already in build.” Next year, he says, will be entirely focussed on manufacturing and assembly work.

R-R has a clear near-term focus on the gas turbine and further optimisation of that technology. Curnock notes that the company does not “believe that electric is going to take over powering the very largest aircraft”. However, that does not mean that potential applications for new power sources are being ignored.

While agreeing with Curnock’s analysis, Orr still believes electric power can play an “incremental and disruptive” role, even on larger passenger jets. That does not mean replacing traditional turbofans with electric motors but using the technology to enable efficiency gains – “making gas turbines more electrical”.

For example, R-R has been testing, on an Adour powerplant, the use of electrical energy to start the engine rather than bleed air. Power for the process is drawn from stored energy produced by a generator attached to the high-pressure shaft.

A second phase of testing will begin shortly, evaluating whether a second generator can be added to the low-pressure shaft. “It lets you play with the amount of electrical power you take from either shaft during the flight cycle,” says Orr.

The energy generated could be used to reduce the amount of bleed air taken from the engines to run the air conditioning, and ­potentially to power items like the oil or hydraulic pumps, which are currently run off the engine’s accessory gearbox. Ultimately, as electricity is used to run more systems, it could remove the need for the accessory gearbox entirely, he says, which would offer additional drag-reduction benefits on smaller business jet engines due to its location.

“If we are taking the starter generator off the accessory gearbox and leaving oil pumps on there, are we really making the most of that technology development? So, can we utilise that technology to get us into the more-electric sphere?” he says.

Other systems such as de-icing or actuators could also be powered by the stored electricity, says Orr.

While more-electric is the strategy for large engines, down the size range, hybrid or full-electric architectures are being developed and tested. R-R is already working with Airbus on the E-Fan X technology demonstrator, which replaces one of the four turbofan engines on a BAe 146 regional jet with a 2MW electric motor powered via an AE 2100 turboshaft ­engine located in the fuselage.

This effort should help R-R better understand whether the technology is suitable for regional aircraft applications and “whether or not you can develop the electrical technology to make that feasible in terms of cost and weight and cost per passenger”, says Orr.

Two other projects are helping R-R to hone its electric capabilities in the air. At the more traditional end, it has partnered with motor specialist YASA and Electroflight on the ACCEL programme, which seeks to break the world speed record for an all-electric aircraft. Flight testing of the modified Nemesis NXT racer is due to begin next year.

Although the headlines will focus on whether or not the project achieves its speed goal, Orr says while it would be “nice” to take the record, that is not the principal aim for the company: “It’s all about the learning in terms of integration – the energy storage system, the battery management system… to make sure that we understand where need to get to in order to make this a viable product proposition.”

Besides a better understanding of the hardware, the ACCEL is also allowing R-R to “work a bit like a start-up”, while still maintaining the “governance and safety aspects” that the aerospace industry demands.

Meanwhile, with the market for urban air mobility (UAM) vehicles beginning to take off, R-R is eyeing a solution for this segment, too. Ground tests of a 1MW hybrid propulsion system with an M250 helicopter engine at is core are under way at its Indianapolis site in the USA. ­

Currently using off-the-shelf technologies, Orr sees the system being refined using more bespoke components. It will eventually be flight tested, although he stresses that the propulsion system is “platform agnostic” and, as yet, there is no airframe on which to put it.

But Orr says the challenge for the wider industry is not simply one of technology – UAM designs that are “technically feasible” – but to ensure that everyone plays by the same certification standards, while also not strangling development. “We all have a responsibility to make sure that everyone is safe and therefore we all have to – as a business, as an industry – understand what it takes to make sure that this new technology as it comes into new operating spaces is safe,” he says.

The manufacturer also continues to refine its maintenance and support organisations, including bolstering its computing and ­analytics capabilities to deal with the 30TB of data produced by its engines each year. This includes the creation of a “digital twin” for each engine produced, allowing the employment of predictive analytics on components. In addition, R-R is developing a suite of apps under its Intelligent Insights brand, to allow carriers to better optimise aspects of engine performance or operation.

Indeed, in presentation after presentation during a two-day briefing ahead of the Paris air show, executives emphasised the convergence of three strands – product, services and digital – which are combining under R-R’s IntelligentEngine concept.

This envisages powerplants that are “connected, comprehending and contextually aware” – the final point relating to engines that can use data about where they are operating, and how they are being used.

And while the connected element of those three Cs is obvious, for R-R, “comprehending” means “an engine which knows what’s happening to itself and which can take actions based on its own experiences and those of other engines in the fleet”.

R-R’s investment is not confined to metal and carbonfibre or batteries and software, however. The company is also pouring a not inconsiderable sum into concrete. Taking shape at the manufacturer’s Derby, UK campus is a huge new structure – “bigger than a Premiership football pitch” is the boast – which will become testbed 80, a ­facility that will be dedicated solely to demonstrator engines.

Commissioning of testbed 80 will begin in 2020, says Gareth Hedicker, director of development and experimental engineering at R-R. It features 1.7m-thick concrete walls, which will enable “more efficient” X-ray testing, he says, meaning evacuation of the immediate area will not be required.

In an uncontained environment, “the equipment we use could give you a chest X-ray six miles away”, says Hedicker.