FlightGlobal schedules data shows that the seat count declined by 6.9% between 2015 and 2017, compared with 12.7% growth between 2013 and 2015. That occurred despite the addition of two carriers onto the market – Jetstar Asia and Scoot – while United Airlines withdrew. The other carriers that fly between the two countries are All Nippon Airways, Delta Air Lines, Japan Airlines, SilkAir, and Singapore Airlines.

The decline in seat capacity seems to correlate with slow growth in the market between the two countries. Singapore Tourism Board visitor arrivals data shows that arrivals from Japan were up by 1.2% to 793,000 in 2017, despite the value of bilateral trade rising by 18% over the same year to Y3.5 trillion ($32 billion). Japan National Tourism Organisation also indicates that arrivals from Singapore in 2017 saw a 1.4% year-on-year increase, to 404,100. 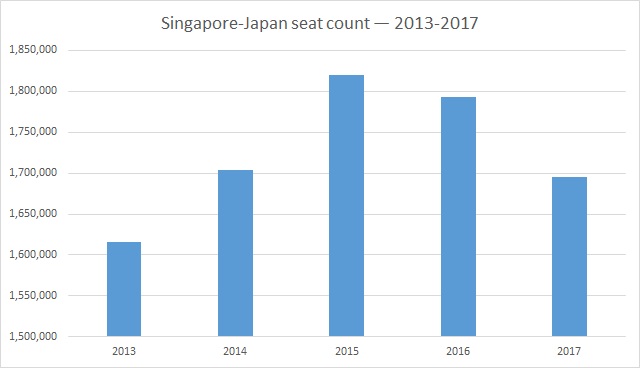 The decline started in 2015, as United cut capacity by 58% on the Tokyo-Singapore route by downgauging aircraft. Delta followed with a 19% seat reduction as it replaced 777-200s with 767-300ERs.

Between 2016 and 2017, capacity fell further as SIA downgauged from Airbus A380s to 777-300ERs on the Singapore-Tokyo Narita-Los Angeles route. It was also during this time that United ceased Japan-Singapore services by starting nonstop flights between Singapore and the United States.

ANA has varied the capacity it deploys on the Singapore route in the past few years. In 2016 it replaced the 787-8s with 777-300ERs and 787-9s, but in 2017 it returned to an all-787 operation, resulting in a 4.8% decline in seat capacity. In part, that may have been influenced by its growing US network, where its 777s have been deployed, as well as the influence of United and SIA's nonstop flights between Singapore and the United States.

Despite the changes in capacity, the most seats deployed between Singapore and Japan are in the Tokyo market, with JAL, ANA and SIA all operating to both Narita and Haneda airports, while Delta flies only to Narita. SIA is the only carrier that flies nonstop to Osaka, Fukuoka and Nagoya, while it also operates seasonally to Sapporo. 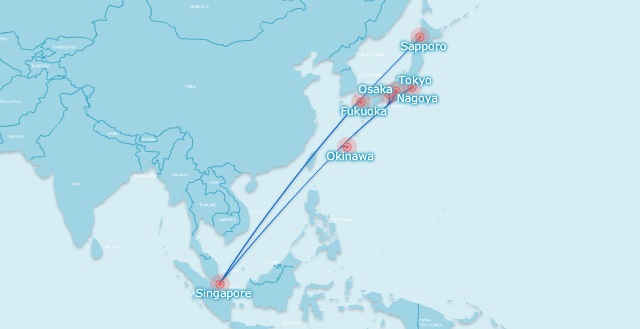 Note: *Singapore-Hiroshima route is missing from the map.

That underlines the SIA group's dominance in the market. FlightGlobal schedules data for June 2018 shows that the mainline carrier alone operates over half of the seats in the market. Adding in regional unit Silk Air and budget carrier Scoot increases this to almost 60% of seats.

While SIA has cut back Tokyo capacity by deploying A350s and 777-300ERs on those routes, it has started adding capacity to routes to other Japanese cities by deploying 337-seat 787-10s to places such as Osaka, replacing smaller 285-seat A330-300s. Fukuoka and Nagoya will be the next Japanese destinations to receive the 787s. The Star Alliance carrier is set to further increase Osaka capacity during the winter schedule by deploying Airbus A380s on one of the twice-daily flights it operates.

Regional unit SilkAir operates scheduled charters to Okinawa, and the addition of 737 Max 8s to its fleet allowed it to begin Singapore-Hiroshima flights in October 2017.

Budget carrier Scoot, meanwhile, entered the nonstop Singapore-Osaka market last year with the launch of its four-weekly Boeing 787-8 services that continue on to Honolulu.

Perhaps in an effort to distinguish itself from SIA's mainline flights and to pick up on strong demand in Taiwan and Thailand, the majority of Scoot's flights to Japan operate via intermediate stops at Bangkok, Taipei and Kaohsiung. That is despite Japan easily being within the range of the carrier's 787s.

The same cannot be said of the A320s operated by Jetstar Asia. The Singaporean budget carrier flies nonstop to Okinawa in Japan's southern islands, and serves Osaka via intermediate stops in Taiwan and the Philippines.

ANA Group low-cost carriers Peach and Vanilla have previously indicated that they could launch services to Singapore from ANA's southern hub at Okinawa. However, with those two carriers now set to merge during the 2019 fiscal year, it appears that any plans to do so may be put on hold.

The market dynamics, however, could change from 2020 onwards, when Japan Airlines' long-haul LCC starts operations. While it is known that the new airline will operate two 787-8s, JAL has said that it will fly only to destinations in Asia, Europe and the Americas.