With its embracing of open skies, Ecuador has brought about new optimism in an airline industry that is hoping to see changes similar to those witnessed in Argentina over the recent year.

A commitment by Ecuador President Lenin Moreno to an open skies agenda, since he came into power May 2017, has been the driver of fresh hope.

"They now have a more business-friendly agenda," he told FlightGlobal, in a recent interview. "Ecuador was a sleeping market the last few years."

With a population of 16.3 million, Ecuador is nowhere near the size of large Latin American markets like Brazil, Mexico and Colombia. The South American country is also one of the smallest among its peers, with an area size that is slightly smaller than the US state of Nevada, according to the Central Intelligence Agency World Factbook.

But what Ecuador lacks in size, it makes up for in geographic location, point out some observers. Tucked between Colombia and Peru on South America's west coast and straddling the Equator, Ecuador and its tourism attractions could be an appealing destination for airlines.

"There's a perception that Peru is a bigger market," says Viva Air Group chief executive Declan Ryan at Routes Americas in Quito recently. "If the numbers of Ecuador are lower, there's no reason why it should be lower."

Viva Air is in negotiations with Ecuador's government to potentially base a third Viva airline in the country after VivaColombia and Viva Air Peru. Ryan, who is the son of Ryanair founder Tony Ryan, says he was "blown away" by Cotopaxi airport in Latacunga. He believes that the airport, which is served by only TAME, could be a viable alternative to Quito's main airport.

Quito's main airport is about a 50min journey from central Quito, while Cotopaxi is a 1h 30min drive away. But affordable public transportation could make the airport an attractive base for Viva and the price-sensitive customers it likes to attract, says Ryan.

"I think there's a real low-cost opportunity in Ecuador if we get the right airport deal," he tells FlightGlobal. "If you link Colombia, Peru and Ecuador together, it's probably the golden triangle for backpackers."

Ecuador's transport minister Paul Granda Lopez agrees that there are opportunities for new airlines in Ecuador, but was also quick to add during a presentation at Routes Americas that his ministry oversees other modes of transportation.

"We have to find an equilibrium point to not damage the market," Lopez says.

Aside from committing to welcome more foreign airlines into Ecuador, Lopez says the ministry wants to lower operating costs through lower fuel prices and fees, especially at Ecuador's state-owned airports. Seventeen of the country's 21 operational airports are managed by the civil aviation authority, he says.

"We want to improve costs and rates," says Lopez. "We are meeting airlines who want to fly here. Open skies would mean greater connectivity for the country."

The government is in talks to update its bilateral air services agreements, says Andrew O'Brian, chief executive of Quito International airport. He indicates that Ecuador is close to signing an agreement with Canada, and wants to reach an open skies deal with the USA.

"The protectionism is going away," he tells FlightGlobal.

The country's embrace of open skies, which it is extending to all airports except the protected airports on the Galapagos Islands, is a reversal from years of protectionist policy that had favoured state-owned carrier TAME.

Ecuador does not have to look far for an example of how a change in government policy can benefit air traffic growth. Further south, Argentina has seen a significant uptick in international traffic since President Mauricio Macri's government came into power in late 2015, ushering in a new era of openness in foreign airline service.

FlightGlobal schedules data shows that international air traffic to Argentina was mostly growing in the single-digit range annually from 2012 to 2015. In 2016 and 2017, the growth rate climbed to around 12%. 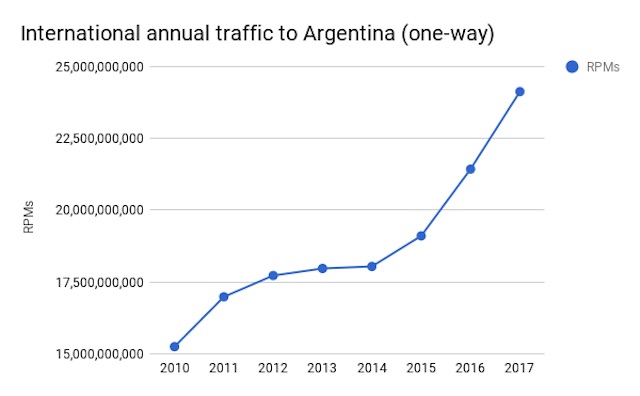 IATA's Cerda says his organisation is hoping for a similar change in Ecuador. "Both governments were very closed," he says. "Now the government in Ecuador is looking at open skies, and stimulating growth at secondary airports like Cuenca."

The efforts are beginning to bear some fruit. Aeromexico will boost frequencies on its route from Mexico City to Quito from 13 April, going to 10 times weekly from daily currently. Brazil's Gol has also signed a memorandum of understanding with Quito airport to develop nonstop service between São Paulo and the Ecuadorian capital.

O'Brian, a Canadian expatriate who has led the airport for about five years – with most of those under the previous administration – says he has witnessed firsthand the changes taking place.