Low-cost operator Jin Air narrowly avoided having its license cancelled by South Korean authorities after it was discovered that the airline had violated local transportation laws. Start-up Air Premia is inching closer to a launch in 2020, after securing funding. At the same time, Seoul restarted the feasibility studies to build a second airport on Jeju island.

Consolidated revenue rose 10% to W1.64 trillion, on the back of stronger cargo and passenger revenues across its major markets.

On a group level, the airline posted a net loss of W4.94 trillion, a 34% year-on-year improvement.

In early September, Asiana appointed Han Chang-soo as its new president and chief executive. He succeeded Kim Soo-cheon, who tendered his resignation from the carrier.

Han was the head of Asiana IDT, the technology unit of its parent company Kumho Asiana Group. Prior to that, he had a long career at Asiana Airlines, including a stint as chief financial officer.

In its outlook, Korean Air expects stronger demand during the third quarter due to South Korean holidays, its joint venture with Delta Air Lines, and the lowering of tensions between North and South Korea.

Net profit was down to W994 million, partially driven by a W6 billion penalty it was forced to pay in June.

Plans to add two more Boeing 737-800s and one 777-200 to its fleet were delayed to the fourth quarter, due to an action by South Korea's transport ministry.

Jin Air came under scrutiny after it was discovered that it had violated local transport laws, by allowing Cho Hyun-min to sit as a director despite holding US citizenship.

A hearing was held in August. This resulted in restrictions to the carrier's ability to launch new routes and register new aircraft, instead of having its operating license cancelled.

The ministry said while it had considered the wider impact on employees, customers, and minority shareholders, it found that cancelling the airline's license would have a broader negative impact. While it acknowledged the measures Jin had undertaken since then, the licensing processes are also being reviewed.

The airline issued 12 million new shares in the IPO, raising gross proceeds of W143 billion. This is lower than its previous projection of W175 billion. Funds raised were earmarked for future investment in facilities and equipment.

Despite the underwhelming IPO response, the airline posted an operating profit of W47.7 billion for the half-year period to 30 June, more than doubling the W20.6 billion for the same period in the previous year.

Revenue over the six months increased 40% year-on-year to W366 billion. No net figure was provided.

Start-up hybrid carrier Air Premia plans to launch services in the first half of 2020, after securing a total of $33 million in capital ahead of starting its license application process.

The capitalisation is now above Seoul's planned minimum of $27 million to license new carriers. Based on that, the company intends to submit its air carrier license application.

Air Premia is planning to secure an additional $56 million in funding once it receives its license.

It is planning to offer economy and premium economy classes and operate on routes six hours and longer. It is also looking to operate a single fleet of Airbus A330neos or Boeing 787-9s.

Seoul has restarted a feasibility study on building a second airport on Jeju island.

The study will relook at the site selection, while also consult with the local residents, said South Korea's transport ministry in July.

The new Jeju airport is expected to handle 25 million passengers annually, with a 3,200m long runway.

In 2015, the South Korean government committed to opening a second airport in 2025, which will operate alongside Jeju International airport. The existing airport has a design capacity of 24.4 million passengers per annum while traffic is expected to hit 45.5 million by 2035.

It has previously said that a new airport will be built between Seogwipo and Seongsan at a cost of W4.1 trillion. Local media indicates that residents of Seongsan questioned the selection process for the site, pointing to a lack of transparency and environmental impact assessment. 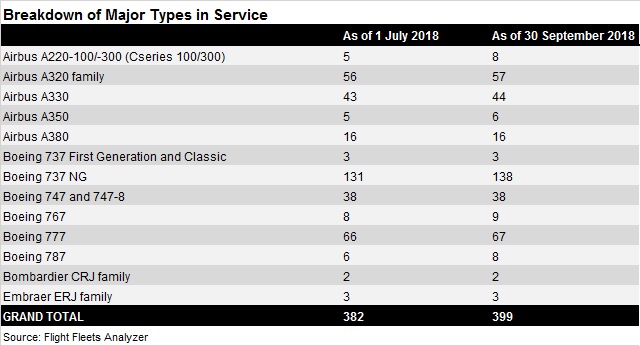