Minnesota-based Sun Country Airlines plans to have at least 40% of its fleet on capital leases or under direct ownership by end-2019, as it moves away from operating leases under an extensive plan to overhaul costs following a change in ownership earlier this year.

The all-Boeing 737 operator recently took delivery of its first owned aircraft, a 737-800 purchased from AerCap and previously operated by Aeromexico. Registered N861AM, the 17-year-old aircraft is also the first in Sun Country's fleet to feature the airline's new livery.

In the coming weeks, Sun Country will take delivery of the aircraft's sister aircraft, a 737-800 registered N860AM.

The airline plans to add six aircraft in 2019 and remove three of its four 737-700s for a net growth of three aircraft, ending the year with a total fleet of 33, Sun Country chief executive Jude Bricker told reporters at a media event at the airline's Eagan, Minnesota headquarters on 11 December. Up to 15 of those aircraft could be directly owned or on capital leases, he says.

In the coming years, the carrier plans to grow by about three to six aircraft per year and is actively looking for used 737-800s in the age range of 12-13 years.

For 2019, Sun Country has committed to three aircraft on capital leases that will deliver in the second quarter, Bricker tells FlightGlobal. He declines to name the companies the airline is working with on the deal.

The airline is switching to an ownership model as it overhauls its cost structure under new owners. Funds associated with private equity firm Apollo Global Management closed its purchase of the airline from the Davis family earlier in 2018.

With the help of Apollo, Sun Country is investing more than $90 million in various projects, including a $20 million cabin reconfiguration and a new passenger service system.

Bricker, who joined Sun Country in 2017 after previously serving as chief operating officer at Allegiant Air, says owning aircraft is a "dramatically better deal" for the airline in the longer run. He estimates that it will cost the carrier about $25 million to purchase a used 737-800, compared with about $37 million in lease payments and maintenance costs on an operating lease.

"Ownership is really, really important to us," says Bricker. "But it will take a really long time." The final operating leases in the airline's fleet, covering one 737-700 and 737-800 respectively, run until 2026.

The airline is exploring all options to acquire aircraft off leases, he adds. "Everything that is brought on will be owned or at least have the lease structure that will allow us to own it."

In 2019, Sun Country will phase out three of its four 737-700s – a variant that the airline no longer wishes to operate. The departure of those aircraft will help Sun Country attain its goal of reducing CASM ex fuel to about 6 cents, down from 8.25 cents currently, says Bricker.

In the past year, Sun Country has embarked upon a plan to reach its unit cost goals under new ownership and management. It removed the first-class product from its aircraft, is adding more seats to its 737-800s, and began charging for carry-on bags.

While those changes place the airline in the company of other low-cost carriers, Sun Country is resisting being lumped together with discounters such as Spirit Airlines and Frontier Airlines.

Sun Country executives point to the public relations woes that have befallen ultra -ow-cost carriers like Spirit, which in recent years have rolled out efforts to improve their reputations among airline customers.

"There's a negative revenue impact to being classified as [a low-cost carrier]," says Sun Country chief marketing officer Brian Davis. He argues that if Sun Country was truly a low-cost carrier, it would have squeezed another six seats on board its aircraft in its ongoing seat reconfiguration.

The airline's 737-800s will have a total seat count of 183 after the modification, up from 168 previously. All of its 737-800s will have the work completed by the end of January. After the reconfiguration, the airline will offer a single class segmented into three seating options.

The "best" seating option, available in the first five rows of the aircraft, comes with a 34in seat pitch, additional seat recline and priority boarding. This is followed by a seat with 32in seat pitch, and finally a standard seat with a 29-30in seat pitch. 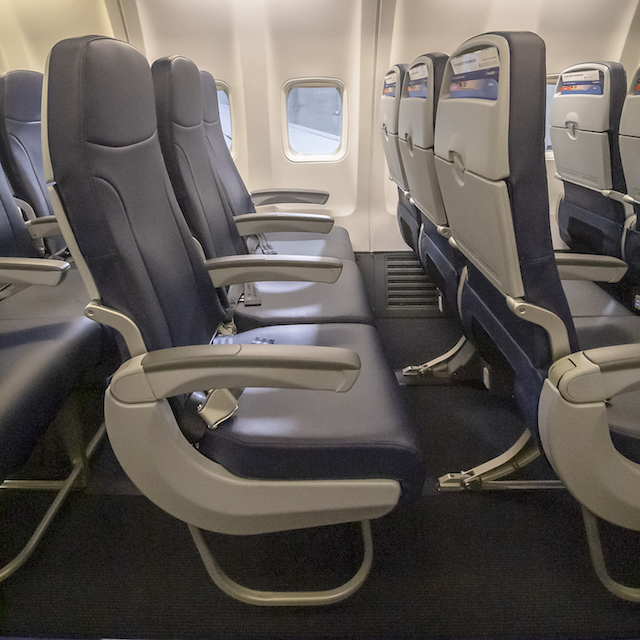 As part of the cabin reconfiguration, Sun Country will offer streaming in-flight entertainment on board at no charge to passengers' personal electronic devices.

Sun Country's efforts to lower costs in have shown some early results. The carrier reported a net profit of $28.3 million in 2017, which was the most profitable year in the airline's 35-year history, notes Bricker.

The airline's aggregated earnings over 20 years ending in 2017 were negative $200 million. "It was not exactly a blazing path of success," he says.

Sun Country expects this year's result to be flat on 2017, despite higher fuel costs, says Bricker. The airline reported a net profit of $24.4 million in the first quarter of 2018, but a net loss of $2 million in the second quarter, according to financial data filed with the US Department of Transportation. Bricker says the first quarter is "by far" the airline's most financially profitable quarter, driven by winter-weary travellers who head south to warmer climates.

In the coming years, the airline plans to continue focusing on serving the infrequent leisure traveller, who makes up the majority of its customers. This means more growth on seasonal leisure routes from both Sun Country's base in Minneapolis and other US source cities.

"There is such a deep market flying Minnesotans to warm weather destinations," says Bricker. Transcontinental flying in the summer has also seen strong demand, he adds. For example, Sun Country is currently in talks with Washington Dulles airport and could resume seasonal service there next summer from Minneapolis, says Bricker.

Yil Surehan, vice-president of airline business development of the Metropolitan Washington Airports Authority (MWAA), says the airport is in "high-level discussions with Sun Country". He tells FlightGlobal that the MWAA is hopeful that the airline will return to the airport soon.

With the dramatic changes taking place at Sun Country, Bricker acknowledges that the process has not been easy.

"We identified some things we could do to get Sun Country to average profitability," he tells reporters. "The execution turned out to be much harder, not surprisingly."

The airline encountered pushback from the local community in Minnesota, for one. "The perception from the community was that... we were a bunch of outsiders coming in and taking away a brand and company from them that they had a lot of affinity with… They reacted somewhat negatively to the process."

An unexpected blizzard in April did little to improve the situation, when Sun Country cancelled flights and passengers were left stranded at their destinations. The airline has since beefed up its customer service call centre operations and says it will purchase travel insurance on behalf of passengers who are travelling on the final flights of the season to give customers peace of mind.

Due to the airline's brand history in Minnesota, the carrier learnt that it could not execute change as quickly, says Bricker. "We are a little constrained by our history here in the local market… it just can't be as dramatic as Spirit's turnaround."

He declines to speculate on owner Apollo's long-term plan for the airline, but acknowledges that "they won't hold us forever".

"We are so early on in the investment," he says. "How they exit and when they exit is not an area of conversation with them."

In the meantime, Bricker and his team are heavily focused on making the business more valuable.

"If we are still talking about change management with them [Apollo] this time next year, they will be disappointed."