Drive for a little over an hour and a half along the UAE’s highway E311 and you will pass no fewer than four international airports, each at a very different stage of development. Starting at Sharjah – base of one of the Middle East’s leading low-cost airlines, Air Arabia – you will soon arrive at the turn-off to Dubai International. Emirates’ home airport has long since left London Heathrow in its wake as the world’s busiest international hub and, with passenger numbers racing towards 100 million, is straining to add capacity within a perimeter that cannot be extended.

Travel another 45 minutes into what was once desert and you will reach the vast expanse of Al Maktoum International – previously known as Dubai World Central or DWC – and its surrounding, fast-emerging “airport city”, marketed as Dubai South. Handling seven million passengers a year, together with most of Dubai’s air freight, it is still very much the city’s second airport. However, with an infrastructure plan that amounts to constructing multiple runways and a whole new district of Dubai, the ambition is to turn DWC into the world’s largest airport by the 2030s.

Follow the E311 to Abu Dhabi and, as you approach the nation’s capital you will see the gleaming new Midfield Terminal of that city’s international airport, due to open in the second half of 2019. Operator Abu Dhabi Airports (ADAC) believes the showpiece building – designed to replace a much smaller Etihad terminal and an older one dating from the 1970s – will serve as a prestigious gateway to Abu Dhabi and become the region’s most comfortable and efficient transit point for connecting passengers.

Having world-leading hubs, as well as best-in-class airlines, is vital to the global aspirations of the UAE’s rival emirates. With most Etihad and Emirates passengers arriving at their airports only to depart on another flight within hours, providing a seamless and stress-free transit is vital. Meanwhile, less than an hour’s flight away – if such a journey were permitted in the current climate of tension that exists between the Arab neighbours – Qatar’s impressive, three-year-old Hamad International offers transcontinental travellers a third route through the Gulf. 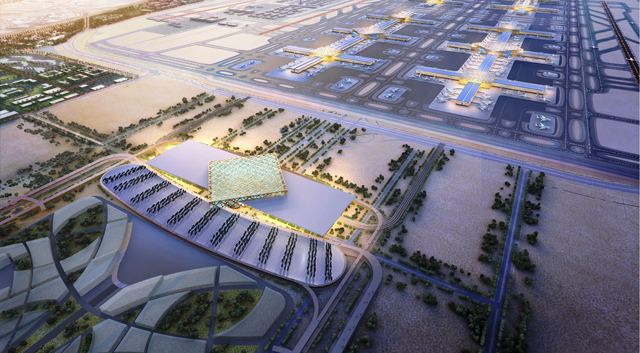 If the opening of Hamad International in 2014 presented a threat to Dubai International’s regional pre-eminence, no one seems to have told the more than 85 million passengers of Emirates and other airlines who passed through DXB in the 12 months to June – an increase from just over 72 million in the corresponding period in 2015-2016. DXB has been number one in international passengers for the past three years and now lags only Atlanta and Beijing – with their much larger domestic market shares – in terms of overall numbers.

Accelerating passenger numbers may be a nice problem for an airport operator, but it is a problem all the same. “We’re bulging at the seams,” admits Paul Griffiths, Dubai Airports chief executive. DXB is ringed by roads and buildings and – unlike its desert counterpart, DWC – cannot grow outwards. Dubai Airports has got around this with a rapid infrastructure programme, relieving pressure on the overcrowded Terminal One by opening a new satellite concourse, D, last year. There are also plans to expand Terminal Two, used chiefly by low-cost and third-tier carriers.

Although the medium-term strategy remains to persuade more airlines to move to DWC to free capacity at DXB – most freight operators and much of the business aviation traffic has already relocated – Griffiths admits most carriers still prefer the city centre airport, for connections and ease of access to Dubai itself. However, as “slots become increasingly difficult” at DXB, due to the growth of Emirates and its sister, low-cost carrier Flydubai, he thinks there will be a “natural migration” to the new airport, where there is plenty capacity.

The two state carriers make up three-quarters of DXB’s traffic – although with proportionally fewer slots because of Emirates’ large Airbus A380 fleet. Emirates has its own terminal – T3 – while plans to integrate some Emirates and Flydubai operations presents a further challenge for the airport; Flydubai operates from T2 on the other side of the twin runways. However, Griffiths points out that, while Emirates and Flydubai are driving DXB’s growth, 90 airlines use the airport, with Concourse D an indication of how Dubai Airports is improving its offer for foreign carriers.

Other ways Griffiths is looking to “stay ahead of the growth curve” include improving passenger flow. “Airport capacity means two things: the physical space and the speed you are able to go through it,” he says. “if you double throughput, you double capacity. It’s a lot cheaper than doubling the size.” Ideas include a system to process check-in baggage before passengers arrive at the airport and “a massive data collection exercise” that will allow Dubai Airports to better manage where and when the pinch points are and allocate staff accordingly.

A new airport operations control centre – “the biggest in the world” – will allow Dubai Airports to co-ordinate “all our stakeholders”, from making sure there are enough taxis to having sufficient immigration staff on duty, says Griffiths, who has run the business for the past 10 years. There is a plan to reduce minimum connection times between Emirates flights in T3 from 75min to 60min, and Dubai Airports is also examining how passengers connecting between Emirates and Flydubai flights can move quicker between terminals.

While it remains unlikely that Emirates will move to DWC in the 2020s – as originally mooted when development of the new airport began a decade ago – the one-storey terminal building is being expanded to take capacity to more than 25 million by early next decade. “That will allow us to start to migrate more of our operations,” says Griffiths. However, no airline will be compelled to move before it is ready. “Dubai has always operated a very liberal and open air services relationship. We are not planning to change that,” he says. “People will be able to make the choice.”

Over at Abu Dhabi, that emirate’s most complex infrastructure project is rapidly taking shape, although the Midfield terminal – “the most innovative in the world”, according to ADAC acting chief executive Abdul Majeed Al Khoori – is still almost two years from opening. One of the most crucial elements of the 65m-high structure – the curved roof – will be fully in place by the end of November, and numerous other elements, such as the four piers and the glazing, are almost complete.

Majeed maintains that with its “high-tech integration and connectivity”, the new terminal will “develop the UAE capital even further as a major international hub”. He says: “It’s an iconic building that gives positive messages to passengers and raises the profile of Abu Dhabi. Abu Dhabi is always looking for the best. This terminal is one of a kind. You have space, technology and innovation, all of which will improve the passenger experience.”

It now looks likely that other major carriers serving the emirate will now share the Midfield terminal with Etihad. Originally, the plan was for the facility to be dedicated to Etihad and its partner airlines. However, with the flag-carrier’s expansion strategy hitting turbulence with the collapse of Air Berlin and the administration of Alitalia, Etihad will not need the entire terminal in the short run. “The plan is to move everything to Midfield,” says Majeed. “We have many options for the existing terminals, including using them for low-cost [airlines].”

While the rift with Qatar has frozen out flights between Doha and most of its Gulf neighbours, Hamad International says the first six months of the year were its busiest six month period yet, with 19 million passengers, 8% more than the same period the previous year, and a 19% growth in cargo to 980,000 tonnes. The Qatar Airways hub opened in mid-2014 after several delays, replacing the older Doha International. Qatar plans further expansions to take capacity to almost 70 million by the turn of the decade.

Other Gulf nations may struggle to match the ambitions of Abu Dhabi, Dubai and Qatar, but there is plenty of airport development elsewhere. Oman is due to open its new terminal in the capital Muscat by the end of this year, taking capacity to 12 million, with a strategy to increase that to more than 40 million in a series of phased extensions. Meanwhile, Bahrain – the region’s original hub in the 1970s and 1980s – has spelled out details of its airport modernisation programme, which includes improvements to the terminal to allow it to handle 14 million passengers a year.