ANALYSIS: The lessors most exposed to Air Berlin

As they provide all bar three of Air Berlin's 146 aircraft, lessors are highly exposed to the German carrier's decision to file for insolvency.

The two largest lessors, AerCap and GECAS, have the biggest exposures to Air Berlin. AerCap has four Airbus A320s and 10 A330s on lease to the German carrier, while GECAS has a total of 24 aircraft with the Oneworld member, Flight Fleets Analyzer shows: 20 A320s including six wet-leased to Eurowings, three LGW-operated Bombardier Q400s, and one A330.

At least 11 other lessors have three or more narrowbodies with the carrier, among them Avolon, which has a total of 13 aircraft on lease to Air Berlin – including three delivered directly into storage and six wet-leased to other carriers.

One lessor confirms to FlightGlobal that it has been managing down its exposure to the ailing airline and has adequate security in place with maintenance and cash reserves.

"Of the four US listed lessors, only AerCap appears to have any meaningful direct exposure: notably the 10 widebodies," writes Gary Liebowitz, a senior analyst with Wells Fargo, in a note issued following Air Berlin's insolvency filing.

"Our concerns are tempered by the fact that: (1) it is doubtful that AerCap was too surprised by this announcement, and we suspect probably 'shadow-marketed' many of these planes already; (2) no lessor is more prolific in moving widebodies; (3) several of these planes could remain in service (Air Berlin's flights will continue) and Lufthansa already has stated it is looking to take over parts of the Air Berlin group; and (4) Ascend's estimated AerCap exposure could be overstated since the lessor has been selling a lot of planes year-to-date, and often there is a lag before transactions appear in the database."

AerCap declined to comment on its position earlier this month when FlightGlobal contacted executives, and did not return requests for comment after Air Berlin's insolvency filing. However, as one of its biggest creditors AerCap probably has some leverage with the carrier in terms of what happens with its fleet.

GECAS, meanwhile, tells FlightGlobal: "We are aware that Air Berlin has made an insolvency filing... Air Berlin is a longstanding customer of GECAS and we cannot discuss the details of our business with the airline at this time unless the they ask us to do so."

While it is too soon to know what will happen to Air Berlin, rumours are circulating that Lufthansa might subsume the carrier into its operations. In the case of a change of ownership, the dominant positions that AerCap and GECAS hold could actually be beneficial in negotiations, especially if Lufthansa wanted to keep the aircraft for its low-cost operations.

Ultimately, lessors could end up with exposure to a good credit, though one lessor warns not to be blinded by the Lufthansa logo if the deal isn't getting the benefit of the Lufthansa credit. 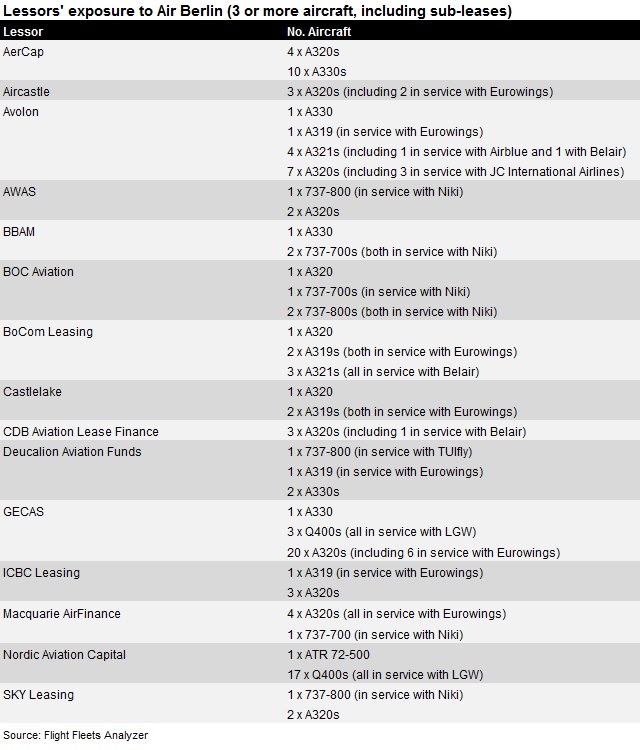 Table updated after SMBC told FlightGlobal that it had sold two aircraft in 2015 and another two last year, reducing its exposure to zero