ANALYSIS: The path to an A380 century at Emirates

The landmark delivery to Emirates of its 100th Airbus A380 this month marks a key milestone in a journey that has its roots at the very start of the superjumbo programme.

Emirates has carried some 85 million passengers aboard its A380 fleet during its nine years of operations, but few – even the airline itself – could have imagined what a crucial role it would play in establishing the aircraft on the global stage when Airbus was first talked about the "A3XX" (its pre-launch moniker) back in the 1990s.

That said, the Dubai carrier was a strong advocate of the very large airliner (VLA) concept when Airbus was first dreaming about building a "double-decker". As far back as 2000, the airline viewed the A380 as a no-brainer, and 17 years on has 100 aircraft serving almost 50 destinations.

When it comes to being an early adopter, Emirates led the way with the A380. On the opening day of the 2000 Farnborough air show, Emirates chairman Sheikh Ahmed bin Saeed Al Maktoum became the first customer to sign a commitment for the A3XX. He put pen to paper for five passenger aircraft, two freighters and five options, valued at $1.5 billion.

While this seems a relatively modest deal, at the time Emirates had a fleet of just 30 aircraft – a mix of Airbus A300/A310s and A330s along with 11 Boeing 777s. Indeed even Airbus wasn't expecting the Gulf to contribute much to the overall A3XX sales story, forecasting that it would account for just 1% of the 1,235 deliveries in its 20-year VLA delivery estimate. 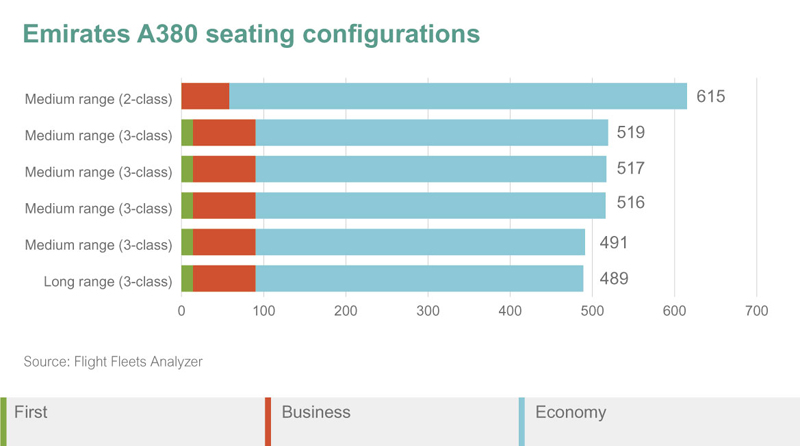 Al Maktoum told the gathered press corps at that 2000 Farnborough show that Emirates would use the aircraft on routes to Europe, particularly London, as well as Southeast Asia and North America.

The airline group's then-managing director, the late Maurice Flanagan, declared that he could not understand why other airlines had not been quick to follow Emirates' lead and commit to the type. The decision to buy the big jet was based on "simple arithmetic", said Flanagan.

"Take-off and landing slots at major airports will continue to be tight and we will need a bigger aircraft than our present Boeing 777-300,” he said. "With world passenger numbers growing at 5% a year, I don't know what other airlines are waiting for."

The November 2001 Dubai air show was the venue for the firming up of Emirates' A380 order. Coming just two months after 9/11, the firm deal – which expanded its A380 commitment to 22 orders and 10 options – gave the aerospace industry a vital boost at a difficult time. Soon after, Emirates delivered a shock to its incumbent engine supplier Rolls-Royce when it signed for the rival Engine Alliance powerplant for its A380 order. The surprise deal announced at the 2002 Singapore air show provided Flight Daily News with one its legendary cover splashes: "Sheikh rattles Rolls".

When its A380 deal was originally signed, Emirates was expecting deliveries to begin in July 2006. But after Airbus suffered a raft of early production delays, the airline had to wait an extra year for its new toys.

When the first aircraft was finally ready, in July 2008, the Emirates team led by Al Maktoum and airline chief Tim Clark were taken on a tour of the 489-seat cabin by Airbus's then boss Louis Gallois. All were delighted with what they saw, which included a large "bar in the sky" and two onboard showers for first-class passengers. Clark said the delivery process for the first A380 went "like clockwork". 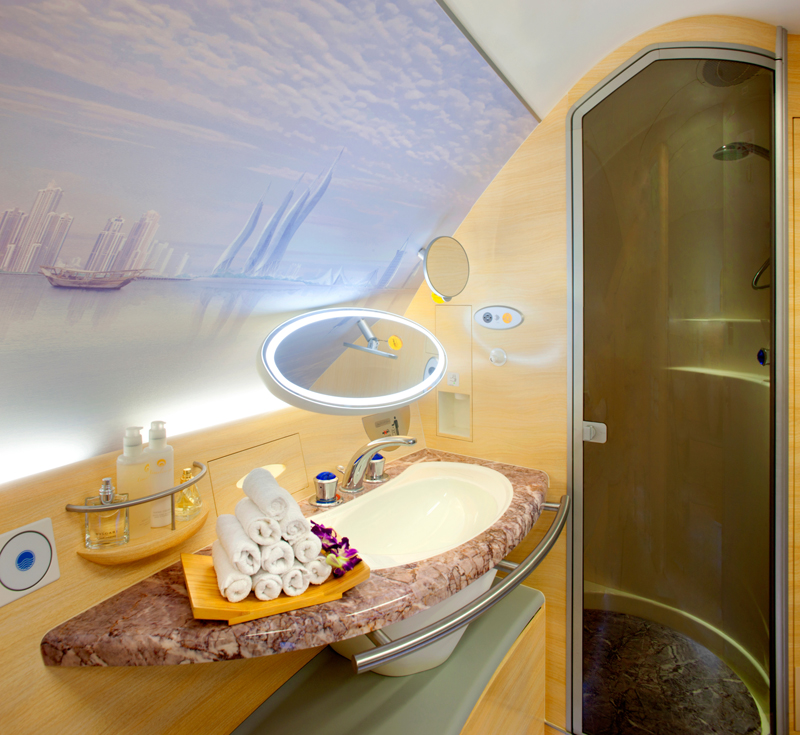 By the time of the first delivery, the airline's A380 backlog had expanded to 60 firm orders. The airline's in-service fleet had also grown significantly, numbering about 120 aircraft. The double-deck entered service on 1 August between Dubai and New York JFK.

Clark had been one of the architects of the A380 from the start, and he could not hide his admiration for the aircraft when FlightGlobal spoke to him in 2009 for our A380 in-service report, Judging a giant.

"Despite a teeth-pulling two years through all the delays et cetera, this aeroplane is a peach," he said. "She goes through turbulence like a huge Queen Mary 2 on the North Atlantic in January.

"Once you've flown on it you will not want to go [any other way] if you have a choice – which will make them feel very ill in Seattle."

Clark was also more than satisfied with the A380's performance: "The faster the A380 flies, the less fuel it burns."

Another potential pain-point – handling upwards of 500 passengers on every turnaround – had also proved straightforward through good design and planning: "All the airports that the type serves have been well prepared for the aircraft," Clark said. "With air bridges to main and upper deck passenger enplaning and deplaning is poetry in motion." 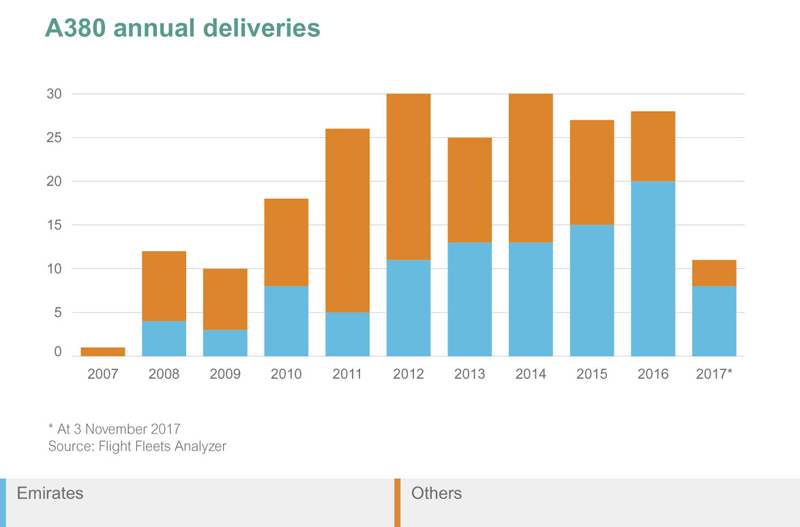 Two years into its A380 operations, Emirates signed an $11.5 billion deal at the 2010 ILA air show in Berlin for 32 more aircraft, bringing its overall commitment for the type to 90 aircraft. Clark described the deal as "simply an extension of the growth strategy which have been doing successfully for quite a number of years".

He also gave a fairly solid indication that even more were likely to be ordered, saying: "The mapping of the airline actually sees a lot more A380s needed than even that number, and I know that’s difficult for a lot of people to stomach."

So it was no surprise when Emirates signed another massive A380 order, this time for 50 aircraft, at the opening day of the 2013 Dubai air show. The deal took Emirates' A380 firm commitment to 140 aircraft, and Al Maktoum confirmed that some would be used for replacement while others would be part of a further expansion.

Crucially, Emirates decided to run an engine competition for the new batch, and in April 2015 Rolls-Royce was able to exact its revenge for the loss back in 2002 by displacing the incumbent Engine Alliance. Clark had been pressing Airbus for some time to develop a re-engined "A380neo" version which he estimated could offer an economic improvement in the 10-13% range, and he left the door open to taking some of the Rolls-Royce-powered A380s with a new engine.

The Emirates A380 fleet passed a key milestone in July 2014 with the delivery of its 50th aircraft and the following year the airline marked another first for the Airbus superjumbo when it introduced the first two-class aircraft. The denser configuration increases seating by almost 100 passengers to 615 seats, with 58 business-class and 557 economy-class seats. Initial destinations for the 615-seater were Birmingham in the UK, Prague, and Taipei.

Despite much talk, the "A380neo" studies have so far come to nothing. But a less radical improvement package based on large winglets and weight improvements emerged at the Paris air show this year. With the "A380plus", Airbus clearly had Emirates in its sights, but Clark indicated he needed more convincing about the long-term future of the programme before signing any deal.

Although a slowing of growth rates in recent times has prompted Emirates to stretch out some of its A380 deliveries, it apparently has not dampened its appetite for more. Emirates' oldest A380, delivered in 2008, is set to be retired when its financial lease ends in 2021 and it may need more aircraft to replace its early machines. 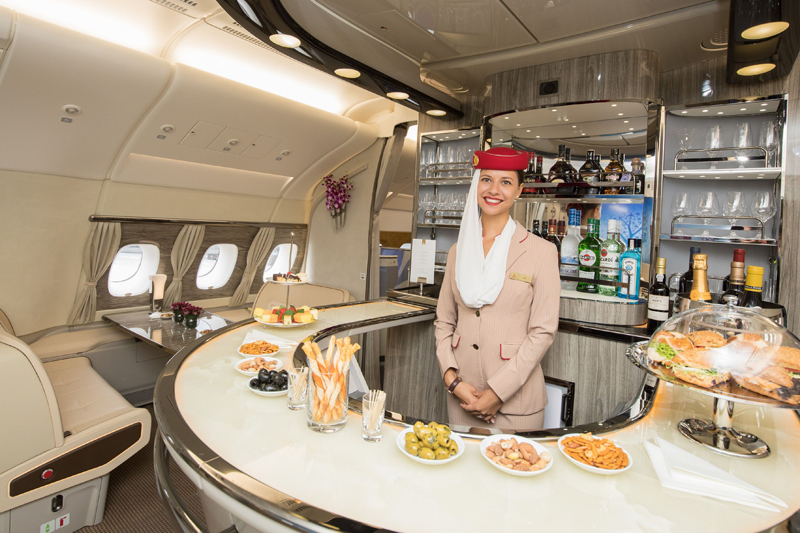 Speaking about the A380plus, Clark said Airbus was well aware that Emirates wanted to "continue buying A380s" and the airline was interested in any improvements being considered. But he indicated that with the A380 output being slashed amid a drought in orders, he was reluctant to place more orders ahead of clarity around the future of the programme.

That reassurance was made at the delivery of the 100th aircraft to Emirates at a ceremony in Hamburg on 3 November, when Airbus chief executive Tom Enders said: "I am convinced we will still produce A380s 10 years from now."

He added: "We certainly work hard to please customers – not just Emirates, but other customers." Enders also confirmed that Airbus was making efforts "to keep the aircraft competitive for 2030 and beyond".

Speaking at the event, Al Maktoum sang the A380's praises, and confirmed that Emirates had held talks about more orders and was "very interested" in the A380plus.

"For Emirates, the A380 has been a success. We've been able to utilise it at slot-constrained airports, as well as at regional and 'secondary' airports where we have grown passenger demand," he said.

"Each time we deploy an A380 onto a route, it typically stimulates further traffic and demand as travellers are attracted by our flagship A380 experience. We remain committed to the programme and will work closely with Airbus and our partners to continually enhance our A380 product as we look ahead to receiving our remaining 42 aircraft on order."

But that landmark delivery also highlighted how reliant Airbus has been on the Dubai carrier to sustain A380 production. Emirates has taken 45% of the 218 aircraft delivered to date, and all but three of the 11 deliveries completed so far in 2017. 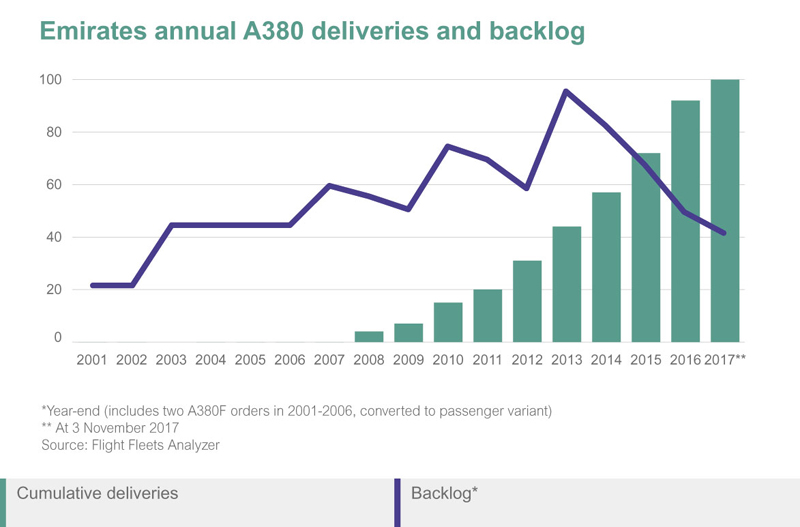 Emirates also accounts for almost half (42) of the 99 A380s on backlog. Flight Fleets Analyzer shows that lessor Amedeo is the second-largest customer with 20 on backlog – although deliveries have been deferred. Another 24 orders are assigned to All Nippon Airways, Qantas, Qatar Airways, Singapore Airlines and Virgin Atlantic, while the remaining 13 are listed against an unidentified customer (10) and an entity called Air Accord (three). The delivery schedules for these 13 – as well as Qantas (eight) and Virgin Atlantic (six) – are unclear.