Recent data provided to FlightGlobal shows that Canadian manufacturer CAE is responsible for 20% of the military simulation devices currently in service around the world. L3 Link Simulation & Training (L3 Link) follows with a share of 18%, while Boeing and FlightSafety International (FSI) account for 11% and 10% of the market respectively.

Thales devices represent a share of 9%, while the balance of the world’s military simulation devices were built and provided by other manufacturers.

Devices designed for military aircraft simulation total more than 2,700 units. Data shows that 15 new military simulators have been delivered so far in 2018. CAE provided 10 of those, L3 Link shipped two, while Boeing, FSI and Thales each provided a single device.

A total of 22% of the simulators are for Lockheed Martin aircraft, and 17% are for Boeing types.

The USA has just over 1,500 simulators currently in service – a market share of 55%. Nearly half of these devices are operated by the US Air Force alone.

At the end of 2017, L3 Link announced that it had been awarded a Swiss air force contract for the service life extension of the Swiss Hornet Operational Training Systems (SHOTS). The SHOTS consist of four fully networked mission simulators designed for immersive mission training, and the upgrade is scheduled for delivery in 2020. Recent contracts

At the beginning of 2018, the Italian Air Force accepted into service a CAE Predator mission trainer located at Italy’s Amendola air force base. The Predator unit, specifically representing the Italian air force’s General Atomics Predator A, was jointly developed by CAE and General Atomics. 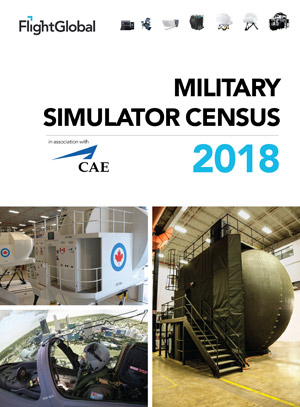 CAE was selected by the emirate to provide a training centre, a suite of simulators and training devices, and support services.

Also in March, FSI announced the entry into service of a new Boeing 777-300ER full flight simulator the company built for use by the Japan Air Self Defense Force to train crews for operation of their new VIP transport aircraft. The simulator was installed at the Chitose air base in Hokkaido.

In the second quarter of 2018, CAE USA was awarded a contract by the United States Navy under a US foreign military sales ­programme to provide the Brazilian navy with a comprehensive Sikorsky S-70B Seahawk helicopter training system. CAE will design and manufacture two S-70B training devices: a fixed-base S-70B operational flight trainer to be used for pilot training, along with an S-70B weapons tactics trainer to be used for training rear-crew sensor operators and airborne tactics officers.

Also in July, CAE launched the CAE 700 Mission Reality (MR) Series FTD at the Farnborough air show. The CAE 700MR is designed specifically for military helicopter flight and mission training and is based on the company’s CAE 3000MR series full-mission helicopter simulator. A key difference is that it is in a fixed-base platform. A month later, the New Zealand Defence Force awarded CAE a contract to provide a single unit of the device. The contract also includes the provision of long-term maintenance and support services upon delivery of the simulator to RNZAF Base Ohakea in 2020.

In October, CAE launched its Medallion MR e-Series visual system for military fighter and fast-jet training, which includes a back-projection 360° dome display system, laser projectors and CAE’s Medallion image generators. The system is available for new training systems as well as for updates to existing systems.

In the same month, L3 Technologies celebrated the opening of its expanded L3 ­Arlington training center in Arlington, Texas. The multi-purpose training centre provides simulation and instruction for both military and commercial pilots and classroom facilities. The expansion to the site adds approximately 3,720m2 (40,000ft2), more than doubling the size of the high bay facility. The new facilities include room for six additional ­full-flight simulators, classrooms incorporating augmented and virtual reality systems, and customer dedicated spaces.