ANALYSIS: Values outlook poor for A380 after termination decision

The momentous decision by Airbus to end the A380 programme was really the only logical option, given the almost nonexistent market faced by its sales team in recent years.

A similar scenario has faced those marketing the few young second-hand A380s that have come on the market so far. One ex-Singapore Airlines aircraft has found a home with wet-lease specialist Hi Fly (below) – with a second acquisition planned – but two others have been sent for parting out. 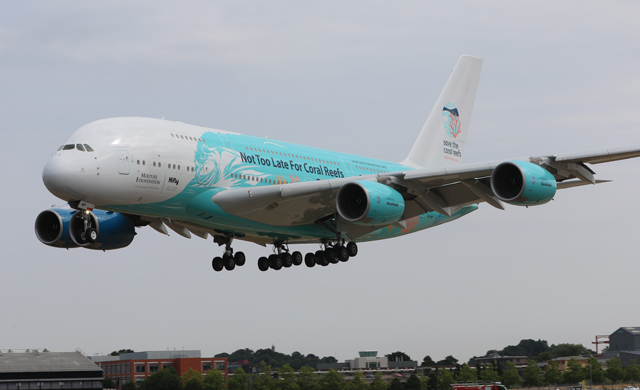 Following its "painful" decision to close the programme, Airbus will make the final A380 deliveries in 2021, with around 250 aircraft built. But what are the prospects for trading among the used fleet?

Ascend by Cirium made its most recent assessment of the likely impact of production's cessation on used values prior to the decision being announced: That assessment was relatively positive: "It may actually benefit used A380 values a little bit, although depreciation is likely to remain steep."

However, Ascend's global head of consultancy Rob Morris explains that the market scenario under which this opinion was formed has changed significantly.

"The backlog of 87 firm orders at 1 January 2019 has now reduced to only 17 aircraft following the order cancellations that came amid the decision to end production," he says.

"With the extremely limited operator base, a number of whom have already made negative comments about their long-term plans for the aircraft, it is clear that the secondary market for the A380 will be extremely challenging."

Morris says existing operators have largely declined to add additional new A380s, and if they do decide to acquire from the used market they will likely only be prepared to pay a price that is net of the reconfiguration and maintenance costs required to place the aircraft into their network. "This is likely to drive negative pressure on A380 market values. In addition, the relatively short production cycle and accelerated removal-from-service plans for several existing operators suggest that depreciation will be... significantly greater than typical for commercial aircraft types." 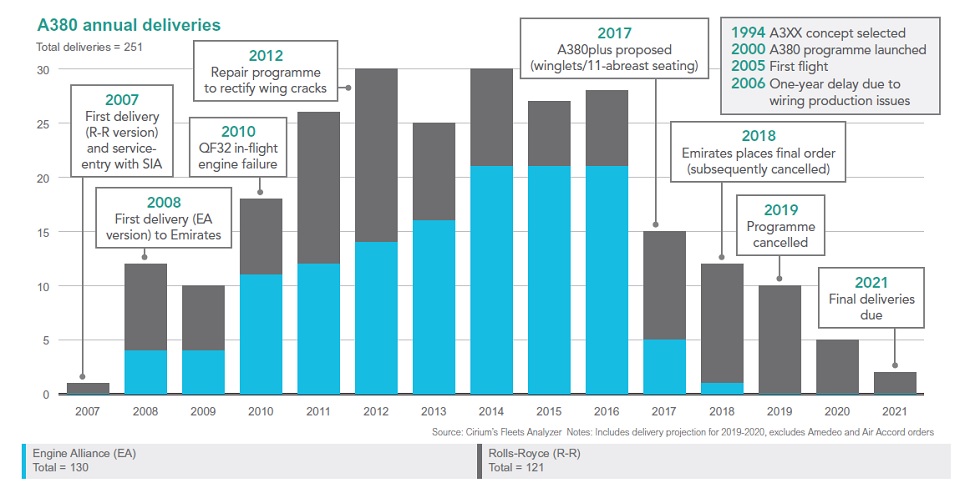 Bert van Leeuwen, managing director of aviation research at DVB Bank, concurs that the outlook for second-hand A380 values is not bright.

"A380 values are already difficult to establish as nobody wants to reveal how low they are. I suspect if four or five aircraft can't find a home, any more coming off lease will just worsen the situation," he says.

He believes that with production to end within three years, the value even for airframes being parted out will decline.

"You can compare the situation to the A340-600 a few years ago, but with higher amounts," he says. "It will turn out [that] residual-value risk on many A380s is with financial investors.”

The cargo sector has been a key second-hand market for the A380’s predecessor, the Boeing 747. Many passenger 747s have found a lengthy second life following freighter conversion. However, this is an unlikely scenario for the A380, largely due to its engineering design, which makes its secondary market even more challenging.

No cargo conversion currently exists and the A380's design – specifically the positioning of the upper deck floor – is not optimal for passenger to freighter (P2F) conversion, says Morris. "Thus, the likely cost of any solution will be potentially prohibitive."

This could also have consequences for the payload performance of an "A380 P2F". As Morris points out: "The conversion would potentially be suboptimal since it would have a lot of volume for the potential weight payload. Consequently, we think there is an extremely low chance that the A380 will see a P2F conversion programme in the future."