Ten years after leaving stable jobs at major aerospace manufacturers and thousands of engineering hours later, the founding team of Vanilla Aircraft is on the verge of testing their vision of a long-endurance, diesel engine-powered drone. The company plans to fly its VA001 without refuelling for more than 10 days this May or June, using jet fuel and an off-the-shelf piston engine and autopilot software.

The use of an internal combustion engine to achieve multi-day fight is an unpopular choice these days. Companies such as Boeing and Airbus pursue mostly solar-powered designs. And yet, Vanilla's approach stands out for other reasons, too. The roughly $3 million the company spent over the past decade to reach this point stands in contrast to the large research and development budgets enjoyed by many aerospace manufacturers. Case in point: military drone maker AeroViroment and telecommunications giant SoftBank announced in January a plan to develop a long-endurance platform, with a joint commitment of up to $65 million.

Vanilla's annual budget is about $300,000. That pays salaries for the company's three co-founders – lead aerostructures designer Daniel Hatfield, lead systems engineer Neil Boertlein and programme manager Jeremy Novara – as well as rent and drone development costs. The funding has come through a string of NASA and Department of Defense contracts, says chief executive Tim Heely, a retired US Navy rear admiral who from 2004 to 2008 was responsible for Navy and Marine Corps unmanned systems development, test, acquisition and sustainment.

"We have been surviving on the generosity of the US government in the form of sliver grants, working our way through the trials and tribulations of a small business in a big business world," he says.

"Unfortunately, the way the world works today it is tough today to get noticed unless you are a large company. These guys really persevered."

VA001's potentially record-breaking flight this May or June will follow its five-day 1h 20min flight over the NASA Wallops Flight Facility in Virginia in October. During that flight, the drone covered 7,000 miles (11,265km) by flying continuous 2-mile (3.2km) circuits.

The ability to loiter for days at a time over a spot on a map, as well as efficiently travel thousands of miles, has caught the eye of the US military. The US Naval Air Systems Command will be on the ground to observe VA001 during its upcoming flight and will consider granting contracts for follow-on aircraft on behalf of the Department of Defense, says Heely. 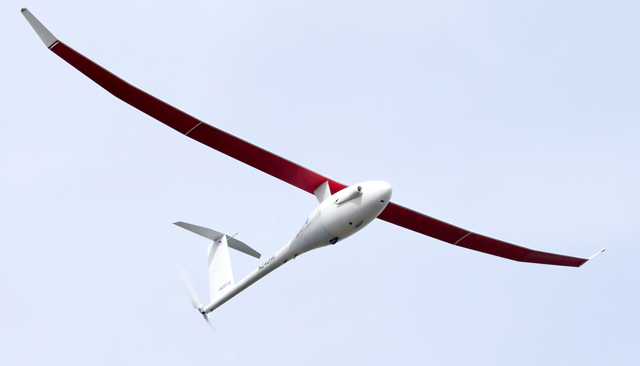 VA001 is described as a "fuel tank with wings", carrying a camera, sensor and radio

Long-endurance UAVs have considerable military appeal, said Phil Finnegan, director of corporate analysis with Teal Group. "Longer-endurance UAVs would be able to do many of the missions of UAVs at lower cost," he says. "They could do electro-optical surveillance, SAR or communications relay.

"They can cut operating costs by reducing the personnel required for operation, as a result of having many fewer landings and take-offs. Greater endurance also means that fewer UAVs are needed to maintain a patrol."

VA001's wing – 11m (36ft) long, narrow and arched – looks like that of a glider, though the company says the aircraft doesn't glide or soar on thermal columns of air like a sail plane. Rather, it stays aloft for days at a time using its engine and a pusher propeller.

The company won't disclose the name of the internal combustion engine it is using, except to say that it is a diesel which runs on JP8, a kerosene-based fuel also used by the US military to power jet fighters and Humvees.

"It's not earth-shaking but it's another of a long list of clever – some might say brilliant – uses of existing hardware that the three founders came up with," said Heely of the diesel engine. "They found an engine that had a lot of hours on it, and was affordable and off the shelf, and they built an airplane around that."

The aircraft is launched on a sled by a 300m (1,000ft) towline attached to a pickup truck. Once in the air, the aircraft flies via GPS and Piccolo autopilot software, with constant oversight by a licensed pilot, per Federal Aviation Administration rules. To land, power is cut to the engine and it glides back down to Earth at about 40kt, touching down on a centrewheel.

He adds that when the aircraft completed its five-day test flight in October 2017, it landed with three days of fuel remaining on board, as the team decided to land early to avoid a brewing storm. On that flight, VA001 carried multiple payloads, including a multispectral imager from NASA, and a sensor and radio from the Department of Defense.

Vanilla Aircraft's VA001 also differs from its long-endurance competitors in the altitude at which it flies. While many long-endurance drones operate as pseudo-satellites, at high altitudes in excess of 60,000ft, VA001 flies at up to 15,000ft. Flying at that level puts it in the class of the Boeing Insitu ScanEagle, a commercial UAV that was intended for fish spotting, but has been modified for military use and is able to endure more than 24h below cloud level, said Rand Corp senior engineer Richard Mason, who researches unmanned aircraft.

"When I look at the application of Vanilla Aircraft, one of interest to me is maritime surveillance," he said. "You would want something that could go out, stay out for a very long time and fly below the clouds."

However, Vanilla intends to avoid being pigeon-holed to any specific application or sensor package – hence its plain and unassuming name, says Heely.

Like production versions, VA001 cost about $500,000 to build, estimates Heely: "I don't think it's out of the realm of possibility that the sensors will cost more than the airframe."

The company will for now focus on building a production version of the VA001, but has drawn plans for six other aircraft, including a design that could carry a 250lb (113kg) payload. Heely says he is working to raise about $5 million and examining manufacturing partnerships to build production versions of that aircraft, should contracts come through.

"We would rather not have someone own the whole manufacturing process, for obvious reasons, but if the right person comes in with the right idea we are all ears," he says.

Indeed, after enduring 10 years as an independent and scrappy start-up, the founding team has no illusions about what it might take to manufacture their aircraft at scale, says Heely: "The dream of being 100% independent has shifted, in a good way."

For Vanilla Aircraft, that shift of perspective may come in part from having its office in Falls Church, Virginia. As Heely notes: "We are about a mile and $100 billion from Northrop's headquarters."