But French and US vehicles also candidates for airborne early warning, surveillance and communications relay roles

Singapore Technologies Aerospace (ST Aero) and the Singaporean Defence Science and Technology Agency (DSTA) have revealed details of an optionally piloted air vehicle explored over the past three years as a possible solution to the nation’s Low Altitude Long Enduring Endurance (LALEE) requirement. 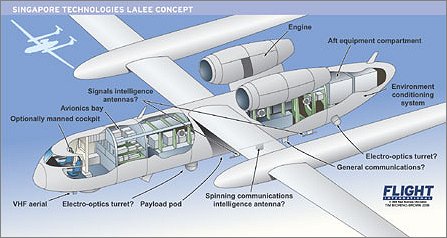 The Singaporean and US governments have also entered formal talks on the potential purchase of the Northrop Grumman RQ-4 Global Hawk high-altitude long-endurance (HALE) unmanned air vehicle as a solution for the same requirement. Singapore is also studying possible cooperation with France on HALE developments.

The LALEE system – effectively a HALE UAV, but called low-altitude by Singapore because it would work in conjunction with the country’s military surveillance satellite programme – would perform airborne early warning, maritime and ground surveillance, and communication relay roles.

The talks with France follow discussions in 2004 about Singaporean membership of the EADS-led Euromale development programme. Peng-Yam Tan, DSTA deputy chief executive (technology), says the move reflects Singapore’s collaboration with a variety of international unmanned systems development efforts, including unmanned ground and underwater vehicles. “We cannot do everything ourselves so for HALE-class UAVs we are embarking on a joint study with France,” says Tan. “We are looking at how a HALE UAV can be used to support some of the operations that we do, especially persistent surveillance. We are only at the front of the study right now; we are not looking at the cost, not the performance,” he adds.

Dr Tan Jiak Kwang, chief engineer and director of advanced systems at ST Aero, says the existing LALEE design studies were based on air vehicle operations at altitudes of 45,000-65,000ft and the use of a modular payload system.

At least three LALEE air vehicle configurations have been developed, at least one of those with the support of Scaled Composites. One of the configurations, designated AA15T, replicates the powerplant arrangement of Scaled White Knight with two jet engines located directly above the wing root. However, unlike White Knight, the AA15T fuselage is suspended beneath the wing and a large satellite antenna blister is located above the fuselage behind the aircraft nose. Two other configurations – designated MO.6 and MO.65 – have a suspended fuselage and wing arrangement similar to Scaled’s GlobalFlyer, but have twin engines mounted high on the rear fuselage. All three configurations have ‘T’ tailplanes which mirror White Knight’s.

Notional interior layout data released by ST Aero shows the LALEE could carry a crew of two, which would facilitate ferrying the vehicle to a deployment site and allow training operations in Singapore.