BA 747 wing tip collides with building while taxiing in Johannesburg

A British Airways 747-400 aircraft suffered damage to its right wing as a result of a collision with a building at Johannesburg's OR Tambo International Airport.

The aircraft, bearing registration G-BNLL, was operating flight BA34 on the Johannesburg-London Heathrow route, British Airways said in a statement. The incident occurred during the late evening on Sunday, 22 December, as the Rolls-Royce RB211-powered aircraft was taxiing.

“The 182 customers disembarked safely and there were no reported injuries onboard the aircraft,” BA says. “Customers were looked after by our staff and provided with hotel accommodation and we are arranging alternative flights for them.” 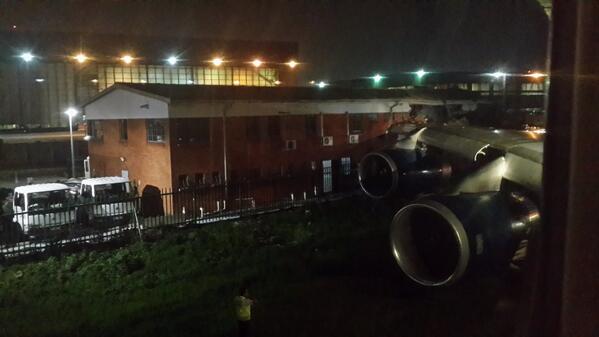 “We have launched a full investigation into the incident and are giving our assistance to the independent South African Civil Aviation Authority [SACAA] with the matter.”

Images that were taken by passengers and posted on social media show that the right wing tip ploughed into a two-storey brick building, creating a large tear in the side of the structure.

Flightglobal’s Ascend Online database shows that G-BNLL was delivered in 1990.