BAE Systems delivered 10 Eurofighter Typhoons in the first half of this year, as the UK company and its European partners wait for further international sales to safeguard long-term production of the type.

Of the aircraft delivered from BAE's Typhoon final assembly line in Warton, Lancashire in the six months ending 30 June, four were for the UK Royal Air Force and six for export customers. These included the last four fighters from a 72-unit Project Salam deal with Saudi Arabia, and the lead pair of aircraft for Oman (one pictured, below), which has ordered 12 for delivery through 2018. 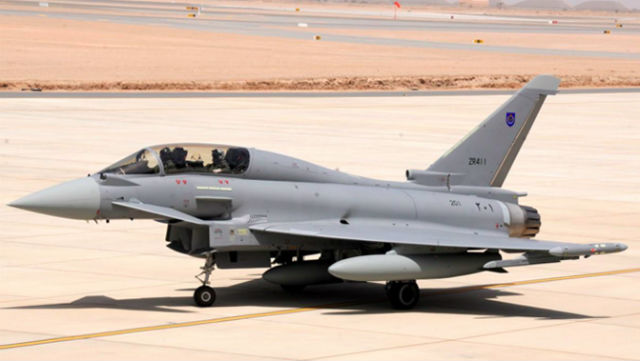 "Typhoon capability expansion is progressing to schedule" for the Royal Saudi Air Force, the company notes, adding that its support contracts with the service also "are operating well".

"Good progress continues to be made on airframe manufacture for the contract to supply 28 Typhoon aircraft to Kuwait secured by Italian Eurofighter partner Leonardo in 2016," BAE says.

"Discussions with current and prospective operators of the Typhoon aircraft continue to support expectations for additional contract awards," the company says. In a half-year earnings report published on 2 August it adds: "However, there can be no certainty as to the timing of these orders, and any new orders are unlikely to positively impact production delivery rates for at least 24 months. The balance of customer demand for aircraft and production rates will be under constant review, with adjustments made as appropriate."

BAE has also updated the status of its Hawk 165 advanced jet trainer programme for Saudi Arabia. Eighteen aircraft from a 22-unit deal signed by Riyadh in 2012 have been delivered so far, and "manufacturing for the second batch of 22 aircraft, awarded in 2015, continues on schedule".

Referring to the follow-on deal, BAE says it "will undertake the final assembly of these aircraft in Saudi Arabia, with the first major units planned to be delivered in the third quarter of the year".

The company will complete the delivery of eight Hawk 166s to the Royal Air Force of Oman before year-end, with the first two now ready for acceptance, and an initial support package already in place.

"Discussions continue with Hindustan Aeronautics [HAL] for the supply of a further 32 aircraft kit sets, which will result in aircraft built under licence by HAL for the Indian air force and Indian navy," the company says.

Meanwhile, 12 of the Royal Australian Air Force's Hawk 127s have been upgraded so far to support pilot training requirements for the Lockheed Martin F-35, with the service having declared initial operating capability with the enhanced fleet.