Boeing  has just committed to the long-awaited launch of the passenger version of the stretched 747-8 after securing a major order from German flag-carrier Lufthansa.

Lufthansa today ordered 20 747-8 Intercontinental jetliners plus 20 options.  The Lufthansa order, with a total average list-price value of $5.5 billion, is scheduled for delivery beginning in 2010. The order gives the go-ahead for the programme. 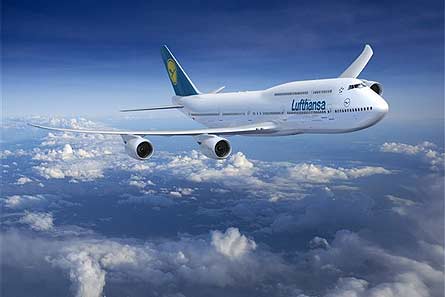 “Lufthansa operates one of the youngest and most environmentally friendly fleets in the world,” said Scott Carson, president and chief executive officer, Boeing Commercial Airplanes. "The 747-8 will use state-of-the-art technology innovations from the 787 Dreamliner to significantly increase the capabilities of Lufthansa’s fleet. This airplane improves upon the economics of the 747-400, while greatly enhancing fuel efficiency, reducing emissions and noise.  We are thrilled that this world-class airline has chosen this world-class airplane.

Although 47 747-8 aircraft have been ordered to date, including three VIP versions for Boeing Business Jets, the remainder have all been for freighters. The Lufthansa therefore marks the first serious penetration into a market that was hitherto dominated by the troubled Airbus A380. Lufthansa ordered 15 A380s plus six options in December 2001, and was originally expected to see the first of its initial four aircraft delivered in September 2007 with the bulk arriving over 2008 and 2009.

However, given the delays to the A380 announced by Airbus, it now seems possible that the first 747-8Is could arrive within a few months of the initial service entry of the A380. The 747-8F is due to enter service in September 2009 with launch customer Cargolux, while Boeing is expected to announce that the 747-8I is aimed at service entry with Lufthansa in mid-2010.

Until now Boeing has been disappointed by the sluggish market response to the 747-8I compared to the -8F which, by contrast, has attracted more early business than it expected with 44 firm sales to-date. The breakthrough appears to be related to Boeing's recent decision to adopt the same 5.6m (18.4ft) stretch of the freighter as the baseline for the passenger version. The company says, meanwhile, that it is leaving the door open to building the longer-range, short-stretch version of the 747-8 Intercontinental to meet the requirements of influential carriers such as Emirates.

Standardising both 747-8 offerings around the freighter increases the 747-8I's typical three-class seating by 17 seats to 467 over the original version offered, but results in a 500km (270nm) range penalty. The original 747-8I had a 2m forward fuselage plug, but the new version's plug is increased to 4.1m. The overhead galley option, which Lufthansa is believed to have shown great interest in, increases three-class seating by 12 seats to 479.

Three -8Fs will be assembled in late 2008 and early 2009 while the final -400Fs are still in build. The initial two -8Fs will be used for the bulk of the flight test effort with the third joining late in the effort in 2009 to complete certification targeted for around July-August 2009. The first -8I is expected to enter assembly in early 2009.