Boeing on 28 December completed a 3h, 32min flight of the 767-2C prototype that will be modified to become the first US Air Force KC-46A tanker.

The first take-off of the 767-2C – powered with Pratt & Whitney PW4062 engines – from Boeing’s widebody final assembly center in Everett, Washington, comes nearly three months behind schedule, as the contractor announced a $272 million forward loss on the programme in July due to problems installing the wiring harnesses.

It also occurs weeks ahead of a pending competition between the KC-46 and the Airbus A330 MRTT for a South Korean tender for four new tankers. 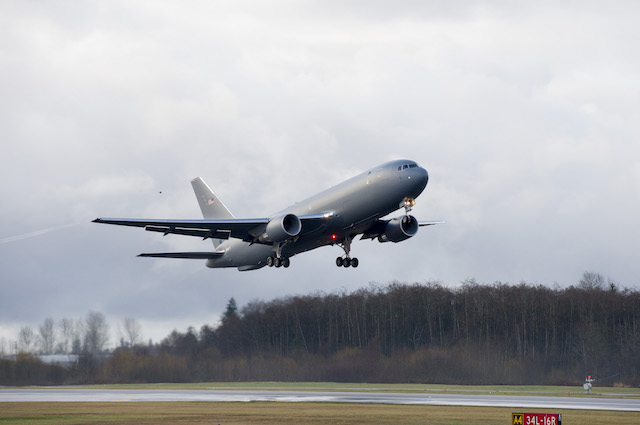 Although the USAF awarded Boeing a $4.4 billion contract in 2011, the deal allows the contractor to recoup another $500 million in additional expenses. Boeing has already absorbed the overrun and reported the $272 million forward loss.

The 767-2C is a new commercial derivative that combines the fuselage of the 767-200ER, wings from the 767-300, the stabilisers of the 767-400ER. and the cockpit displays from the 787. Boeing is offering the aircraft for sale to commercial operators, but so far has received no orders.

The commercial aircraft will be converted into a military tanker and transport. Military systems include a fly-by-wire refuelling boom modeled on the McDonnell Douglas KC-10 boom design, a remote aerial refuelling operator station, wing aerial refuelling pods and military electronics.

The development contract calls for Boeing to build four developmental prototypes. The first and third aircraft to come off the assembly line will be 767-2Cs, which will be used to obtain certification by the US Federal Aviation Administration. The second and fourth aircraft in assembly will be delivered as KC-46As.

The debut flight of the first KC-46A was originally scheduled in January, but is now planned for April 2015.

The USAF plans to buy as many as 179 KC-46As to replace an ageing fleet of Boeing KC-135s, which are similar to – albeit slightly narrower than – the four-engined Boeing 707 transport.